Hot Wheels Unleashed review: the iconic toy cars are back in style

The cars most loved by young and old are back in style. Let's discover Hot Wheels Unleashed together in our review

There was a time when everything was play, and even simple plastic toy cars could give us great emotions just by setting the imagination in motion. Whether for collection or for fun, Hot Wheels have always been in the hearts of many people. Today is the time to rediscover theirs indelible charm in a new videogame key. So, warm up your engines, fasten your seat belts and prepare yourself to this ours review di Hot Wheels Unleashed.

Hot Wheels, what a challenge!

Milestone is the development studio behind the making of Hot Wheels Unleashed. The historic team Spanish is known for giving birth to many racing titles such as the RIDE series, Monster Energy Supercross and MotoGP. The commitment of the development team can be seen above all in the clear and warm tribute, not only to thefictional of the brand, but also to the sense of nostalgia and the high quality of the component racing of the game.

The title, available for all le platforms, Sony, Microsoft and Switch, puts the player in first person at the helm of the classic toy cars Mattel. Unleashed, unlike other Milestone titles, doesn't pretend no simulation on the contrary, it makes arcade and reckless driving its strong point. Let's go and discover together i details of this driving experience, at the same time original and passionate, in this Hot Wheels Unleashed review. 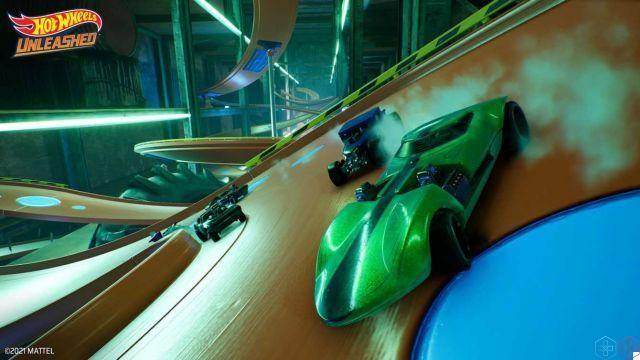 In Hot Wheels Unleashed you can enjoy the beautiful reconstructions of sceneries, tracks e vehicles in two ways. On the one hand, the game in single, on the other the multiplayer. The focus of the title undoubtedly remains the single player, expressed through the new city map called "City Rumble". All races are held in this 2D map distributed in a knot structure. The races are divided into fast race e attack on time. Among these, to move forward and block the next ones, we will have to overcome some boss races.


Unfortunately, despite the name, the latter they do not represent a real variation from normal races, and that's a real shame. Gods have also been added secrets, for a total of 9. The latter are unlocked once certain are completed target (which unfortunately the game does not spell out in the right way and therefore one is obliged to make one sforzo to understand) and give access to others branches map tree, as well as provide new machines and in turn unlocking others additional races. 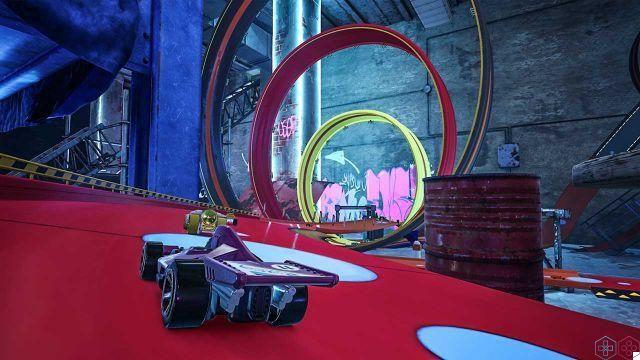 In multiplayer instead you can challenge your friends or other players in matches on the most diverse tracks. From those already present in the game up to the tracks made by community. The progression is undoubtedly linked to the single player. By completing the challenges of the City Rumble you will be rewarded with money e gears.

The former are required to purchase the box surprise and cars from the collection menu, the seconds are for upgradare your vehicles and pick them up by category. In total in the game it is possible to collect about more than 80 toy cars between common, rare, legendary, secret and treasure hunt. Each machine is excellently characterized and reflects the real models by Hot Wheels. 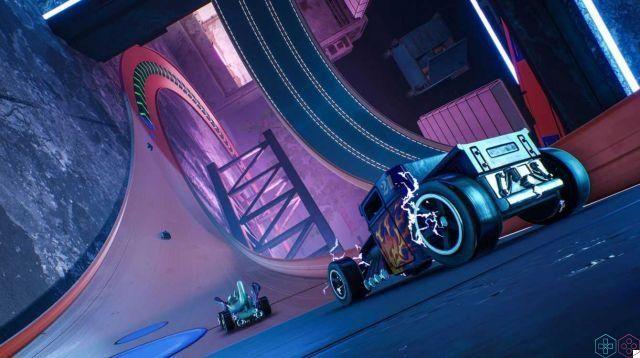 Hot Wheels gameplay unites sensations, mechanical and assets from different stocks. The influence of is particularly felt Mario Kart, both for the design of the circuits and for the smoothness of the vehicles on them. Not only that, mechanics such as the boost (the turbo), and the various malus and obstacles released during competitions. Speaking of these, you will hear often at first balk given the apparent feel of theirs inevitability. For example, cobwebs block the vehicle in place for several seconds wasting precious time. Ditto regarding the tornadoes.


The driving setting arcade of the title is particularly successful. The toy cars all have their own weight that goes to modify them behavior on the track. In various situations one can notice the goodness of the physics of play, both during curve, that especially when you are upside down on top of a loop of death. If you have little power and you don't activate the boost, you seriously risk to fall below due to gravity. Finally, through the analog, you can manage the rotation of the toy car on the various assi during the phases in the air. In short, controlling vehicles requires a minimum of dexterity, but once you have learned it there you will have fun a world. Also thanks to a level of challenge excellently balanced. 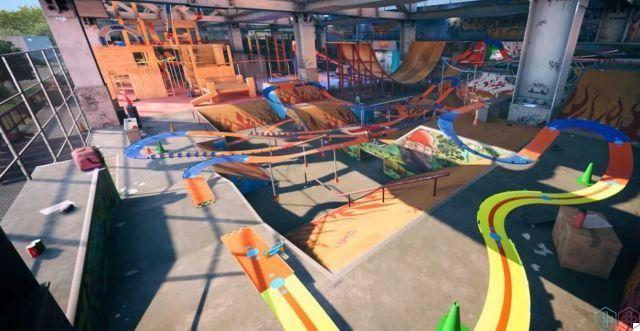 Personalize as hard as I can - Hot Wheels Unleashed review

If you are not satisfied with the colore of your car you can customize it at your leisure. The dedicated menu is quite rich and you can go to change both the color of the various components (frame, wheels, etc.) that the type of matter e travel aesthetics. the liveries can in turn be Saved e shared online. The way to replace liveries in the collection menu with created ones is rather intricate to be honest. Once you have changed the aesthetics of the car you can use it both in single in that multiplayer.

In the game the races will take place on piste, which, like the Hot Wheels tracks real, they are placed within certain environments. We will be able to compete in ours living room at home, as well as in a garage or in one yard under construction. The peculiarity lies in the fact that if we are going to modify ours Taverna in the special menu, or ourshome, we will be able to observe the changes made too in game. This addition remains however inessenzale given the fact that in the race, for obvious reasons, it is concentrated on the circuit and not on what is outside it. 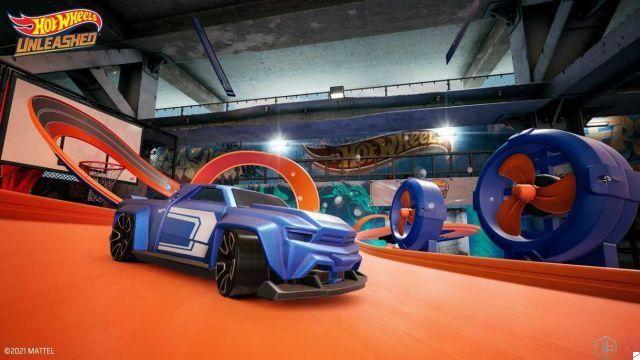 As for the technical / visual side, there is nothing to complain about. If on the one hand the surrender of runway e machines almost mirrors maniacal that of Hot Wheels Really by Mattel, the colors pastel, lighting and excellent definition of the models, contribute optimally toimmersione by the player. From the side frame rate the game performs very well.

We tried the title on For PS4 and it is not found no drop in any particular situation. The experience always remains fluid it's pleasant. Even the feeling of speed it returns quite well, especially once the turbo. To preserve your memories or to immortalize situations epic ed hilarious, the game also features the photo mode. 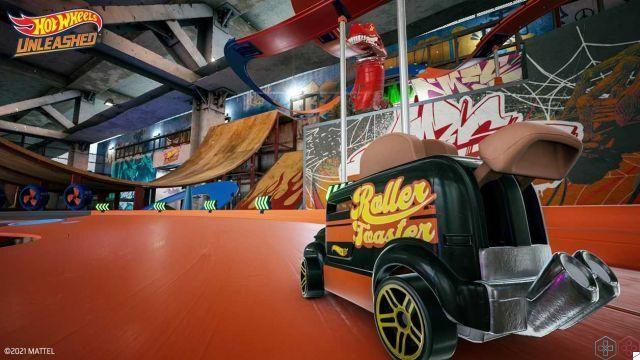 Return to a lost childhood

Concluding this review di Hot Wheels Unleashed, it must be said that the title is all about nostalgia and on the faithful reconstruction of the numerous toy cars available, each one different from the other. From garbage truck to a Audi R8, no matter the vehicle, what matters is to enjoy theexperience. Playing Hot Wheels Unleashed is in some ways alienating.

On the one hand, one has the impression of playing a classic arcade driving game like many others, on the other hand it remains totally fascinated from the change of prospect. In fact, with Unleashed, the player impersonates his own vehicle by becoming itself a Hot Wheels and the world all around suddenly becomes giant, distorted and at the same time far, distant. All of a sudden it's like transported in a bygone era, full of lightheartedness, an era happy.

To buy securities in Discount, go to our Instant Gaming link! For further reviews or insights, follow techigames pages.

House of Ashes review: the third installment of The Dark Pictures Anthology ❯

add a comment of Hot Wheels Unleashed review: the iconic toy cars are back in style