In this review we will analyze the PC version of Horizon: Zero Dawn, which arrived three years after the original release, but unfortunately far from perfect

Let's analyze this review the PC version of Horizon: Zero Dawn, among various defects, but also various merits absolutely not to be underestimated. Being the analysis exclusively of the port, we will not focus on the game itself, which we have already reviewed and which remains in the contents identical to the console version. The only aspect to underline is in fact that the PC version includes all the DLCs released so far. Among them the only true story expansion is Frozen Wilds, which adds a whole new region and approx 9 additional hours of gameplay.

The first entry into the PC market of a Sony exclusive

The arrival on PC of Horizon: Zero Dawn represents a very important turning point for the market, which sees for the first time the production of one internal study from Sony also arrive on other platforms. Death Stranding, also recently landed on PC, is in fact only published da Sony, e il team di Kojima Productions non fa parte dei PlayStation Studios.

The fact that the two titles run on the same graphics engine (the Decima) is certainly one of the reasons why Horizon has arrived on PC, but it is probably not the only one. Towards the end of the generation and three years after the original release, in fact, by now those who had to buy it on PS4 will have already done so, and above all, the PC players conquered by this chapter will then have to buy a PS5 to play the sequel.

An important difference between the two titles is also that the PC version of Death Stranding was in the plans for much longer, with Kojima himself mentioning it as early as 2015. Probably also for this reason, unfortunately, the porting of Aloy's epic is far from the excellence of that of Death Stranding, with several problems that prevent in some cases even getting to the game menu.


From the reviews on Steam it seems that for several players the game crashes at startup, and for others during compilation of shaders. This operation of about 15/20 minutes is theoretically used to improve the performance in the game, and must be performed at the first start or when changing PC components. Fortunately, we did not encounter any crash problems, but Guerrilla said he had already solved the problem for many with a before fix patch. 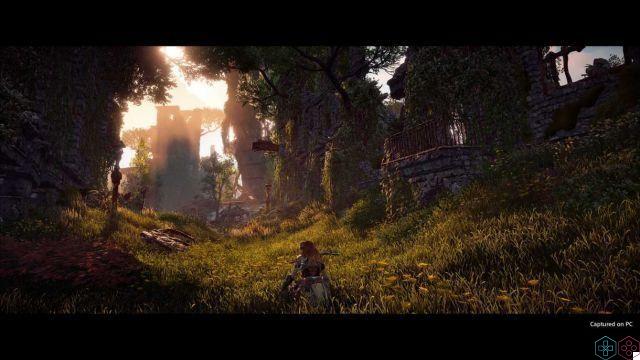 The main advantages at the graphic level of the port are in the support for ultra-wide monitors, and in the possibility of reaching higher resolutions and framerates. Despite the possibly huge power gap, even setting the graphics options to maximum differs from the PS4 versions they are not that obvious. The visible changes, however, are really appreciated, especially in the lighting and in the greater dynamism of the foliage (on consoles it did not always react to the passage of the player).

We are also talking about a game that is already graphically splendid on PS4, which therefore remains a joy for the eyes on PC even without major improvements. More than a negative note, it is therefore a wasted opportunity to make the title shine even more, as we have seen for example with the arrival on PC of Red Dead Redemption 2.

Like many other console-to-PC direct ports, the graphics options are quite limited. The game is therefore not very scalable either for the less powerful configurations, nor as already written for the more powerful ones. At the moment also the option to adjust the anisotropic filter does not work (which visibly improves the quality of the inclined textures with respect to the view, with almost no impact on performance), which must therefore be activated from the control panel of your graphics card. The graphics settings menu, however, has the positive fact that it clearly shows the various differences between the presets of each setting, with an image on the right.


During our tests we found some graphic glitches too many, in the rendering of water from a distance, and above all, in the furs, skin and beards of different characters. This aspect is also already known to Guerrilla, which we hope can solve it with the further patch that should arrive next week. 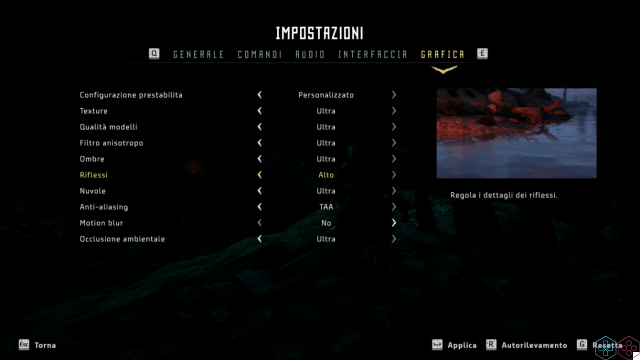 If we have indicated the graphics component as a mere wasted opportunity rather than a real negative, we cannot do the same with performance. In addition to frequent stutter in game and during cutscenes, the overall performance falls short of expectations. Nothing dramatic, but in both configurations we tested the game with, reaching 60 fps was definitely more tiring than it should be, especially when compared again to the excellent port of Death Stranding. As also found by other users, the stutters are still for the most part in precise moments, that is to the changes of framing in the cutscenes, and to the updates of the objectives of the missions on the HUD.

Before we get to the benchmarks per se, other issues relate to adaptive resolution, and the internal framerate limiter. Adaptive resolution results completely useless, dramatically lowering the rendering resolution, and showing us a blurry image that doesn't even fill the entire monitor. The framerate limiter introduces problems with frame pacing (inconsistency of the time passed between one frame and another), which makes the game appear much less fluid. Also in this case it is therefore necessary to use the control panel of the graphics card or other external programs. 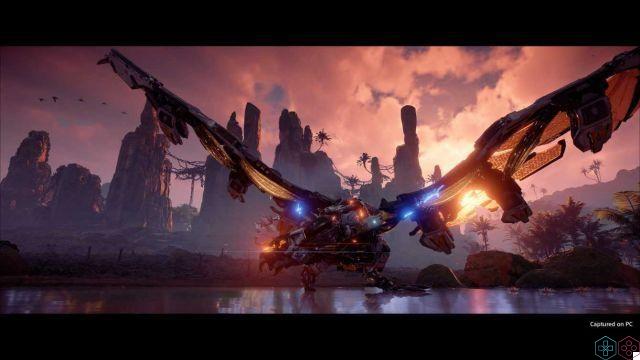 Coming therefore to benchmarks and settings, we tested the game on a desktop PC and a gaming laptop. The desktop PC is equipped with an i5-6600 processor, RTX 2060 video card, and 16 GB of RAM. We ran the benchmark in 1080p at both maximum and original console settings. As can be seen from the images in the first case we have reached an average of 52 fps, while in the second an average of 64 fps.

As already written, these results are not bad but quite disappointing, and the gain in performance from maximum to medium options it is quite low. This is an aspect that probably won't improve much with the first updates, but the absence of the stutters can already make a huge difference in the enjoyment of the title.

The real benefits of this port - Horizon Review: Zero Dawn for PC

Moving on to the merits of this port, the difference is given from the unlocked framerate and from the aim with mouse and keyboard it's just huge. In a game like Horizon where we are constantly aiming with the bow and on the go, hitting the weak spots of the machines with mouse precision and without aim assist is really fun and satisfying.

Given the speed of movements both of Aloy and of the machines the greater fluidity is only icing on the cake. For those who want the game, it obviously supports the use of controllers. Moving on to some problem that will probably be solved shortly, in short, playfully Horizon excels even more on PC. 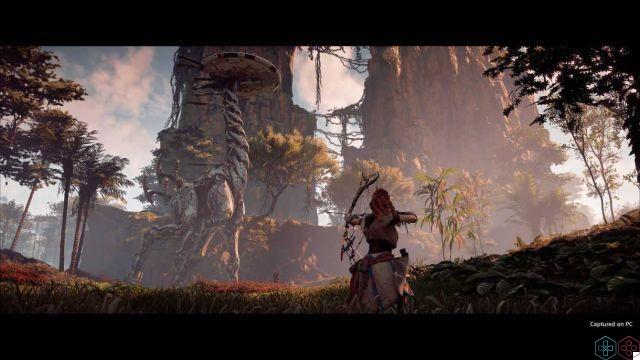 Concluding this review of the PC version of Horizon: Zero Dawn, at present the port is all in all good, but he was released too quickly. In fact, we find it quite senseless to respect the established release date at all costs and then indicate in the release notes that we are aware of problems such as the malfunction of the anisotropic filter, the continuous stutters in the game, crashes in the mandatory compilation of shaders and animations blocked at 30 fps. Unfortunately, despite a first update, most of the problems remain, which should be fixed in a further patch coming next week.

As already written we have focused exclusively on porting, but we cannot forget that there is behind it one of the most popular games of 2017. We therefore absolutely recommend not to miss this experience, but only after waiting for a few more updates.

We remember that Horizon: Zero Dawn per PC is available on Steam and the Epic Games Store from 7 August 2020. For other reviews, news, guides and specials on the gaming world, go to the dedicated section on our site! Remember to also follow us on our Instagram, Facebook and Twitter pages, and on our Youtube and Twitch channels!

7.5 Excellent game, but ported below expectations

add a comment of Horizon Review: Zero Dawn PC, so much unexploded potential!