Why were wargames born? How can they be classified? Are they all really the same? Here is the guide to war board games

Welcome and welcome to the fourth round of our board games guide! Today we talk about the many wargames, almost countless and it would be wasted time to tell which is the best or worst. Of course, Risk! it is the most famous, remade in different versions and imitated over and over again, but I assure you that there are all kinds, with numerous mechanics. Today I will tell about these sub-categories!

Needless to say, table wargames start with chess, an abstract game that, in fact, simulates a battle. Since the Middle Ages, people began to think of games with larger or more complicated chessboards: all these proto-wargames were used by officers to simulate the effects of their strategies, but were still composed of pawns and square chessboards.

In 1780 the German Johann Christian Ludwig Hellwig, educator of officers at the military academy of Braunschweig, published a game with a very simple name: Versuch eines aufs Schachspiel gebauten taktischen Spiels von zwei und mehreren Personen zu spielen or Attempt to build a tactical game on chess that can be played by two or more people. This was a more complicated model of warfare with colored areas representing the different types of terrain. In 1803 different miniatures were inserted indicating the three branches of the army (infantry, cavalry, artillery) which moved a number of different squares. Then the chessboard was drawn on the map of a real terrain: in this way a square identified a real area. This and other subsequent evolutions of the Prussian wargame aroused the interest of the European armies, who wanted to use them for training, especially after the results of the Franco-Prussian War: each developed its own version, and they are still used for simulations.

The writer HG Wells published Little Wars (1913): pacifist, he thought that warmongers could let off steam on his game, in three dimensions, with spring guns that fired bullets. Also noteworthy is the Fletcher Pratt's Naval War Game (1940), a wargame with ship miniatures scattered across the floor.

From the 50s onwards there was a crescendo of the wargame industry: Avalon Hill (absorbed in 1998 by Hasbro) first published Tactics then Tactics II, and Gettysburg, the first wargame based on a real battle. From the 70s here is the explosion of publishing houses such as

If the 70s were the golden age of wargames, they suffered a decline from the 80s: the market was saturated and role-playing games were depopulated, a rib with greater interaction than wargames. From the 90s, with the arrival of personal computers, video-wargames were proposed, which compacted the space necessary for the battle and the computer simulated the opponent.

After reading the history of wargames, we can say that basically you need a map, miniatures and dice. The map can be square grid, hexagonal (each square is a "step"), or the miniatures can move freely (as in Warhammer).

The miniatures can all be identical, or each have peculiarities, such as range or speed.

Dice can be replaced by human intelligence, but many games keep them to leave that element of randomness.

Particularly Stratego is a wargame that sees two players opposing each other on a map 10 × 10 squares, with 40 pawns for each arranged on the back of the opponent. Each pawn has a military rank and can move one step in turn. When two opposing pieces are adjacent, they are revealed: the higher rank eliminates the other. Objective: to reach the opponent's flag piece. 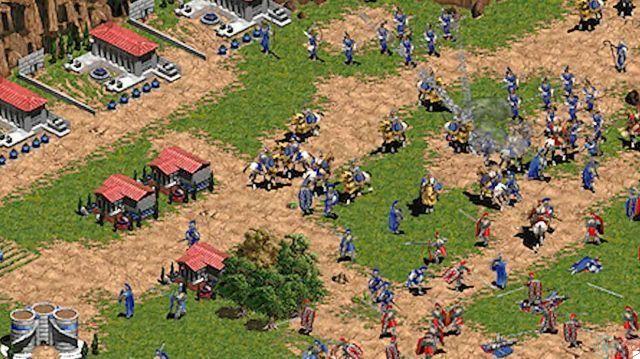 Video-wargames have compactness on their side: it is not necessary to "invade" a room to play, just a PC that manages the opponent's moves and rolls the dice. Of course, human interaction is less, the player only sees a part of the map and a wargame with more complex rules can be created, manageable by the computer but not by the player. A perfect example is Age of Empires (and all sequels) of Ensemble Studios (1995-2009), which simulates battles, skirmishes or missions in various historical eras with a multitude of characters, buildings and troops of various kinds that can evolve and strengthen over the ages. Imagining it physically recreated, it would be impossible to manage, intrusive and with an excessive amount of pieces to use and time needed (other than RisiKo evening!).


With the advent of smartphones and tablets, video wargames have become portable, such as Clash of Clans or Brawl Stars.

Wargame: where, when and who fights

The original wargames are run on a land, sea or air plane, depending on whether they simulate land, sea, air, or a combination of the three battles. Later ones added the space component. Areas can represent a village, a city, a region, a country, a continent or the world, depending on the ladder.

Similarly, wargames can be set in different historical periods, and of these adopt the weapons, areas and tactics: if set in Ancient Rome, the battle will take place in Spain, or in Europe; if during a World War the map expands to the whole globe. Alternatively, simulated battles can be hypothetical (World War III), alternative (steampunk), fantasy (Lord of the Rings) or futuristic (spaceships fighting).

In the battle simulation, single troops can be moved in skirmishes, taking into account wounds and ammunition; individual moving vehicles tactically; you can ask to simulate operations with battalions, taking into account the weather; until you reach a level strategic with great armies colliding.

Nowadays the word wargame is associated with RisiKo! (1968), variant of French Risk (1957) and all his descendants. Few other tabletop wargames have stood the test of time, many have converted to the video version, and are associated with "shooters".

add a comment of Guide to board games: wargames, war simulators