After a certain period of Early Access on Steam we finally have the pleasure to tell you about Grip: Combat Racing. It is a title with an arcade soul, let's find out in this review

Grip, the spiritual successor of Rollcage, is an intriguing title that offers an arcade formula with many new features. There is a lot of work behind this game: Grip has a long history behind it. In any case, the developers have included everything in this title: a campaign, a single player and a multiplayer mode. Not bad at all! Let's find out what it is.

As mentioned, Grip: Combat Racing is a title filled with many modes. Let's examine them individually. The campaign includes 11 levels in which the player has the opportunity to face challenges that have an ever increasing difficulty. In addition, these challenges increase the accumulated experience and therefore the player's level (more on this later). In this way, the player as he progresses in the campaign becomes more and more skilled, and at the end of the same he reaches a decent level of skill in the title. Nothing better for a training that turns out to be more than interesting, and moreover very useful. The campaign is so competitive that it pushes the player to feel even the most varied feelings towards the toughest rivals to face. Also, some things will only be unlocked upon completion of the campaign - one more reason not to miss it. The single player mode is very accurate, it includes 3 macro-categories: racing, arena and carkour. Each of these has secondary modes. In racing mode we have 4 sub modes:

The arena mode instead provides 3 types of clashes. At the moment only deathmatch mode is available, where the players will face each other in a fight for the last piece of "junk". Steal loot and time bomb modes will also be available in the future. Finally, there is space for the carkour mode, which so much resembles the madness of titles like Trackmania. Also in this case it is possible to live a complete experience, with tracks of increasing difficulty to the point of reaching the impossible. But after all, we like challenges. 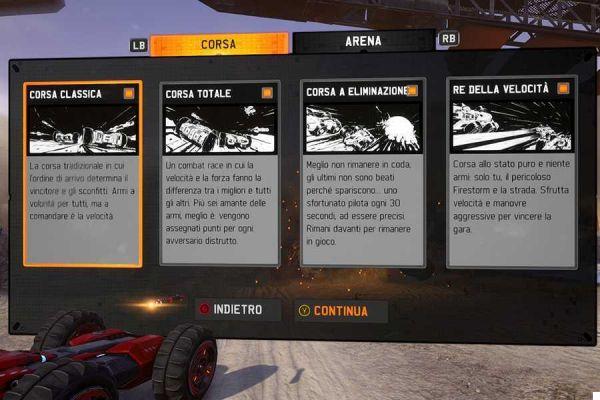 Multiplayer picks up all single player modes with the exception of carkour mode. It also adds the classic split screen mode for local friend races. Nothing is missing and everything works perfectly. The arcade soul of the game is its very center, it will in fact be necessary to learn the tracks in an impeccable way to excel in this title: and this is precisely the heart of the experience. Any mistake, in all game modes, is severely punished. A try and error and a level of difficulty that hasn't been seen for a long time. Game modes totally promoted.

In this title, the developers have left ample room for vehicle customization. Grip: Combat Racing provides customizations that involve every aspect of your vehicle. We start with the bodywork (extremely customizable in terms of color), arriving at things like the type of paint, the stickers, and the tires. In addition, there are several vehicles with different characteristics from each other. Their design is always original and pleasant. The only common feature is the ability of all vehicles to be perfectly tipper. Therefore, even when turning 180 degrees, the vehicle can run smoothly. Intriguing right? All the tracks and arenas have been built on this feature.

And thanks to the peculiarity of the vehicles it was possible, in Grip: Combat Racing, to create tracks and arenas that have unique characteristics in this genre. Each track is a small masterpiece. They are all very punitive, but they can be approached differently, depending on the player's style and how the game evolves. Each arena and track has its own identity and many peculiarities that make it unique. These are set in different planets, each with identifying traits.

Our races will therefore take place in very different scenarios and will be full of acrobatic and difficult traits. All of this, of course, to be tackled at insane speeds. Speed ​​is well represented in the game. After a long session, it will seem to us that the rest of the world is standing still compared to what we have experienced behind the screen. A real success guaranteed by an extremely engaging gaming experience.

Grip is a title that offers a lot. Something unexpected, for those used to such titles, is to see a total and perfect contextualization of every aspect inherent in the game world and beyond. In fact, the race manual tells the story of Grip, “an illegal sport that spreads like the plague”. Let's find out why races take place in certain places, why our vehicle is armed, we have before us the history of vehicles and opponents, and much more. The care we have noticed is a sign of the developers' love for this title. And also towards those who decide to trust them. 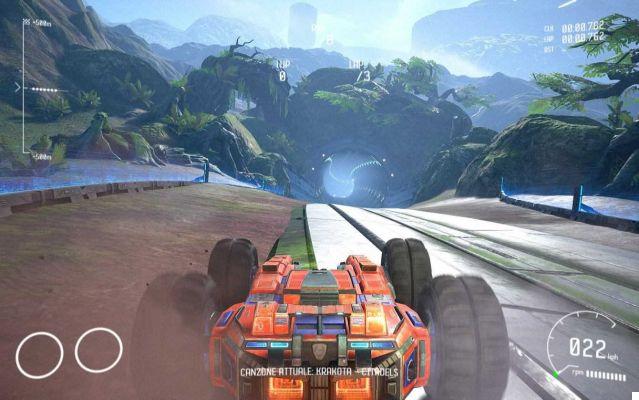 Grip: Combat Race, a title to have | Review

We didn't want to tell you too much so as not to ruin the gaming experience of this fantastic title. We were truly amazed by the care of every aspect. Technically the game is flawless, the collisions are well taken care of and there are no bugs whatsoever - which is truly remarkable. From a gameplay point of view, the title has no weaknesses. It's all about learning and taking the time to appreciate its infinite nuances. But the maximum of the experience you will have it only in one way: by deepening all that is Grip and its game universe. The care of the developers is surprising, there is no aspect of the title that does not have its own justification also from a narrative point of view. This is a title that should not be lost at all, we probably have the best arcade racing game of this generation before us. Nothing is missing. Make it yours, you will not regret it.

add a comment of Grip Review: Combat Racing, when racing is life