Goryo preview and 7 - The Sins: Saturday 12 October in the comic shop

They are among the most anticipated board games of the year and, finally, this Saturday we will have the chance to try them. Goryo and 7 The Sins will in fact have a national preview in many comic shops and specialized stores, ready to be played and loved

We have been waiting for them with curiosity, and now GateonGames has decided to give us the opportunity to try them in preview. On the afternoon of Saturday 12 October, a large number of national comics will provide Goryo and 7 The Sins in preview for those who will go to the store to play them. The launch event is one of the most interesting and ambitious we have seen and we are confident that it will attract significant participation. But let's see in detail which games are the protagonists and which comics adhering to.

Goryo and 7 The Sins: the Previews

Goryo is an investigation game for 2 players, which pits them against each other in a tight challenge of technique and talent. In fact, one of the two plays the role of Goryo, a vengeful spirit who was once the beautiful favorite of the Shogun; his mission is to take revenge on his ex-lover by awakening in the rooms of Edo Castle and breaking every object in front of him. The other player will have to defend the Castle by impersonating the Shogun's faithful Samurai, who will be forced to anticipate the moves of the Spirit to prevent him from destroying the entire palace.

It is a challenge of ingenuity and turn-based planning, born from an idea by Andrea Candiani and produced by GateonGames. Duration approximately 30 minutes, suitable for all ages.

7 The Sins is a card game for 2 to 5 players, created to test the memory and moral integrity of the participants. Based on the 7 deadly sins, it pushes players to make choices and sacrifices to meet the requirements of the Last Judgment. But the fearsome Abyss of the Soul looms over destiny and can overturn an entire life of balanced decisions. It is a game of ingenuity and above all of memory, because during the game you will not be able to consult the previous moves, and you will have to rely only on your own memories.


Born from an idea of ​​David Spada and produced by GateonGames, it has an average duration of 20 minutes and is suitable for ages 14 and up.


The stores participating in the initiative

Below, the official list released by Dungeondice.it. All that remains is to find the nearest store and book to try Goryo Preview and 7 The Sins! 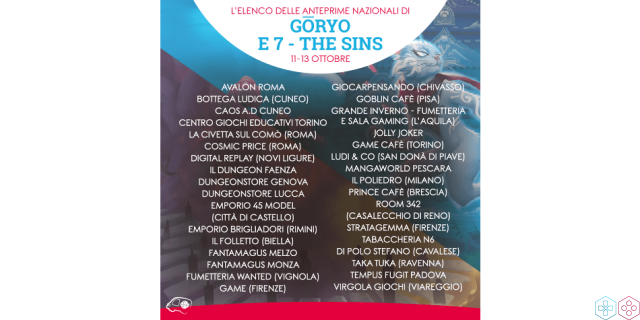 add a comment of Goryo preview and 7 - The Sins: Saturday 12 October in the comic shop