GOLAZO! Review: football has never been so strange

We finally got to get our hands on GOLAZO !, the arcade soccer game by Purple Tree, probably the strangest that the gaming market has ever seen, here is our review

Against any market trend, GOLAZO! it features arcade graphics (complete with a retro filter), quick and easy gameplay and game modes unlike any other soccer game. Between fools from behind, special shots and super-speed, the first hours of play have flown away and we are here to tell you about it, in this new review!

GOLAZO !, the soccer game from Purple Tree, an independent software house, is finally available for PS4 e Nintendo Switch. Taking the pad in hand and starting the game, we were very skeptical about it, but the experience turned out to be lighter and more fun than we thought. We are immediately greeted by a loading screen that briefly announces the graphic style of the game.

At the first start, after the brief loading of the menu, we are in game tutorial, where the few commands of the game are explained quickly. In GOLAZO !, in fact, it is only possible to sprint, pass, shoot, feint at normal speed and feint running with the sprint. In the defensive phase, it is possible to tackle in a slide, “push” and block. But we will talk about this later.

After the tutorial, we will find ourselves in the main menu, from which it is possible to select the game mode among 3 choices: Quick Match (Quick Match), World Cup (World Cup) e International Ranking (International Ranking), a mode in which the player will have to win more than other teams to stay at the top of the ranking. The fourth section of the menu is the Locker (locker), and allows you to access a section where we can buy in-game items through the credits that accumulate while playing. Between celebrations, masks for our players to wear (yeah), 90s jerseys, balls and shoes, we find ourselves spending the first 10 minutes to spend credits initials that the game gives us.


The last section of the menu changes the game options, and from there it is also possible to activate a cute one arcade filter cabinet style, and the whole becomes very very similar to Virtua Striker. Ready to play our first game, let's choose the Quick Match mode, choose the team and let's go on an adventure. And what an adventure! 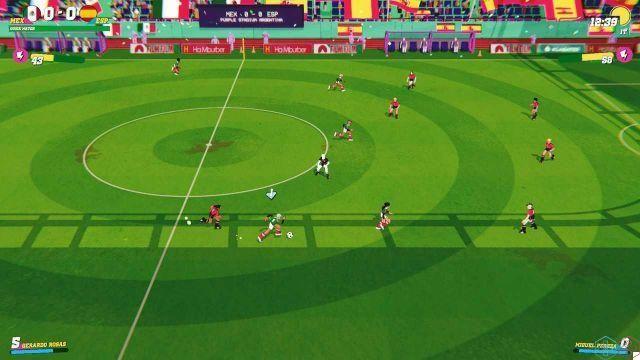 What the hell is going on? - GOLAZO Review!

Already in the choice of the team we notice a couple of peculiar details of the game. The first is that the game is made up of only national teams, divided by continent and do not have licenses for any of the teams, as we suspected. Discounted, but sorry a little. This means that, by choosing Italy, we will find ourselves playing with players like Ciro Ferrari or Paolo Malditini. Ah, the Italy coach, for some strange reason, is Armando Miradoni. Of course!

The second detail concerns training: in GOLAZO! you play in 7 against 7, and it is possible to choose the module to be adopted among only 4 choices. Once the team, the uniform and the module have been chosen, we are ready to play. The game graphics are the classic "low poly" graphics of the 90s, in perfect old school cabinet style. Here it must be said that the aesthetic choice was a lot apt as well as cared for in details. The layout is typical of soccer games, with stopwatch, score and a particular bar under the name of the players, which will fill up during the match.


As the game progresses, let's understand how the game works: there are no fouls, the push button allows us to literally push the opponent with the ball, e there is no offside. The only fouls that the referee will whistle (apparently without criteria) are those in the penalty area. The penalties are very simple, in full line with the game; you can choose left or right, and both the shooter and the goalkeeper have a single shot, power and save animation.

Between fools from behind, shoves and shots from midfield, we understand what the bar is used for, which slowly fills up during the game. By doing certain actions during the game, such as dribbling or long shots, it is possible to charge it, and once it is full it will give us some power up. Basically, it is possible to have 3 different power ups: the special shots, almost impossible for goalkeepers to parry, the super-speed, and the super-tackle, a much longer and more effective slide than the standard one.

Raise it to the sky, captain! - GOLAZO Review!

After the first game, to recover from the first impact, we go back to the shop to buy the Italy kit of '94 and a pair of stylish sunglasses to better face the world championship. After that we start the "World Cup" mode. Basically, this mode allows you to relive the emotions of World Cup. Once the team has been chosen, we will face the typical World Championship scoreboard, to try to climb to the top of the world. Unfortunately, we do not make it through the group with Belgium, Switzerland and Brazil, due to some dubious episodes and a couple of feats of the opponents. Sin.

The last modality instead, called "International Ranking", is a typical one arcade mode. Having chosen the team, the uniform and the accessories, we will have to face all the other teams in the game, trying to win the most games in order to stay in first place. world ranking. During this mode, as well as in the World Cup, the weather is random and will change from game to game. You will be amazed how often it snows in this game. With each victory, we will continue to get credits to buy additional items from the in-game shop.

This, in addition to the glory, is the only "reward" feature introduced in the game to make players feel satisfied. We would have liked to have something more, but remaining in the retro perspective and in the conception of what the game is, we don't feel like complaining that much. Climbing the world rankings 3 minutes at a time, the first two hours of play passed between laughter, highly unlikely goals and missed penalties left and right. 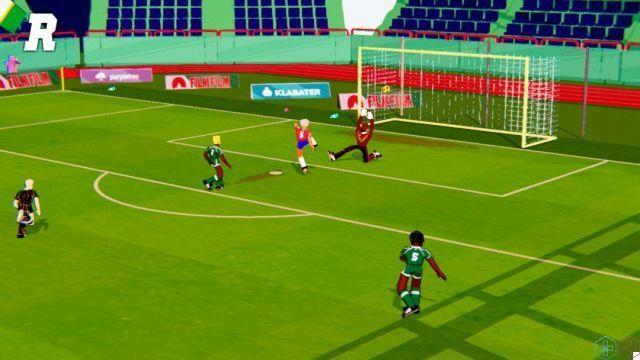 Yes, but then what? - GOLAZO Review!

This is precisely the problem of GOLAZO !. After playing a few hours, winning the world championship and climbing the ranking, what can we do? The answer, unfortunately, is one: nothing else. Once you've completed the modes, you don't feel energized enough to keep playing. The multiplayer party factor entertains, but not much: it is possible to have up to 4 players locally, but the monotony dictated by the few commands and the absence of a "tactical" factor, lead players to turn off the console after a while. The absence of an online component then, it hurts, especially considering the type of game.

Added to this is the gameplay question: the absence of fouls and offsides, and the presence of power-ups, make the game decidedly rhythmic and frenetic, but which tires quickly. The commentary is reduced to the bone, limiting itself to announcing only the power-ups and shots, and we note too much the cold "fiction" of the digital commentator. The absence of "complexity" during the games means that the game quickly leaves the time it finds. The only way to have a "challenge" is to increase the game difficulty, but once you have learned the opponents' patterns, winning becomes easy again. Furthermore, the animations are few and not too accurate. The players always move in the same way, the tackles are always the same and the goalkeepers have only 2 animations for the parades (one high and one low), in addition to that of the back pass.

Football is all about fun and team play. It doesn't matter if you're playing on a field or at home with your friends in front of the TV. With its not-too-serious vintage twist and a creative, modern take on classic gameplay, GOLAZO! it is certainly the perfect game for people who are tired of soccer management or absurd and difficult simulators! Just grab your controller, sit on the couch and hit "play"!

Unfortunately we would like it to be so, but the question is It's not that easy. Although the "hippie" spirit of Klabater applied to this type of games is interesting and certainly innovative, does not justify the scarcity of game content. We understand that a soccer game doesn't have that much to show or tell, but we would have liked this lack of content to be compensated for by richer gameplay or other modes. a little more different among them.

The defects are small but many, as well as the shortcomings. As already mentioned the few animations of the players, the monotony of the games, the poor reward system and the modes too similar to each other, get tired very soon. The multiplayer component leaves the time it finds and also the party factor tired after a few games. We reiterate that the absence of an online multiplayer mode regrets, and not a little. The impression one gets, with a cold head, is that the development team didn't want to risk too much. The fact that it is an indie development team, unfortunately, fails to be an excuse, and once the console is turned off it is only regret for a wasted opportunity. 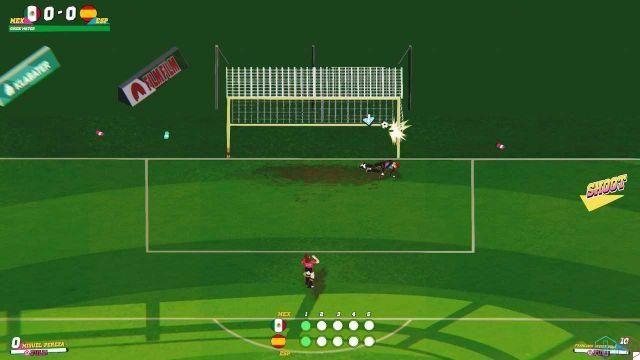 The popular old school style, the arcade setting of the power-ups and the cute contents of the shop are the only winning aspect of the game, but they do not justify the price. Despite GOLAZO! can prove to be a light and fun alternative to more complex football games, as well as a way to pass the time on the road in its Nintendo Switch version, we advise you to spend your money elsewhere.

In conclusion, if you are an avid football fan and you like to organize light party evenings with friends, maybe you might like GOLAZO! in its simplicity. Otherwise, if your budget is limited and you are looking for something more than an occasional fallback to spend a few hours every now and then, we advise you to turn to some other title.

For other news on the world of video games, reviews, guides and much more, we invite you to stay tuned to techigames.

add a comment of GOLAZO! Review: football has never been so strange