Free games: here are the titles of February 2021 for each platform 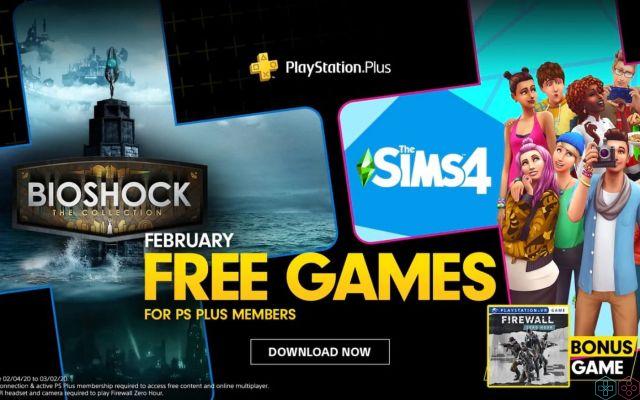 With all these free video games however there is always a risk of not being able to redeem someone in time. For this reason we have decided to write this article, in which we will tell you about the many free games offered in February by the various monthly subscription services and more.

Many of the games we will talk about in this article will be free throughout February, but others will only during a certain period. For this reason, we recommend that you redeem the titles that interest you as soon as possible, so as to avoid unpleasant situations.

PlayStation Plus - The free games of February 2021

As always, we start our list with the PlayStation Plus, the subscription service of Sony. As you know by now, the PlayStation Plus offers many advantages, such as the ability to play online on PS4 / PS5 and to load saves in the cloud, but it also allows you to redeem three free titles per month. Here are the free games available in February with the service:

This time, too, Sony has spared no effort, offering all subscribers some really good products. Certainly the title that stands out most is AllStars Destruction, Lucid Games' new multiplayer racing title exclusive to PS5, but be careful not to underestimate the other games.

Concrete Genie is a very interesting indie in which you will play the role of a young boy able to bring his drawings to life thanks to a magic brush, while the Ultimate Edition of Control will allow you to relive one of the most popular games of 2019 in a completely new guise thanks to the inclusion of all DLCs and the addition of new ones exclusive features for PlayStation 5.

Now touch all’Xbox Live Gold, the counterpart Microsoft of the PlayStation Plus. The free games we are going to tell you about are part of the program Games with Gold and are updated on a monthly basis. Be careful though, because some of these titles will be available only for some platforms and during specific periods. Here is the list of Games with Gold flanked by the platform and the period in which they will be available:

Compared to past months, Xbox Live Gold is offering gamers in February many noteworthy titles. If you are a fan of Gears of War for sure you will be happy to be able to get your hands on Gears 5, The Coalition's latest TPS, while if you prefer old school horror games, then Capcom's remake of the first Resident Evil will not disappoint you. In addition, you can also have fun with many excellent titles from the past, such as the hilarious Lost Planet 2 or Indiana Jones and the Emperor's Tomb, one of the most popular games of the first Xbox.

We still stay at Microsoft to talk dell’Xbox Game Pass. At the moment the stock of titles of the service is very large and, on a monthly basis, is enriched with new games. Usually several quality titles arrive every month and again the company did not disappoint us at all. Here is the list of new free games added to the service in February alongside the platform and the period in which they will be available:

February seems to be the perfect time for all users who make the most of the opportunity play in the cloud on mobile devices. This month, in fact, owners of Android devices will be able to enjoy great titles such as Monster Hunter World e Wolfenstein: Youngblood. Obviously, however, the owners of PCs and consoles in the meantime will not remain dry-mouthed, since they will have the opportunity to play many excellent titles such as The Falconeer, Final Fantasy XII e Jurassic World Evolution.

Let's now move on to cloud gaming with the PlayStation Now, the streaming gaming service created by Sony. At the moment the PlayStation Now boasts a very large stock portfolio and every month is always enriched with so much new. Also, most of the games available for PS4 they can also be downloaded, thus offering the possibility to play them even to those who do not have an excellent connection. Here is the list of free games added to the service in February:

Obviously the games that stand out the most are Detroit: Become Human e Call of Duty: Black Ops III, but this time on PlayStation Now they are really available products for all tastes. Whether you are a lover of FPS, Diablo hack and slash, fighting games, horror or fiction-focused titles, this month you will certainly not be disappointed with Sony's service offering.

Let's talk now about Stadia, the Google streaming gaming platform. Although a subscription is not required to use Stadia, with the pro subscription you will have additional benefits, including many new titles every month. The new free games available in February are:

lately the quality of the titles offered by Google is increasing a lot and February is the proof. In fact, this month subscribers will be able to get their hands on excellent titles such as Journey to the Savage Planet, the latest and most fun game from Typhoon Studios, Lara Croft and the Guardian of Light, a great Tomb Raider spinoff coop, and Enter The Gungeon, one of the best roguelite ever made.

Now let's see what titles are offered to us this month by the service Humble Choice by Humble Bundle. Subscribers to this service have the option to redeem every month, depending on the type of subscription, 3 or 9 games. In addition, as usual you will also have access to a huge one collection of DRM-free titles that you can download and play forever. Here are the free games available in February:

Also on this month's list there are many quality games to choose from, but the ones that we think stand out the most are Outward, Endless Space 2, Valfaris e Lovecraft Untold Stories. Plus, if you are looking for some title from play with your friends, we suggest you also take a look at Moving Out e Trine 4.

Finally, we conclude our article as usual with the titles of Twitch Prime, Amazon's subscription service. Usually the platform always offers a lot of free games and even in February we were not disappointed with the quantity. Here are the Giochi 8 available for free with this month's subscription:

For this February Twitch offers to all its subscribers several very nice titles. Specifically some of the best on the list are Little big workshop, a pretty good management system, Monster prom, a fun multiplayer dating sim, and spin, a 2D platformer that is really beautiful to look at.

Thanks to this article you now know where to easily find most of the free games available in February. Our guide ends here, but if you're interested in really getting all the free games of the month, don't forget check out the Epic Games Store every Thursday. Fortunately, you can stay up to date on all the titles offered by this store thanks to the many dedicated articles on our site.

If you are interested in staying up to date with all the news on the world of video games and much more, then keep following us here on techigames.

Free games: here are the titles of January 2021 for each platform ❯

add a comment of Free games: here are the titles of February 2021 for each platform