In the Forbidden City review, find out how to become the best advisor to the young emperor Wei Zu Yang

After being in Japan with Tajuto, Reiner Knizia this time takes us to China inside the Forbidden City in the presence of the young Emperor Wei Zu Yang. Our task is to play the part of one of the Emperor's advisors and become the most influential of all within the imperial palace.

Inside the box we find the following components: 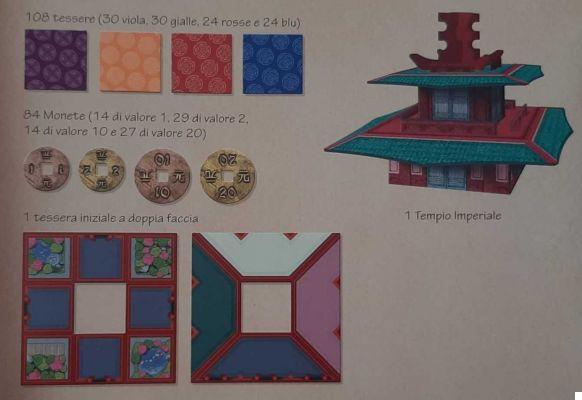 The goal of the game is to become the most influential adviser within the Forbidden City, to do this you have to occupy as many rooms as possible getting the most Coins and to increase your power even more you have to have as many dragons on your side. possible imperials.

For the setup, first of all you need to place the double-sided tile in the center of the table, choose the side that has the gardens on the corners if you are a beginner, otherwise if you are already an expert you can use the other side with which you start the game with larger starting rooms and you have a chance to earn more Coins. Then, after assembling the Imperial Temple, place it in the center of the double-sided tile. Create a common supply with Coins and put them within everyone's reach. As for the colored tiles, each player takes the pile of their color and discards the following number of cards in the following cases:

Once the tiles have been assigned, each player must draw the card that is on top of his pile and must hold it in his hand without showing it to the opponents. On the tiles you will find depicted walls and rooms in white, pink and green or walls with doors. On some of them you can find depicted 1 or 2 Counselors of the color of your cards or 1 Imperial Dragon.

How to play | Forbidden City Review

Starting with the first player and proceeding clockwise, all players must place the tile in their hand face up in the following ways:

Once this tile has been placed, you draw another from your pile and you always keep it in your hand without showing it and you pass the turn to the next player.

Closure and value of the rooms

To earn Coins it is necessary to close the rooms and a room can be considered closed when it is completely surrounded by walls with or without doors. As soon as you place the card that closes a room, you have to calculate its value as follows:

To the previously calculated points must be added those of the rooms adjacent to the closed ones, which are connected through the door. The value is calculated as follows:

Unfortunately, it is a game that personally does not give me enthusiasm from all pores, both for the playability and for the materials. While Tajuto pleasantly surprised me, Forbidden City does it but in a negative way. From the point of view of playability it is a classic game of placing tiles in which a bit of strategy must be applied, nothing so new and exciting. As for the material, I find the tiles quite fine and not well finished and the risk is that they wear out after a few games even if you pay close attention not to damage them, moreover the Imperial Cardboard Temple after the plastic Tajuto is a small "Fall of style". I would avoid too much inequality of experience in strategy games between players, that is, I would avoid games between newbies and too skilled strategists because the game could be too boring and not very competitive. It is certainly a board game suitable for all ages. It is a title that is fine to add to an evening in which you intend to play other things as well, but not to be the protagonist, for that I just give it a 6 and a half. 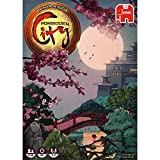 Review Escape from the Asylum: 10 hours of escape room ❯