Flip Wars review, the party game that Nintendo Switch was waiting for?

Flip Wars arrives on Nintendo Switch with the intention of enriching the number of party games present on the new hybrid of the Kyoto House. Developed by a small Japanese team with a limited number of resources, it is a real indie game that takes its cue from the good that numerous other exponents of the genre with similar mechanics have to offer: first of all the famous Bomberman

Offered at an overall low price, Flip Wars and already able to offer multiplayer games for up to 4 people, 2 of which locally thanks to Removable Joy Cons (to participate in the games in the company of 3 other friends it will be necessary to buy an extra pair of Joy Cons), Flip Wars does not hide its nature as a "miniature videogame" but this does not mean that it deserves to be relegated to the second category without saving first. what good it has to offer.

Revolving cards, and it's immediately a party

Flip Wars is a party game and its essence is extremely simple, although the application of the rules requires a certain amount of concentration and also allows the accomplishment of studied strategies. The title involves 1 to 4 players colliding in an arena, the floor of which is made up of white tiles. Each little man-character will feature a particular color (yellow, red, blue and green). Well, in addition to running madly here and there, our heroes will be able to perform a crash on the ground (a real spanking) thus turning the tiles (hence the name "Flip" Wars, probably) and coloring them in the own main key.

The winner is the one who colors more tiles than the set time, or alternatively the one who knocks more rivals from the arena before the time runs out. Because yes, by performing a crash on the ground we will not only paint the white tiles, but if close enough to our rivals we can make them fly away from the game area, so as to make them waste precious time to color the area of ​​interest. Of course, you can throw them away whether the purpose of the game is to color everything, or whether it consists in carrying out more "kills" than the others: but only in the second case will it be fundamental. In the first, you can also ignore all the participants and color as much as possible. But they will probably make you desist from pacifism. 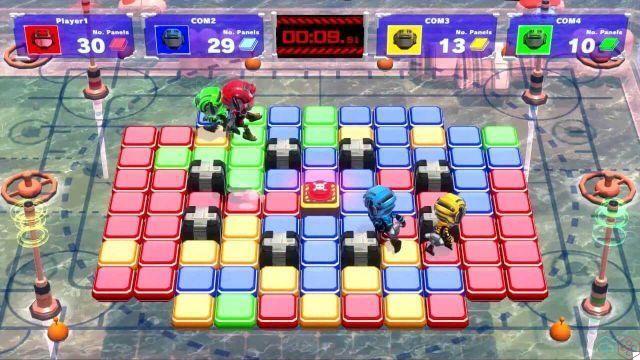 To enrich the mechanics, which would otherwise be too flat, come the design of the arenas and the upgrades released randomly during the fights. We must keep an eye, at the same time, not only opponents ready to throw you away (damn!) but also any obstacles of the surrounding environment; moreover, from time to time, colored tokens will appear to collect, which will provide you with bonuses (or malus) depending on the color. You can run much faster than usual, but also be slowed down for about ten seconds. And then, what about a momentary "immortality", thanks to which rushing to punish all the other players before the end of its effect?

Flip Wars: Fun… short as it is

Flip Wars is an independent production extremely minimalist. The game modes are very few, and all focused on local and online multiplayer. Not bad: after all, the aim of the game is just to have fun with friends. Too bad that many features are currently locked and need a future update. Now, 10 euros for a similar title are spent all in all willingly, but wouldn't it be appropriate to warn the user BEFORE the purchase that it is nothing more than an early access?


It does not play much in the firm's favor to let the buyer discover for himself that only a couple of all planned modes are currently available. As for us, we would have gladly spent double the amount for a complete game, and maybe with some more features. For example, that of being able to invite your friends to an online party, perhaps using the chat features coming to Nintendo Switch.

From the point of view technical Flip Wars does not excel in anything, but offers a pleasant and colorful glance (without excess and without glitz) both in portable mode and with Nintendo Switch inserted inside the dock. Bad for the acoustic tracks, soon to be forgotten and mere outline of a production that did not care more than necessary the acoustic sector of its title. But, in short, let's be honest, who is it that has time to listen to the music, in the throes of frenzied tiles to color?

add a comment of Flip Wars review, the party game that Nintendo Switch was waiting for?