Final Fantasy XIV is far from dead. The Stormblood expansion takes Square Enix's MMO with subscription back on its feet

It is never easy to pick up a game after leaving it there on a shelf to collect dust. Above all it is not easy to take back a MMO chock full of English cutscenes (although the knowledge is high don't tell me it doesn't become a burden after a while). But with the advent of Stormblood and his news I could not miss the opportunity to take my boxer back in hand and throw punches as if there was no tomorrow. So I log in, choose my character and wait to cross the threshold of his world again.

Let's start, but where?

With the new expansion there are things to do, and how! We could run to Ul'dah and unlock i two new Jobs, or we could go to craft the new recipes to the Auction House. But if you want a long and grueling route that will take you to fly into new areas, then you can head to Gyr Abania.

All of this becomes secondary when the goal is to level. Going from level 60 to 70 doesn't seem difficult. There are already many players who find themselves at 68/69. This is also because we will end up with quests (in the final part) that give an average of 120.000 experience points. Also FATE they have been upgraded to be able to level and make them in party is the best way to face them and grab excellent EXP points.

However, that it is a great opportunity is clear from the "files" for login. In fact, the launch was not the best. THE Server & Hosting some duties have been out of service for quite a while. THE data center they seem, then, to be full which brings us back to one of the main problems of FFXIV. Square Enix will you ever update these servers? Oh yes, because despite the game being a monthly subscription it is still the most requested MMO ever.

The most important part of this expansion are the two new Jobs. No doubt about it, Square Enix got it right. It is true that novelty always attracts, but the numerousness of Samurai e Red Mage born in these days is impressive. Getting them is not difficult at all. We know that both need the level 50. The only difference is that for the Samurai we had to put in less effort (and it was even less fun). For the Red Mage it was different. The quest was divided into several steps, with its own storyline all his.

Starting at level 50 is not a problem. As we have already said, leveling is not difficult. The modality too Frontline (72 player PVP) now from exp. It must be said, however, that if you don't play with friends and you are DPS you will have to get used (for the moment) to very long lines. While if you are Healer o Tank you can think of yourself as divinities who will be required everywhere. 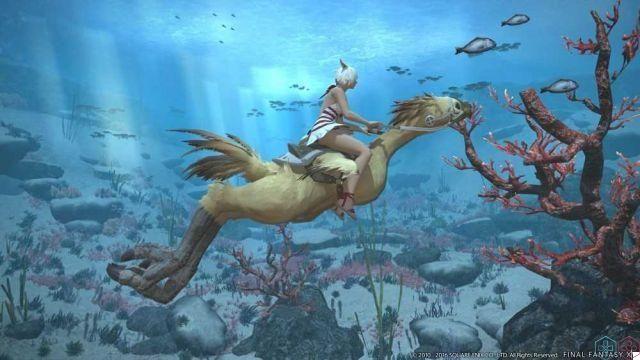 Final Fantasy XIV: Stormblood, a new adventure to be savored

In Stormblood the quality of the main scenario seems to have improved compared to the already optimal management of the game itself. We will follow Lyse (that is, the one who in the past we knew as Yda, a name she has now abandoned due to her past) and the other members of the Scion towards the arduous mission of freeing Ala Mhigo from the rule of the Garlean empire. The problem, however, is represented by Zenos yae Galvus, next heir to the throne of Garlean, one of the most cruel and ruthless villains we have ever had to face in the game. Without risking to spoil the plot I can tell you we will be forced to leave towards Home, the eastern continent from which Yugiri and Gosetsu come.


Doma draws the JapanIt is no coincidence that Kugane, a port city in the Hingashi region, was rebuilt based on the country's Edo-period Nagasaki. In fact, Kugane is so beautiful that you will find pleasure in exploring it even without a real reason, especially because unlike the other main cities of Final Fantasy XIV, this one is completely distributed on a single game area. And it doesn't mean that once the experience with the new expansion is over, our idea changes.

One of the many new features of the expansion is underwater exploration. I'm not out of balance! There are pros and cons. Among the former, of course, the possibility of exploring cities and dungeons underwater is incredible. The downside is perhaps the slightly too blurry view which can be slightly annoying.