Among us is the PC version of Final Fantasy XII The Zodiac Age, about seven months after its release on PlayStation 4: find out in our review how this umpteenth final fantasy behaves

Conspiracy, usurpation, betrayal, revenge and redemption: these are the exact words to describe Final Fantasy XII The Zodiac Age in the PC version, available starting February 1, 2018, or about 7 months after the release of the version for the Sony console (you can find our review at this address). Are you ready to rediscover a vast continent and free Dalmasca from the clutches of the empire of Arcadia?

To replace the legendary Spira di Final Fantasy X e Final Fantasy X-2 that all longtime fans have loved is there Ivalice, continent became the scene of battle between the empire of Rosary and the empire of Arcadia; dividing these two empires are the kingdom of Nabradia and the kingdom of Dalmasca. In the year 704 in Rabanastre, the capital of Dalmasca, the wedding of Princess Ashelia (Princess of Dalmasca) and Prince Rasler (Prince of Nabradia) is celebrated: the ceremony essentially stipulates a union between the two kingdoms. The empire of Arcadia, taking advantage of the situation, decides to launch a powerful attack against Nabradia managing to break through the defenses and arrive at the fortress of Nalbina, a place that delimits the border between Nabradia and Dalmasca. 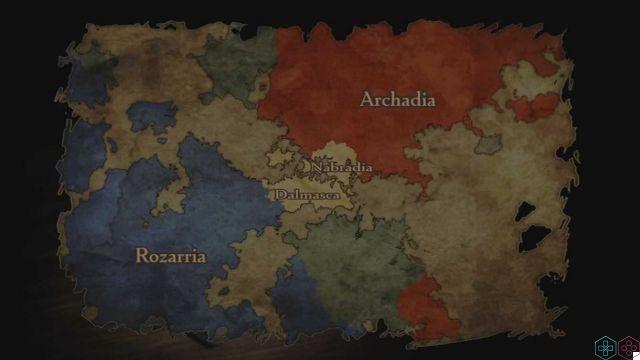 Conspiracy and betrayal ... but a new hope!

Rasler and Captain Basch, Dalmasca's faithful soldier, they decide to resist and protect the fortress, but the powerful army of the Empire still managed to occupy the fortress and exterminate numerous soldiers including the prince himself. With the army in jeopardy and the enemies at the gates of the kingdom, the king is forced to reach the occupied fortress and sign the "peace" treaty while the few surviving soldiers, together with Captain Basch, try to break through the imperials and reach their ruler.


It is precisely here that we will begin to have the first approaches with a different combat system than the other Final Fantasy. In this phase of the story we will take our first steps and touch the new game features that Square Enix has offered us thanks to small tutorials, which will take us to the terrible reality that awaits us: the king, even before the negotiations, he was assassinated by the faithful Captain Basch.

His alleged betrayal only worsens Dalmasca's situation. With the death of her husband and father, Princess Ashelia abandons the throne and the kingdom, definitively marking the end of the royal dynasty and the birth of a new government led by the emperor's eldest son. Vayne Solidor.

Two years after the war, everything seems to have returned to normal and prosperity; business in Rabanastre is going great and it seems that the war, for a good part of the citizens, has never broken out. But, our neighborhood thief does not think so and decides to take back from the Empire what is owned by the people. In one of his exploits he will find himself in front of a treasure that goes far beyond money: the Magilite of the Goddess. A long journey will begin for Vaan and his future companions that will give new hope to those who have long coveted freedom and independence. 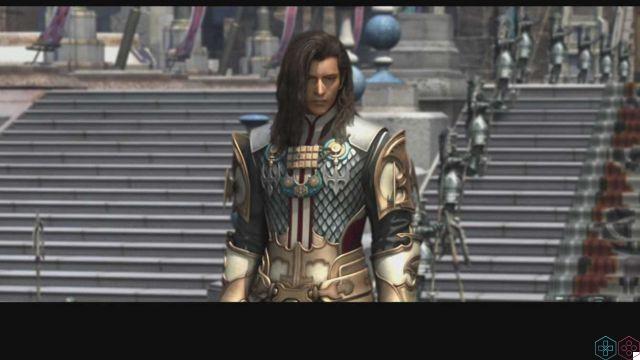 An improved combat system that deserves a second chance!

If until Final Fantasy X-2 Square Enix has maintained more or less the same style of play, improving only a few details, in 2006, with the release of the original Final Fantasy XII, the Japanese software house decided to adopt a new and revolutionary combat system by completely eliminating random fights.


This time there will be no transitions between the exploration phase and the battle phase: each character will be free to attack an enemy or avoid it. When we enter into a fight with an enemy, a "line" will appear indicating the targeted target (blue if it is the aim of our character or ally, red in the case of our opponent). The attack or spell will not be instant, but it will need a "charge time" before being launched and will be indicated by a bar that gradually fills and drains after each single hit: a classic ATB system, therefore, inserted in an open map. 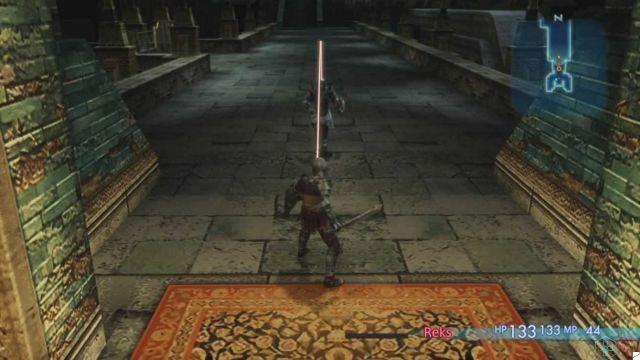 Gambit: privilege or a new kind of tactic?

We will therefore be able to decide, character by character, every single action to be performed in battle, but with this chapter Square Enix has pulled a new tool out of the hat: the Gambit.

The Gambit system is a very interesting solution that gives the player a greater chance to implement tactical plans to get rid of enemies. The system allows you to enter, through a special menu, a series of instructions so that, if a certain condition occurs during the battle, the character can automatically execute the predefined command. 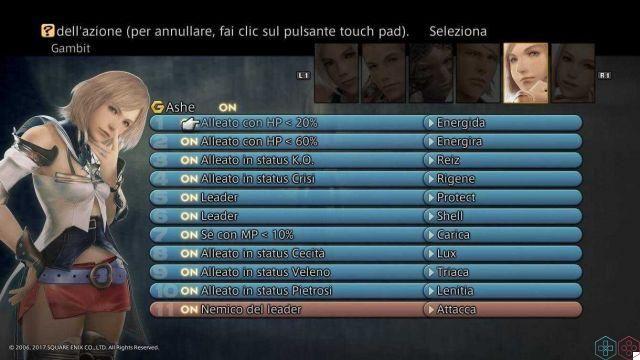 Show me the License!

In the original PS2 version (and the only one that came from in the West) the player, as soon as he came into possession of a weapon, equipment, magic or technique, had the obligation to unlock the License request by spending their own LP (points obtained following a battle, different from EXP). The licenses were, in practice, squares of a chessboard: the latter was identical for all the characters.

The "problem" was that this type of development did not allow every character to specialize in a certain area. Fortunately, Square Enix changed the system to a later version. This remastered is based on this version: the western player will now have the possibility to choose between 12 types of chessboards (between Red Warrior, White Wizard, Hunter, Samurai, Black Wizard etc.). Each character will be able to specialize in a class and, subsequently, choose a second one.

Speaking of the graphics sector, the leap forward has been there and it can be said that Square Enix has done a decent job with Final Fantasy XII The Zodiac Age: of course, the details of some secondary characters and some models have not had the retouch that there has been in the most important characters. For the PC version we tested for this review, we can say that there is no real difference between the Windows version and Sony's flagship version; the framerate it can reach a maximum level of 60 fps which, however, sometimes tends to have some annoying jumps that persist even in high-beam PCs. On the other hand, the work done for the sound sector is excellent, with music completely retouched as in the previous remastered.

The game obviously offers x2 and x4 modes: that is, it is possible to speed up the game up to four times the standard speed. Furthermore, in this PC version, it is possible to select the "New Game Plus" mode (a simplified version of the game) and "New Game Minus" from the first start: the latter is basically a "hardcore" mode that prevents the accumulation of EXP. 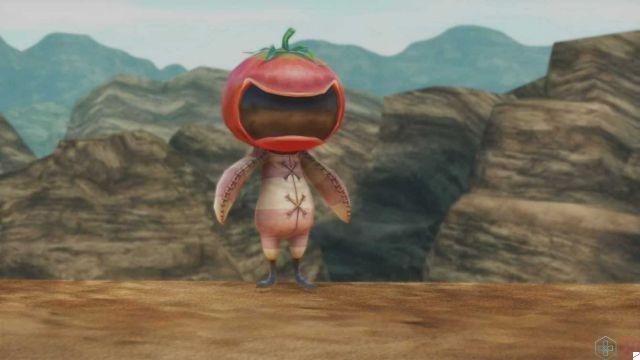 Conclusions on the PC version of Final Fantasy XII: The Zodiac Age

I would say that this remastered has given excellent results. However, I believe that the list price, which is around € 49,99, does not justify the improvements that Square Enix wanted to "give us" with this remastered. This title however, with the arrival also on Steam, has a second chance to enter the hearts of the fans; who 10/11 years ago had already tried to do so by proposing a different style of play than usual, but maintaining the same spirit that characterized his older brothers. If you are interested in the game but are new to the world of Ivalice, read our guide (without spoilers, of course) for newbies to Final Fantasy XII: The Zodiac Age.