Today we are talking about Explosive Potions, a game by Horrible Games that was localized in Spain thanks to Ghenos Games and which won the 2016 Game of the Year award. The aim of the game is to accumulate more points than other players by creating more Explosive Potions. possible. Now, take your notebooks, pen and inkwell because Professor Albus Ludente is about to start one of his lessons and you have to pay close attention if you want to pass your final year exams at the Horribilium Academy of Witchcraft. 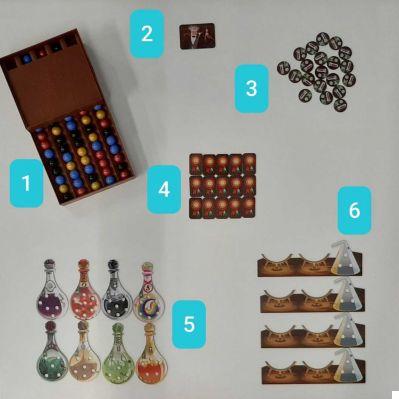 The ingredients to create our potions are 4, they are few but essential. In the game they are represented by marbles: blue for Unicorn's Tears, red for Dragon's Smoke, green for Ogre's Mucus and yellow for Fairy Dandruff. These four ingredients, when mixed together, give life to Explosive Potions! Let's find out specifically their effects:

All Potions do not trigger Explosions. 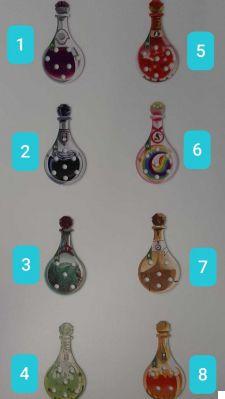 First of all, each player must be given his Banco board on which the Potions and ingredients will be placed in the appropriate Stock section. Then you take the number of Skill tokens based on the number of players:

Finally, 6 categories of Potions are chosen, the other two are placed in the box. From these 6 categories you have to take two Potions for each player with the star symbol and you have to place them in the center of the table with the part of the recipe face up (the one with the colored lines). Proceeding clockwise all the players choose a potion and then going back, counterclockwise, the second potion must be taken and these must be placed in the Mixing area always with the recipe visible. Once everyone has two potions, the others mix and divide into 5 piles with the recipe side up. Then insert all the marbles into the Dispenser until the 5 lanes are completely filled and create a common reserve with the Help signals. At this point you can choose who will be the first player and you are ready to start the game! NB For the first few games, it is advisable to exclude the Sticky Balm and Childhood Filter potions.

How to play | Explosive Potions Review

During his turn, the mandatory action is to take an ingredient from the Dispenser. This could trigger one or more explosions, this happens when marbles of the same color collide with each other. If this happens, then the player must also take the marbles that have collided with each other. In addition to this, however, other optional actions can also be done:


The ingredients collected with one or more of the actions mentioned above can be placed on the Potions (following the positioning rules) or you can choose three of them to put aside in the Supply.

The turn ends when you have taken all possible actions during your turn. At this point, if you have any leftover marbles, that is, that cannot be placed on the Potions and that do not fit in the Stocking section, put them back in the Dispenser tank. If you have completed one or both Potions you must draw more from the 5 piles in the center of the table (where you always have two Potions). Finally, you earn a Skill token in these two cases: if you have completed 5 potions of five different categories or 3 potions of the same category. No you receive another Skill token in cases where you complete 6 Potions of the same type or make another set of 5 different Potions. Skill tokens damage +4 points in the final point count.

La end of the game triggers in two ways:

In both cases you finish the round, until you return to the first player. When everyone has finished their last turn, you can proceed with the counting points, adding the points of Potion tiles (those marked in the gray ribbon to the left of the Potion) and the points of the Skill tokens, if they have any, e subtracting the points Help token, in case they have been used. Vince the player with the highest score, while in the case of draw the players involved must draw a marble each trying to trigger as many explosions as possible and in this case the winner is the one who has taken the most marbles.

This is a game I didn't love right away, it took me a long time to rate it positively. I like the fact that in this second edition there is the plastic Dispenser, certainly more resistant than the cardboard one, but I would also have appreciated an improvement of the Potion cards that in some places wear out practically immediately, despite being careful in handling them. Explosive Potions requires a good deal of strategy, especially thanks to the various combinations that can be done with the Potions, which makes each game different from the others. It is a very family friendly game.

add a comment of Explosive Potions Review: all taught by Albus Ludente