Evergate review: the afterlife of the old-school platformer

Among the last hot sighs of this strange summer we had the opportunity to take a trip to the afterlife, all platforms and very fragile crystals, of Evergate and here we are with the relative review. Read on if you want to find out what you get by adding the trial and error formula to the platform essence

Il August 18th arrived on the Nintendo eShop, Evergate. The title has a fairly ambitious goal. Restart from premises (frankly formidable) of Ori and the Will of the Wisps and try to show something original. Ambitious no doubt indeed. In our opinion the title of Stone Lantern Games LLC he succeeded, in some way, in the enterprise. We explain the because in the next lines of this review on evergate.

Un warning preliminary before proceeding: if you have been touched by the title of Moon Studios and have thought about it evergate just because you hope to find again so much part of that game in this other, alt! As you will see shortly, evergate has some points in common with the reference model: both are platform and both, for one reason or another, are somehow "fairytale". Still, the two differ (and not a little) in everything else.

An indie that makes it

Let us now mention the past recent of evergate. The story that we summarize here briefly is that of a indie who can do it. It was January 16th of last year when on Kickstarter the first project of Stone Lantern Games, a small independent developer from Boston. The Develop the game has already started 3 years ago and in the last 12 months, on Kickstarter, Supporters 718 saw potential in those short gameplay clips that showed, on YouTube and Kickstarter, a hybrid a halfway between platformer and puzzle game. In short, Evergate was able to surprise. Reason why the Stone Lantern project has garnered more than 33 thousand dollars of donations.


Those first fleeting videos shared on the aforementioned platforms were united by a common denominator: difficulty to the limit of the prohibitive. It is possible, therefore, that this was what made the palates greedy, greedy for challenge, of the lenders. The fact is that by now the game has already made the leap on the springboard up Switch and get ready to do the same on PC (Steam), PS4 and Xbox One from September XNUMXst. 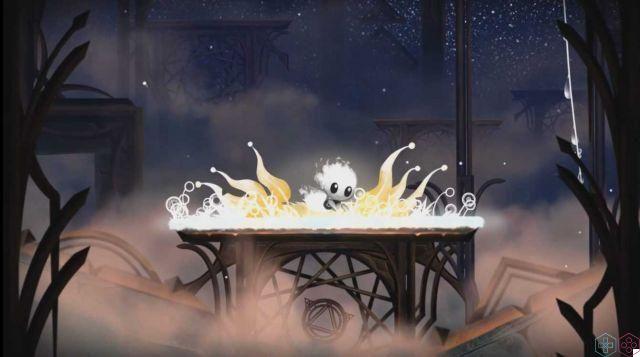 Once upon a time there was a spirit - Evergate Review

Continuing now with the review, we will briefly reconstruct theincipits of the story told in Evergate. La narrative premise of the title starts in thebeyond. Ki, aka your character, is un'anima of the underworld. At the beginning of the story the Mietitrice welcomes the little protagonist into the new reality, a kind of limbo between life and another (yes that's right, it is reincarnation) and accompanies him towards theEvergate, a portal capable of projecting souls towards the next life cycle.

So here is what happens the first of the series mysteries that you will reveal during this videogame experience: instead of reincarnating, Ki is forced to relive the memories of some deceased who lived in aremote time. To know the cause of that bizarre you just have to play. No turns of words: the writers of Stone Lantern have written a plot that runs properly. The system of memories it works, fascinates and excites. One never falls into the cloyingness of the already seen or the banal, the story of Ki must be lived in one breath. 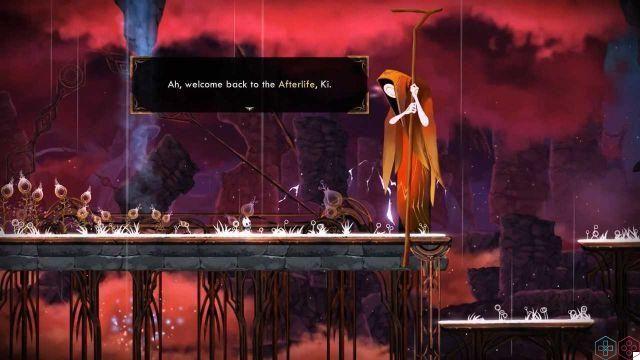 My soul, return to your platform - Evergate Review

You can still do something about it original in one genus, the platform, in which over the years it has already been done perhaps everything? Well, probably yes. Evergate gameplay revolves around one multifaceted mechanics and difficult to master with a bland appearance: the Soulflame. It is a radius able to pulverize almost everything. Well, how do you reach the platforms higher than the various levels of play (the "memories") that you will face? With the Soulflame, obvious.

We quickly illustrate the dynamics: Ki, while jumping from platform to platform can release the aforementioned radius. In the middle of each jump, if he Soulflame is triggered will trigger it accordingly slow-motion. In this temporal juncture you will have the opportunity to aim and fire (with "Y") to some crystals and plaques semi-invisible. The first ones shattering will generate ashock wave which will come back to you allowing you to reach previously inaccessible locations. The latter, in some specific conditions, will materialize platforms where you fired. Cumbersome, real? A little, but don't worry, you will get carried away soon. The gross it will come as you try to master this technique.

It has been said that under the genre platform you can still do something about it original. Evergate proves it in simple terms setting of each level. Starting each scenario you will find yourself in front of a background and many platforms, crystals and semi-invisible plates suspended in the void. In many cases, especially in the second part of the title, the eye will have a hard time ideally reconstruct the path to take since in those same cases the elements they will seem placed at random. Yet everything has a sense. To reach the finish line, all you have to do is the good old man trial and error: you try and try again until you go mechanics).


Evergate therefore proposes a curious mixture of platform e puzzle game, skills and mind; because yes, to complete some levels you will have to puzzling and in that lies the nice (or the gross, it depends on your tastes). 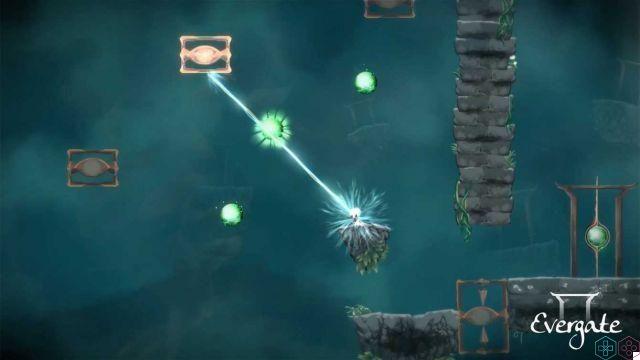 The Darksouls of Platformers - Evergate Review

As mentioned, the gameplay It's difficult. Then there are also other problems like murderous swallows, leveled with thorns and demonic ravens. Yes, Evergate is a game difficult, but really difficult, one of those where the controller it risks being launched as an interplanetary probe at any moment.

It may happen then, that after having sweated seven shirts and more, you find yourself facing the area finish line. At this point, for a simple one oversight, you find yourself pressing "X"(Who is responsible for respawn) instead of"Y". Here is the disaster. Ki will magically position itself at the beginning of the level. Just then, your poor Joy-Con will begin to travel in interplanetary orbit, it is inevitable.

In this his sadistic appearance evergate does nothing but bring to mind old memories (or nightmares) that only i platform old-school they were able to give. Whether you want to call it Dark Souls to platforms or the new Cuphead it does the same, evergate it's a real challenge that hardcore gaming lovers will probably appreciate. The difficulty increases so gradual, progressive and inexorable and Evergate could give you addiction in less than no time.

Sometimes though, it has to be said, some of the levels really felt like challenging excessively. Positive notes also in terms of longevity. The title will provide you with dozens and dozens of levels-puzzles. Plus, considering also that solving them will be a challenge to put on your resume, the title will keep you busy for quite a number of hours. 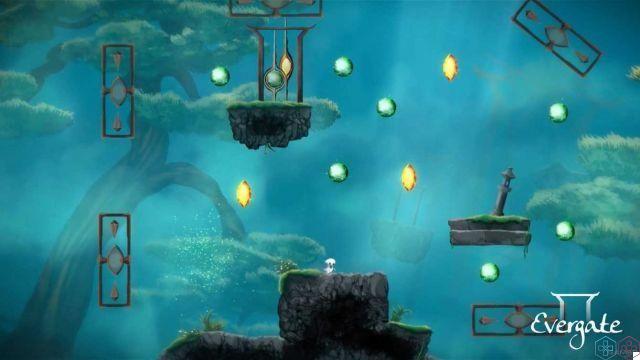 Sweet on the bottom – Evergate Review

We arrived, in our review, to considerations of nature technique ed evergate, in this case it has two souls, it is appropriate to say. On the visual plane the title of Stone Lantern fatally shows his indie nature. The glance it is not the best. Far from the visual magic of Ori, the title appears graphically off, flat and serial: platforms show up in sections replicated one the same as the other. The same are also made in 2D graphics so not very successful. The backgrounds and images of the weave are more inspired and evocative.

A completely different storyaudio. Real orchestrated pieces, symphonies, choirs, arpeggios, virtuosities. We are talking about something very comparable, and probably superior, to what has been seen in many titles triple A, without fear of daring unlikely comparisons.

Finally, nothing to say about optimization, no frame drop to report. On the Nintendo hybrid the experience is fluid and respawning will be a pleasure (or almost). The advice, however, is to avoid playing in portable mode. The various levels appear excessively minute and Ki it's almost a invisible dot on the screen of your Switch and you will feel like real moles right away. 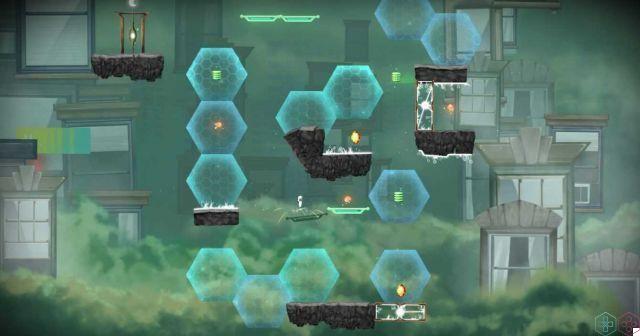 A gauntlet from beyond the grave

And here we are at the end of this journey into the afterlife. Ki's path is long, difficult, exciting. We have tried to explain why evergate it seemed like a title original and rather different from Ori and the Will of the Wisps, its clear model of reference. The heart of the experience of Moon Studios was thescouting and evergate proposes, as mentioned, a mix of puzzle and platforming in a progression it does not have nothing linear.

The experience touches peaks of difficulty at times punitive true old school, a little too much perhaps. It will be up to you to decide whether to accept the gauntlet launched by Stone Lantern Games. The game splint in its component graphics, but then resumes with a 'musical performance from standing ovation with both hands.

For the reasons we have listed above, it goes without saying that the title is recommended to one narrow niche, probably very small. If you are looking for one real challenge, you are lovers of indie and you want to see if i platform they still can surprisevi, give it a chance. You will not be disappointed.

Thank you for taking the time to read this review. Stay tuned to techigames for all the news and curiosities from the world of gaming and beyond.

add a comment of Evergate review: the afterlife of the old-school platformer