Elastium review: we travel through time

Would you like to be able to command space and time to be able to travel to unknown worlds in search of fantastic treasures? Thanks to Elastium you can do it and to learn how to use it you have to read this review

You have abandoned the severy time to travel through time why is building a DeLorean too complicated? Don't beat yourself up! Thanks to the two game designers Oren Shainin and Yaniv Kahan and their Elastium, everything is now easier.

But what is theelastic and what is it for? Elastium is a rare rubbery substance that allows its user to control both space and time at will. This gives the opportunity to embark on a journey in search of remote and unexplored worlds, which hide fantastic treasures and precious objects.

The objective of the game is to collect as many treasures as possible, taking possession of the sectors of the board and completing the missions that are assigned.

In addition to the base game, you can play with 8 different scenarios which we will talk about in an article dedicated entirely to them. 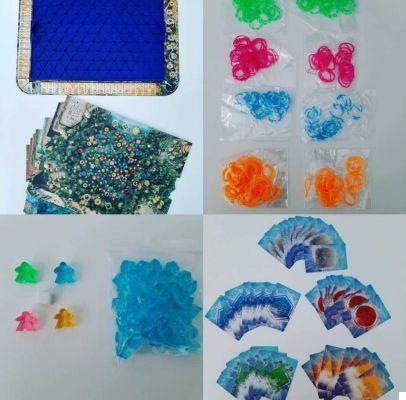 This game has very original and innovative components, let's go to list them: 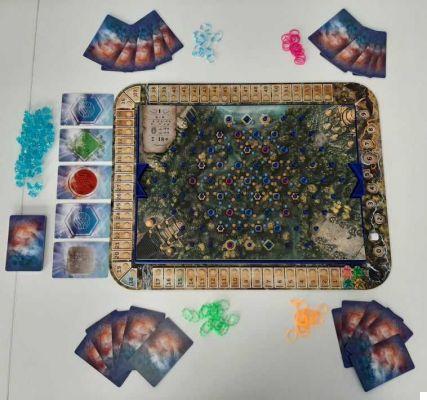 First of all we must place the blue playing base in the center of the table and we must put around him, frame type, the scorecard / round counter.

We then continue with the choice of the board and place it on the game base, all the pins must be inserted into the holes. Important! The game is made up of various scenarios and each of them requires the use of a specific board based on the number of players, so be careful to use the right one.

Every player choose a color and takes the elastic and meeple correspondents.

Then yes position all the meeple on box "0" of the scoreboard. In case in the scenario we have chosen there is a fixed number of rounds, then we must place the counter-round token in box "1" of the counter-round course. At the end of each round, the marker must be advanced one space.

We mix oral carte and give them to the players like this:

We also put 5 cards face up next to the game board, these are the visible resources. We're going to place the draw deck face down next to you.

What are the cards for? They are used to transform natural resources into Elastium that can be used to explore various worlds and collect treasures.

Always close to the game board we will also place ours energy crystals.

NB. The preparation may vary according to the various game scenarios, in which case you must follow the specific instructions of each scenario.

Finally, in the top left corner of each board there is a table with symbols which summarizes some essential points to be able to play the game. 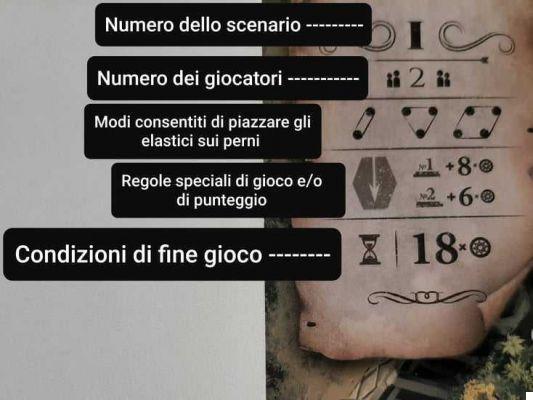 How the match unfolds | Elastium Review

In this article we are going to explain the basic rules of the game. Each scenario may have other special rules that you find explained in the dedicated section in the instruction booklet.

To start, we need to decide who will be the first player and to stay on the subject start the most flexible person.

In every turn we have the opportunity to perform two actions among those that we are going to illustrate. You can do the same action twice or do one of each type by choosing which one to do first, but let's see them specifically:

The second action, that is place a rubber band, can be done in two ways:

The first rubber band of the game always connects by starting with a starting pin that is surrounded by a yellow halo, starting on the side of the board closest to you.

The next rubber bands must start from one of the pins you have already connected.

In order to connect a pin I have to discard a card of the corresponding color. The discard can take place in three ways:

It is possible to do an additional action once per shift spending three energy crystals, the choice of this action is between drawing two cards or placing a rubber band. Used crystals are placed in the common supply.

End of the game | Elastium Review

Each scenario has its own end-of-game and final scoring conditions.

The following are the general rules:

What I think of Elastium

It is certainly one of the titles that most struck me about the latest news from dV Giochi for two reasons, the variety of games that can be played thanks to the eight different game scenarios and for the very special components.

Regarding the components, however, I am concerned about the use of rubber bands and the easy wear of these pieces.

add a comment of Elastium review: we travel through time