Here we are back with the second and last part of the detailed guide to the eight scenarios of Elastium. Are you ready to delve into the last four worlds and finally start your adventure?

For those who have lost them, before reading this article I invite you to read both the review of the basic rules of Elastium and, of course, the first part of the guide to the eight game scenarios of Elastium.

Let's not get lost in chatter and let's go immediately to deepen the last four worlds.

You have come to the ruins of ancient buildings and monuments at an important archaeological site. You must delimit the area to be able to carry on the excavations and to make more money.

Additional preparation: you have to use the scoreboard n ° 5 if you are 2,3 or 4 players.

Additional rules: each player must start with a rubber band connected to one of the pins with the halo along the nearest side.

In this scenario there is a new way to connect the pins which is called barrier. To build it you have to connect with a rubber band 3 pins consecutively, always respecting the lines of the board and discarding the cards for each pin that connects. The barrier can be curve o straight.

The purpose is to enclose the archaeological sites, that is, sectors of the board that have an extension of at least 4 triangular spaces completely surrounded by rubber bands of the same color.

The archaeological site gives the owner of the additional victory points which are equal to the number of triangular spaces of which it is formed (each triangular space of the site is worth 1 extra point).

The explored sectors are not part of the archaeological sites. The owner of the site earns neither victory points nor energy crystals for sectors that have already been explored by other players before the site was enclosed.

End of the game and scoring: the game ends with the sixth round e vince who has more points.

You are in the middle of the ocean, only water around you, but on the seabed you can glimpse numerous shipwrecks. Dive to look for the many treasures that are scattered everywhere, be very careful as some have been covered by the sand swept by the currents.

Additional preparation: you have to use the scoreboard n ° 6 if you are 2,3, or 4 players.

THU there are no cards available face up. All the cards are shuffled and 12 are given to each player who will make up the individual peach bunch, the cards that are left are put away because they are not needed. The first player draws four cards from his pile, the second player draws 5, and so on.

Additional rules: in this scenario each player can start from the pivot he wants, the important thing is that he has the right cards to discard. Any sector of the board can be explored at any time.

Lo purpose is to explore more isolated sectors, that is, those parts of the board explored by a single player and which do not have pins shared with other sectors. The isolated sector can be formed by a triangular space or by several spaces. Each of these sectors is worth 4 additional victory points at the end of the game.

During your turn you can perform these actions, if you can do two in any order or combination:

End of the game and scoring: the game ends when a player reaches or exceeds 15 victory points. The last round ends and then we proceed with the final scoring. Every isolated sector vale 4 additional victory points, regardless of its size.

In the photo you can see an example of the end of the game. The player with the pink rubber bands was able to explore only two isolated areas and thus earns 8 additional victory points. 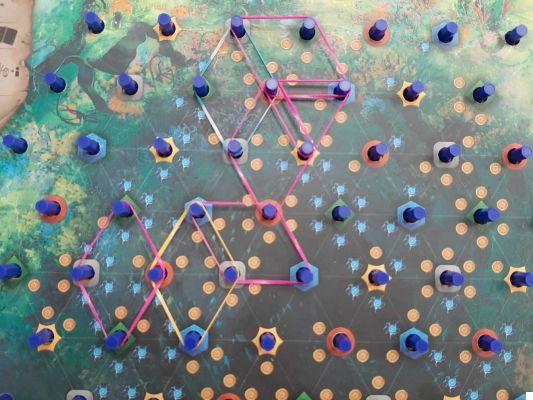 The natives of the place worship two deities who have been represented with two types of totems. You have to be faithful to both gods and you have to show them respect. Respect can be shown to them by exploring the totems individually, while loyalty is shown by controlling as many totems as possible of each deity. By proving to be a follower of one of the gods, you will receive generous rewards from the natives. Instead, by satisfying both gods, you will no longer need to desire anything else in life!

Additional preparation: you have to use the scoreboard n ° 7 if you are 2,3, or 4 players.

Additional rules: as usual, each player starts by connecting a rubber band to one of the pins with the halo along the side of the board next to him.

In this board we are shown two types of totem poles.

It is not allowed explore with a single elastic a space that has the totem and one without.

It is allowed explore the totems on your own, enclose them either alone or with other different types of spaces.

End of the game and scoring: the game ends when a player reaches or exceeds 18 victory points. The final round is played to the end. Players who control totem poles of both types earn 6 additional victory points. If he has control the same number of totems are multiple players, then they divide the points by rounding up.

You have ended up in a very intricate maze. Inside there are objects of great value scattered here and there. Explore this place trying to collect as many artifact sets as you can. But you have to be very careful not to cross the path of your own Elastium, because it could be that it backfires!

Additional preparation: you have to use the scoreboard n ° 8 if you are 2,3, or 4 players. Each player will have only 18 rubber bands of their color.

Additional rules: as usual, we start with the players who connect with an elastic one of the pins with the halo along the side of the closest board. The treasures are placed along the lines connecting the pins.

The aim is to collect as many objects and sets of artifacts as possible, without crossing your own path. They can be connected with a rubber band only two adjacent pins and each new elastic that you are going to place must be connected to the "end" of the elastic chain that gradually forms.

Can not be done never start a new path starting from the tail or from the middle of the chain of rubber bands that is going to be formed.

Crossing another player's chain, you must hand him the card as usual. If, on the other hand, you cross your own chain, for 5 victory points each time it happens (or you lose all of them if you have less).

If you gain an artifact during your turn, then you must draw a bonus card.

End of the game and scoring: the game ends when a player runs out of all the rubber bands he has at his disposal and, as always, the final round is played to the end.

In the photo, surrounded by the rubber bands, you can see the three types of artifacts: sword, shield and helmet. 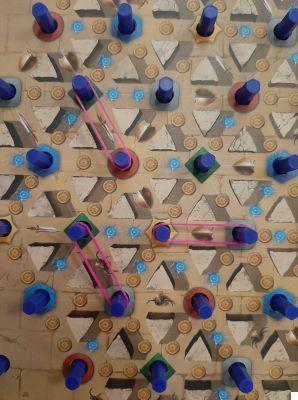 With this article our journey into the world of Elastium ended. We talked about the basic rules, we explored the eight game scenarios and now I leave you to a game played by Il Puzzillo del Sud, so you can learn better how to control space and time in order to start your fantastic adventure!

ONE: Collaboration with Nike and NBA MVP Giannis arrives! ❯