One game and eight different ways to play it. With this guide we go to deepen all the game scenarios of Elastium.

For those who missed it, I recommend recovering the reading of the Elastium review, article in which the game and its basic rules are illustrated. In case you have already read it, then you can proceed with this guide.

The eight game scenarios change based on the number of players. They have preparation and rules that add to the standard ones and the end of the game and the score are different for each of them. 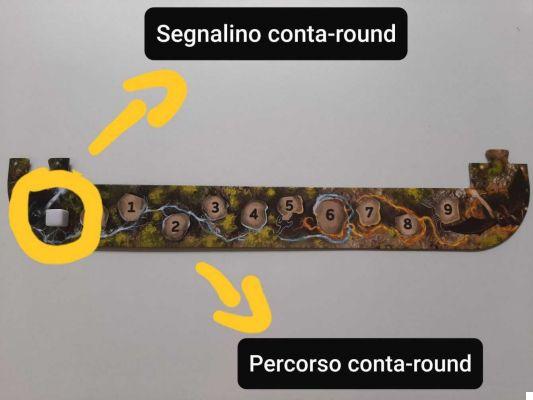 In this first part of the guide we are going to talk of the first 4 scenarios.

Scenario n ° 1 - THE TEMPLES OF THE JUNGLE

Thanks to the Elastium you find yourself catapulted to the edge of a lush jungle that reminds you of tropical Asia as a climate. You decide to venture into the heart of the forest in search of abandoned temples and hidden treasures. Go out of your way to be the first to cross the jungle for the speed bonus.

Additional preparation: you have to use the scoreboard n ° 1 if you are 2,3, or 4 players.

Additional rules: the players all start by connecting with a rubber band one of the pins with the halo along the side of the board that is closest, each player starts from a different side.

In this scenario the aim is to accumulate as many treasures as possible and join the side of the board from which we started with the opposite side.

As you can see from the photo, the blue player has reached the other side of the board and earns immediately 8 victory points. 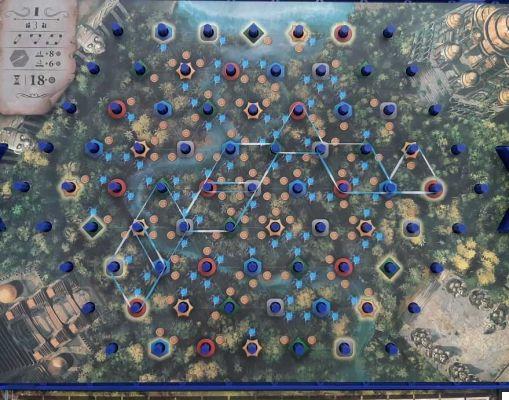 End of the game and scoring: whoever reaches or exceeds i 18 victory points. The final round is played to the end.

You are on top of a volcano that is about to erupt and at the foot of the mountain you see ancient buildings, probably abandoned by their owners in a hurry for fear of lava. You have little time to recover some precious historical artifacts, hurry up!

Additional preparation: use the scoreboard n ° 2 if you are 2,3 or 4 players.

This scenario is played in 6 round, then you have to place the round counter marker on space n ° 1 of the rounds and you have to advance it to the beginning of a new game round.

Additional rules: players need to start connecting one of the pins with the halo near the crater of the volcano.

In the photo an example of a first round of play in a game with three players. 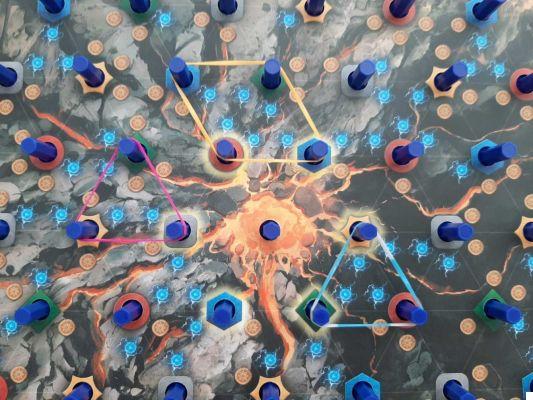 End of the game and scoring: to win you have to go to the end of the rounds with 7 energy crystals. Discard the seven crystals and exchange any excess (if you have them) for victory points.


If you have less than 7 energy crystals, you must abandon all your treasures and automatically lose the game.

In this scenario you have been catapulted into a city built on multiple islands joined by a network of canals that overflow with energy. Unfortunately, this city is destined to collapse and you must save its riches before that happens. Build bridges on its canals to be able to cross them and collect more Elastium that will allow you to move faster.

Additional preparation: you have to use the scoreboard n ° 3 if you are 2,3 or 4 players.

Additional rules: the players have to start by connecting with a rubber band one of the pins with the halo along the side of the board closest to them (each starts from a different side). Channels can be traversing you only with bridges, that is, by a rubber band that joins two pins, one on each side of the channel. Energy crystals can be obtained by building a bridge. You can get valuable items just exploring the sectors. In this scenario, enclosed sectors are ignored.

In the example shown in the picture, the pink player, during the various rounds, has explored sectors on three different islands and crossed a channel at three different points. 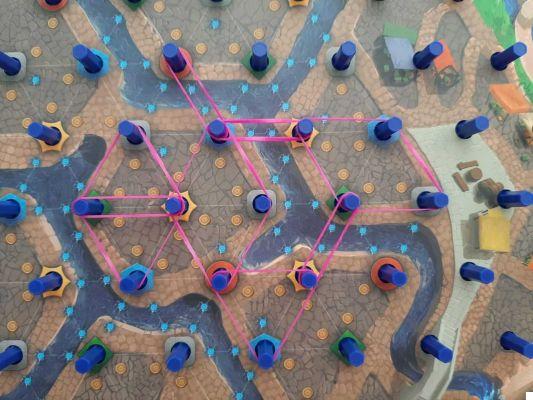 End of the game and scoring: whoever has reached or exceeds i 18 victory points. The final round is played to the end.


Scenario n ° 4 - THE DRAWINGS ON THE PLATEAU

The scenario opens with you finding yourself on a deserted plateau, crossed by enormous lines that form mysterious designs as evidence of an ancient civilization that lived in this place.

The drawings are the only thing of value on this plateau, they are the source of Elastium and they will give you wealth and fame.

Additional preparation: use the scoreboard n ° 4 if you play with 2,3, or 4 players

Place the round counter marker on space 0 and advance it each time a new round begins.

Additional rules: the players start by connecting a free pin, surrounded by a halo, which is in the center of the board.

The purpose is to complete more designs possible, avoiding empty spaces. The drawing is considered complete when all the triangular spaces of which it is composed have been explore, it doesn't matter if they belong to one or more players.

The scoring rules are as follows: 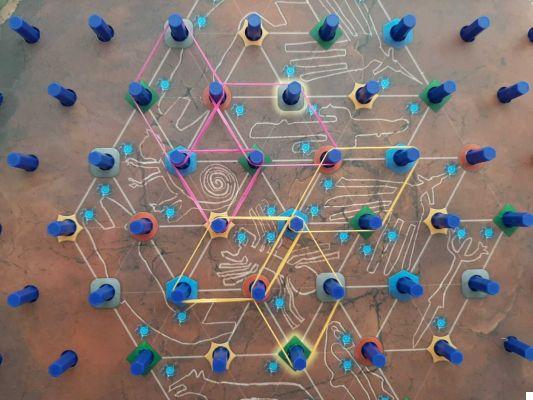 End of the game and scoring: the game ends when a certain number of drawings are completed:

The final round is played to the end.

At the moment my favorite scenario remains the third, The lagoon city… it will be reminiscent of Venice and its canals. But remember that it is not over here, the second part of the guide will come out shortly with the explanation of the last four scenarios.