Attention! The Dream review might brighten your dreams, but it might also fuel your nightmares. Read with caution

Hoping not to upset your dreams, today we talk about Dream - Dreams and Nightmares, a game for 2 to 4 players from Little Rocket Games. During the game your goal is to be able to create a row of Dream cards, whose numbering must be in ascending order from 1 to 6, and to hinder your opponents with Nightmare cards.

Inside the box we find a deck of cards divided into the following categories: 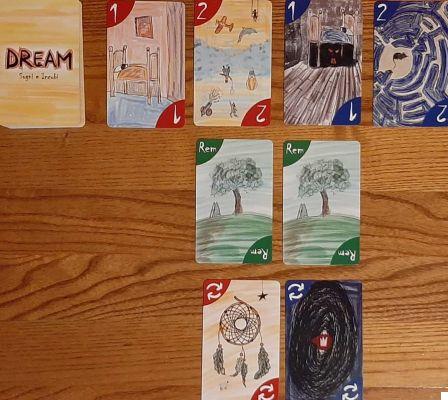 Setup and How to Play | Dream Review

Il setup is very short: shuffle all the cards and give four to each player, the ones that are left put them in the center of the table and they will be the draw pile.

The game is played clockwise and during their turn the player can do one of these two actions:

You can have a maximum of 10 cards in your hand

He wins the game whoever creates a row of Dream cards in ascending order from 1 to 6.

Let's now talk more specifically about the cards and their functions:

Dream is a card game where dreams and nightmares challenge each other, it is a strategic game, but at the same time light and with simple mechanics. Both in the pros and cons I insert the illustrations, of some I love the style (for example the Convert Dream card with the dream catcher) and of others a little less, because I find them a little too dark for a game that starts from 8 years old . The only really negative side is the format of the instruction booklet, because the “accordion” format after several uses risks wearing out and breaking.