Finally, in this review, we talk to you in full about that masterpiece that is Dragon Quest XI S, arrived in its Final Edition also on PS4 and Xbox One home consoles.

We already talked about it in our special dedicated to JRPGs some time ago, but thinking of being at the end of 2020 and having the good fortune of finding ourselves again praising a title like Dragon Quest XI is as strange as it is satisfying. The eleventh chapter of Square Enix's second most famous series of JRPG arrived in 2018 on PlayStation 4 and Xbox One, only to be resumed, not even a year later, on Nintendo Switch with a certainly less sparkling edition, but with the same quality and much more content. It has been more than a year that we have been waiting for the arrival of this edition also on Sony and Microsoft consoles, but everything was silent and we were almost losing hope of seeing even a paid DLC. It did not, and here we are talking about Dragon Quest XI S: Echoes of a Lost Era Final Edition.

A really long title, but which embodies the concept underlying this edition. After a long turning point, even owners of PlayStation 4 and Xbox One (or next-gen consoles in backward compatibility) can finally enjoy all the content added to the edition of Dragon Quest XI initially released on Nintendo Switch. Considering how much it made headlines and how much it was appreciated by the public and critics, it is now banal to reiterate how high-quality the title of Square Enix is., how much it has to offer to all JRPG fans and how much emotions and challenges gamers still today, more than two years after its release. It may be trivial, but we are not tired of doing it yet, and we want to take this opportunity to tell you about it. So welcome to our review of Dragon Quest XI S: Echoes of a Lost Age, the Ultimate Edition.

The narrative premises of the various Dragon Quests are always rather banal, obvious, but not for this reason not enjoyable. Basically we always start with an anonymous Hero, to whom we can only give a name, with a troubled past and an uncertain future. Ours, as a Hero, sets out on an adventure leaving his small village after discovering that he is nothing less than the reincarnation of the Lucente, the hero who manifests himself when the darkness is ready to strike. A rather troubled journey, but in which he will meet trusted companions and friends and will discover that every facet of light will always be accompanied by darkness.

What Dragon Quest shine for, as we said at the beginning, is certainly not the plot, which can be summarized as you have seen in a handful of lines. What Dragon Quest shines for is… everything else. And Dragon Quest XI is, we will repeat until exhaustion, perhaps the best chapter of the entire series. Starting from the atmosphere halfway between fairy tale and epic that permeates the whole work of Square Enix, albeit this time in a more modern key. The excellent design work done by Yuji Horii and the eternal and tireless trait of Akira Toriyama meet in fantastic settings, timeless cities, breathtaking landscapes and damn cute and cuddly monsters. 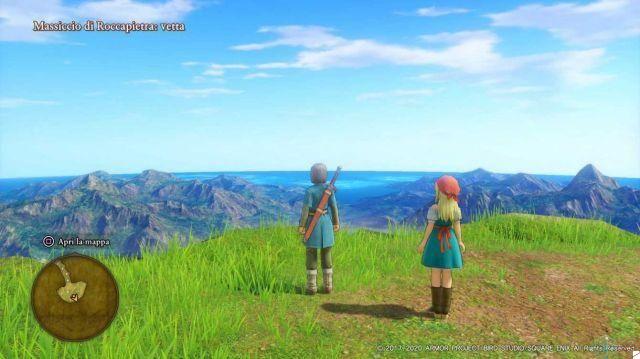 The eternal contrast between good and evil, between Light and Darkness does not affect the colorful world of Dragon Quest XI which, in the eternal spirit of the series, does not go out and never ceases to amaze with its extravagance. The explorable cities are all unique, full of secrets, objects, closets to open and vases to break. Each secondary character we meet will have its part in the narrative, more or less important it may be, and each will be unforgettable in its own way.


What shines even more in Dragon Quest XI is definitely the turn-based battle system. Because if you think that playing a turn-based JRPG in 2020 can be boring and repetitive, the title of Square Enix, together with others of the same company (see Bravely Default or Octopath Traveler) will make you change your mind. Each character will be able to specialize in at least two different weapons and an additional branch of particular Magic or Techniques, greatly increasing the degree of customization and differentiation for each game. The use of the skill points that will be given to you at each level up will allow you to gradually unlock stat boosts, new techniques and increasingly powerful spells. 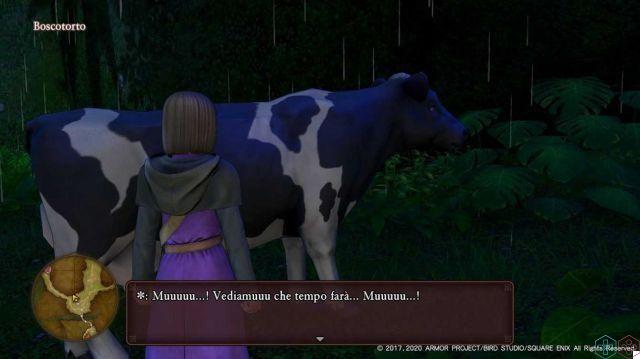 The fights themselves will not be difficult to manage, quite the opposite. The only flaw in terms of gameplay for Dragon Quest XI is the much too low level of general difficulty. JRPG fans will almost never find obstacles in the progress of the story and will have the right amount of challenge only in some secondary combat. Also consider that in Dragon Quest XI S there is no game over and a defeat of the party will simply bring you back to the last place you slept with half the money (use the banks!). Novices may have some problems in the early stages of the game, when the amount of healing and resources is just below the survival level, but progressing and unlocking healing and protection spells to no end… easy life for you too.

We come to the interesting part of this review, because we realize that if in 2020 you are still looking for opinions on Dragon Quest XI it is because, most likely, you are more interested in the news of this Final Edition. As we said at the beginning, Dragon Quest XI S: Echoes of a Lost Era is the version of the title released by Square Enix on the Nintendo Switch, with a few less graphic details, but a lot more content. And we're not just talking about unlockable costumes or some additional game area, the S version has even included the ability to play the entire Dragon Quest XI experience in 2D 16-bit version. 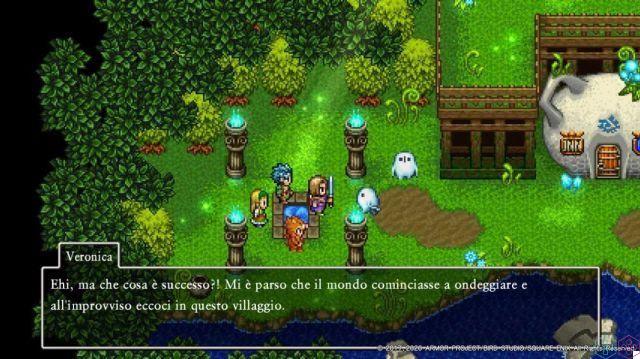 Traveling from the city of Kaldoh towards Galoppoli, once we have received the Sultan's pass, we will meet one of the small evanescent creatures that we can often admire in strategic points of the various maps. This time, however, we will be able to interact with him and discover that he is part of the Tempirei race and that, of course, he will need our help with a somewhat thorny issue. The Tempirei are the keepers of time and world history and live in the city of Archonia, the first that we will be allowed to explore exclusively in 2D mode. The villain on duty, however, tore off some pages of the books that tell the events that happened in the past of the world, risking to destroy the foundations and, thus, change the course of history. Our task will therefore be simple: to find in the world the Tempirei sent to find the Passat-Words necessary to enter the various volumes, recover them and rewrite the story exactly as it should be.

The 2D mode is certainly evocative and nostalgic, but it has some critical issues not just. First of all, the low level of detail makes it somewhat sloppy compared to the colors and the particularity of the 3D models. Furthermore, even at the level of gameplay, it will often be difficult to understand which character is affected by altered statuses or by the Perky mode, for example. We could have done more, that's for sure, but the Tempirei storyline adds several hours of gameplay and tons of challenges, some of which will satisfy even hardcore JRPG fans. 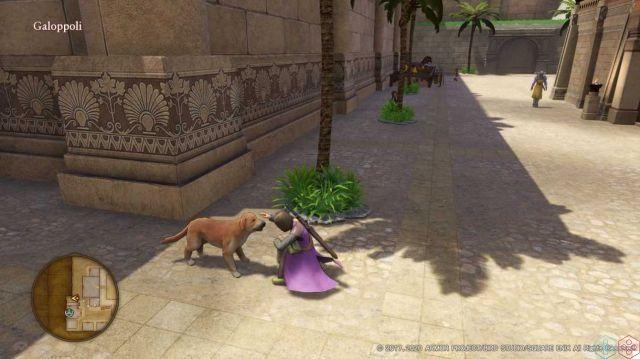 There are many other additions to Dragon Quest XI S: Echoes of a Lost Era in terms of gameplay and many of these improve the general quality of life of the title. Starting from the possibility of significantly accelerating the clashes, up to making them practically instantaneous (thus speeding up the obtaining of experience points and skills), up to the possibility of calling the horse from any point on the map with the Equine Whistle and to use the Travel Forge outside the camps scattered in the various game maps.

Furthermore, the rearrangement of the soundtrack in orchestral version and the ability to hear the Japanese dubbing and to be able to select five different languages ​​for the lyrics is a gift that anyone who has played the basic version of the title has been looking forward to. An edition, in short, that has so much to say and that, we can safely admit, it really makes sense to exist as a Final Edition and not as a simple paid DLC. 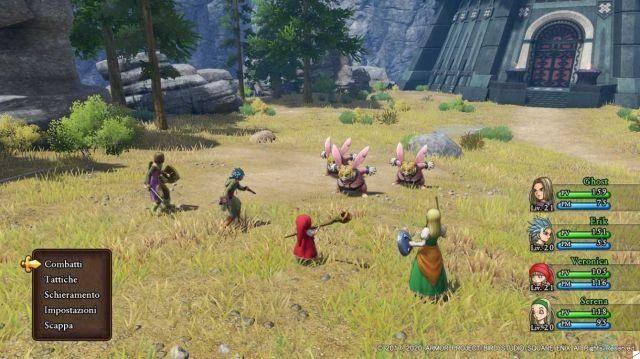 We expected, however, that the arrival of Dragon Quest XI S on PlayStation 4 and Xbox One would be more… triumphant. Technically speaking, in fact, this Definitive version arrived on the home consoles of the last generation is exactly the same that runs on the Nintendo Switch. And if Dragon Quest XI S on the Nintendo hybrid has been almost universally defined a "miraculous port", the title ran well following a series of graphic compromises that had eliminated most of the minutiae and details that made the basic home console edition truly spectacular.

So eliminate a lot of shadows and details in the game world, including for example blades of grass in the distance (which magically appear as you run across the game map), or weapon and armor shaders and so on. A necessary compromise, of course, to allow the game to run at 30 fps on the Nintendo Switch and that, let's face it, did not disfigure the title of Square Enix in the least, especially if in portable mode.

What we expected from the return to the home console, however, did not happen. The game has remained exactly the same, with the same lack of detail and details, despite having a higher graphics resolution and a frame rate (almost) always fixed at 60fps. A real shame because it shows the laziness with which the company wanted to bring Dragon Quest XI S on PlayStation 4 and Xbox One. However, we must admit that ours is fussy and that the title remains a masterpiece from almost every point of view. Novices and those who do not know the basic edition of the game will not even notice these shortcomings, while fans can return to fall madly in love with the adventures of the Hero in the lands of Erdrea. 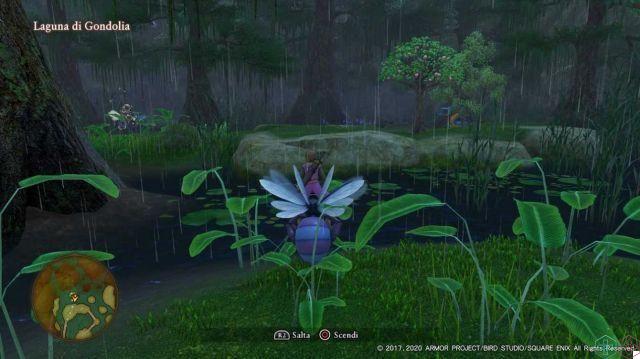 To wrap up our Dragon Quest XI S: Echoes of a Lost Era Ultimate Edition review, Square Enix could do more. And we say it with the awareness that the title is a masterpiece from all points of view of simple entertainment: simple and effective script, unique gameplay and that will make you love turns again. Iconic characters, wonderful cities, always intriguing exploration, many hours of gameplay that can be multiplied according to the level of completeness you want to achieve. If the company had had that extra spark and that spirit of accuracy, we would really have been in front of the Definitive Edition of the Definitive Masterpiece. An even greater masterpiece than Dragon Quest VIII. We said it.

9 Definitive (or almost) edition of a masterpiece