Let's find out together, in this quick review, if the porting of Dragon Ball Z Kakarot on Nintendo Switch is valid for a first or second purchase: welcome back, Z warriors!

When it comes to anime tie-ins, Bandai Namco is definitely the flagship company. Starting with Jump Force, to move on to My Hero One's Justice and finally to get to the complete coverage of the Dragon Ball franchise with titles, strictly two-dimensional or three-dimensional fighting games, always of good quality. Dragon Ball Xenoverse 2, Dragon Ball FighterZ and, deviating a little from the classic stylistic features of Bandai, Dragon Ball Z Kakarot, a hybrid action-rpg that follows more faithfully than the other titles the original feats of the Z warriors.

The title originally came out in January 2020 on PC and Console, but has only recently arrived on the Nintendo Switch. Included in the porting offer, there are also the two DLCs that make up the "A New Power Awakens Set" package, including the two additional contents (these of questionable quality) that narrate the films "The Battle of the Gods" and "The Resurrection of F". We had the chance to try it thanks to Bandai Namco, and we therefore welcome you to the review of Dragon Ball Z Kakarot in its version for Nintendo Switch!

We have already talked about the game with a review dedicated to the PC version at its release last year, and you can find it by clicking here. We therefore do not want to dwell too much on the "what" is Dragon Ball Z Kakarot, but a little something will have to be resumed if we want to start this review. The game is a rather simple action-rpg, perhaps too much, in its mechanics, but that results in them rather fluid and much more accessible than other 3D fighting games of the franchise. The fights will take place in 3D spaces against one or more opponents and will provide you with the arsenal of skills and techniques typical of the Z warrior you will be impersonating.


Through combinations of simple attacks and special abilities (which obviously consume Aura, fans of the franchise will surely know) the various battles slip away very quickly and it will be really difficult to die. A novelty of the Nintendo Switch version is the introduction, much hoped for by fans, of the difficulty selector that will allow you to increase or reduce it at will. Outside of those imposed by the main plot, many clashes will come to life in the dozens and dozens of secondary that Dragon Ball Z Kakarot will put in front of you during the adventure. 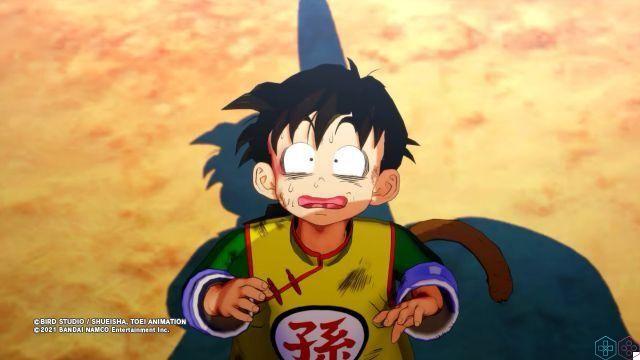 The only point of separation between the original story of Toriyama and the game is precisely the sub-quests, which are in fact subdued and only useful for leveling and obtaining rare materials and objects. And the second and last novelty of the Switch version of the game concerns the addition of two new sub-quests. Nothing more, nothing less: otherwise the port on the Nintendo hybrid is practically identical to the original. Precisely for this reason, we refer you to last year's review for all the details on gameplay, narration and so on.

Bandai Namco's goal with this title is only one: to delight fans. The game is an action-rpg that traces (quite faithfully) the adventures of Goku and the Z warriors from the arrival of Raditz to the defeat of Kid Buu, collecting all of Akira Toriyama's original story in about 30-35 hours of gameplay (you will exceed 50 if you decide to do completism). 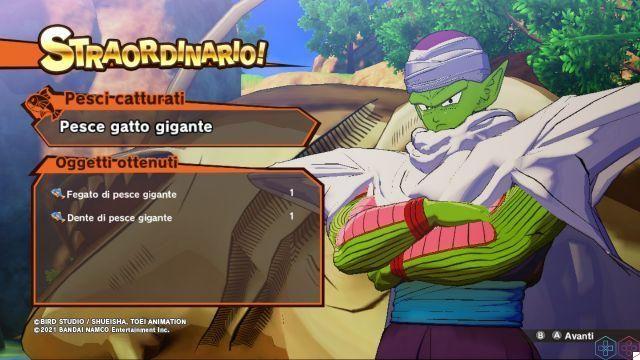 This means that in the course of the adventure that will put us in the shoes of Son Goku and various other iconic fighters, we will be able to explore iconic settings such as the Kame House or the Karin tower, as well as the snake that leads to the planet of King Kaio. All settings reproduced in detail, both in the (few) interiors and exteriors, with a decidedly vast and colorful open world, but which continues to seem empty and even more bare to us on Nintendo Switch, which, as we will explore later, had to compromise.

The feeling, however, has remained exactly what we experienced a year ago: nostalgia. Bandai Namco has been able to wisely exploit the combination generated byUnreal Engine 4 and the Cel Shading used in the cutscenes, which show a character design very similar to the original mangaka, making Kakarot a real transposition slap. The completeness of the port, however, is lacking due to a choice that we have not well understood, namely the Failure to include Trunks-centric DLC. Considering the poor overall quality of the three DLCs and the cost of the complete package, we would have preferred to have the complete adventures of Dragon Ball Z Kakarot in our hands, to make it even more captivating. 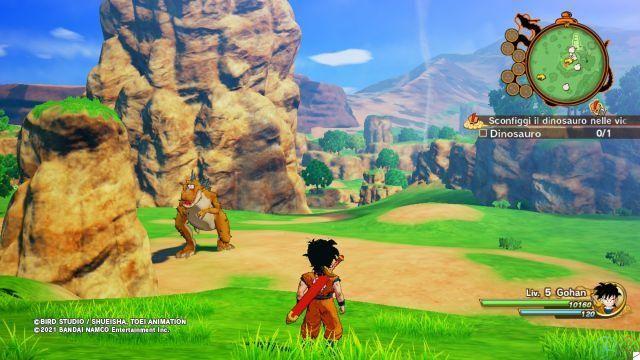 Now let's move on to the focal point of this review: how does Dragon Ball Z Kakarot fare on Nintendo Switch? The short answer is "pretty good", but we had little doubt about this. We have seen, over the last few years, miracles like The Witcher 3 running all too smoothly on the small hardware of the Nintendo hybrid, so we approached the title knowing that it wouldn't be all that bad. Of course, Bandai Namco had to go down to a certain degree of compromise, greatly diminishing the level of detail.

The resolution a bit too low, especially in dock, and a anti-aliasing filter that fails to cover the imperfections of polygonal models all that well of the characters, certainly make the game less "beautiful to look at" than its PC and console counterparts, but that was pretty obvious. Let's admit that during the fights these small defects become almost imperceptible and let's add that on the Frame Rate front the title is very solid on 30fps, except for some slight drop in moments that are too excited. We also noticed some slight and very strange drops during some cutscenes, but nothing that could affect the use of the title. 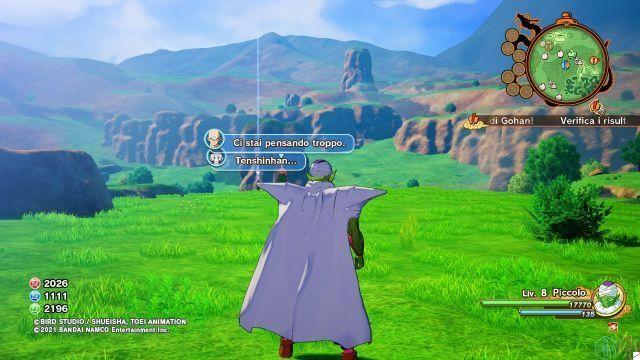 Also present an annoying pop-up of the elements on the screen during the exploration phases of the open world. Considering that the level of detail has dropped dramatically, the fact that the few elements on the screen appear a few meters away, especially in portable mode, is something we would have liked more refined and less annoying.

For the rest, Dragon Ball Z Kakarot takes it with him Original and remastered soundtrack of iconic Dragon Ball Z anime tracks, another wink to fans of the original series who will surely also appreciate the possibility of selecting the background of their adventure from the appropriate menu. English and Japanese voiceovers available, both quite good, and excellent localization of the Spanish lyrics. 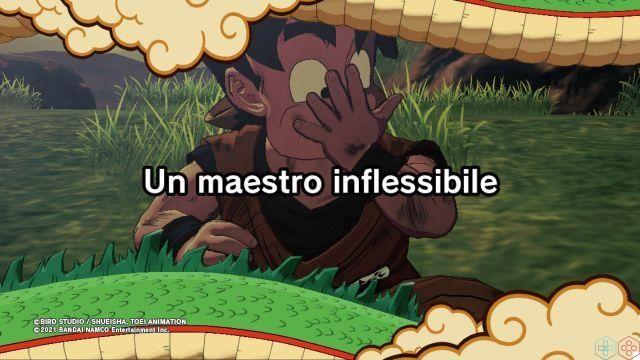 Ultimately and to close this review, Dragon Ball Z Kakarot on Nintendo Switch behaves more than discreetly, albeit with some technical compromises that we can safely accept. The adventure of Son Goku and the Z warriors on the Nintendo hybrid is pleasant, solid and full of content, albeit practically identical to the one released a year ago, if not for a few small additions. Too bad for the lack of and unjustified addition of the DLC dedicated to Trunks, which makes the product incomplete and cut off. For the rest, if you haven't played Kakarot on other platforms and you are a fan of the franchise, you have no more excuses.

Dragon Ball Z Kakarot is available on PC, PS4, Xbox One and Nintendo Switch. What do you think of the Bandai Namco title? Write it to us below in the comments, we will continue to keep you updated with all the news on videogame and tech! And if you are interested in game keys at affordable prices, we recommend that you take a look at the InstantGaming catalog!

Dude review, Where Is My Beer ?: a beer against the summer heat ❯