Doom Eternal review: past, present and future of FPS

The most famous saga of monsters is back on the platforms. Let's see in this review how Doom Eternal performed

Four years after its return with great fanfare, the sequel to Doom (initially announced as Doom 4). The story that began in 2016 finally has a point of arrival and closes what is the circle on the events of Slayer. Finally we will discover the whole plan of the developers and we will live for the last time, at least for now, the adventures of one of the most famous sagas in the videogame world.

But how did the title behave in our hands? We just have to start this Doom Eternal review to find out. Before continuing, I would like to point out that this review will focus on the single player only; it will be our concern release another one related to multiplayer in the coming days.

The new title of Id Software e Bethesda takes up the events of the previous chapter. We were in fact left with the Slayer who, after losing the Crucible stolen by Hayden, is teleported away, but with the promise that one day the two would meet again. In this chapter the hero continues with his fight against the demons and in order to defeat them definitively he must first eliminate the three Hell Priests.

This new title reincarnates what was the spirit of the first chapters, but raised to the nth degree. Although it is one of the FPS par excellence, in this new chapter we can find fused together puzzle game elements in fully platforming scenarios. To progress, therefore, you will not only need to know how to kill the various demons, but you will also need good timing and coordination as well as a good dose of intelligence to solve the various puzzles.

The first substantial difference with all the other chapters, to be kept in mind in this Doom Eternal review, can be seen right away. If in the previous chapters the first weapon of the Slayer was a gun, in Doom Eternal the hero will be equipped with a Shotgun. From the beginning, therefore, it is clear that the developers wanted to give a more dynamic and ferocious impact to the various clashes that will take place during our adventure. However, these aren't the only changes made to the combat system.

To put even more meat on the fire and make the game as violent as possible, the developers have decided to decrease both armor plates and ammo found by exploring the map. It will therefore not be difficult to find yourself without ammunition in the most important moment of a battle or without a shield. Both will come to help us in this case shoulder gear, be it chainsaw. With the first it will be possible to ignite the enemies to make them release parts of armor, while with the second we can slice all (or almost) the opponents to obtain ammunition of all types.

Close encounters will therefore be important to survive the campaign, but they don't have to be the only kind of approach to be adopted. Any monster, be it simple Imp or Pinky, will have weaknesses that you will have to exploit to be able to beat them quickly. To limit the offensive power of Revenant and Mancubus, for example, you will have to destroy, with a well-aimed blow, the shoulder rocket launchers of the first or the armor of the weapons of the second.

They will come to our rescue nine weapons which will be unlocked as always in the course of our adventure. These will be: Shotgun, Heavy Cannon, Plasma Shotgun, Rocket Launcher, Shotgun, Ballista, Machine Gun, BFG 9000 and Crucible. Almost all of them will be equipped with unlockable modifications exploring the various maps; it will be possible to achieve mastery with each modification simply by completing a very specific objective.

Masteries, as in the previous chapter, will provide us with gods extra bonuses that will make the weapons truly unstoppable. If you want some advice on what are the best modifications for each weapon, I refer you to our guide accessible by clicking here. 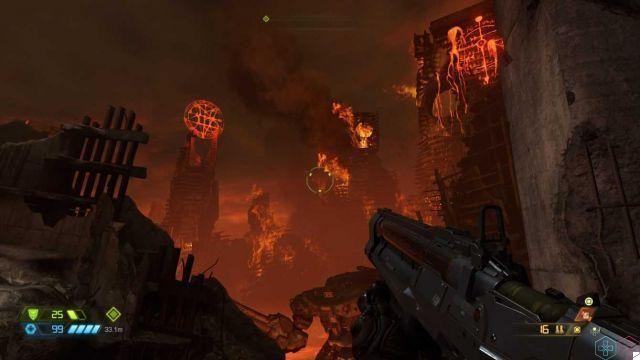 What world would it be without monsters? Surely not that of Doom Eternal which in this case makes their presence the key point of the adventure, contrary to the previous chapter which was mainly focused on the novelties of combat. With the new graphics engine id Tech 7 the graphic improvements are noticeable a lot, but they are not the only absolute novelty.

If on the one hand the monsters are richer in details, on the other there is a "back to the origins"With models faithful to the first demons released in Doom and Doom II. It was also roster implemented precisely to ensure different types of combat, which in the 2016 chapter could be somewhat monotonous.

From the first two chapters of the saga have been reintroduced, to the delight of nostalgics, the Arachnotron and the Elemental of Pain, creatures that in the last two chapters had been completely removed. To these are also added other demons introduced in this chapter only and which complete an already rich roster. 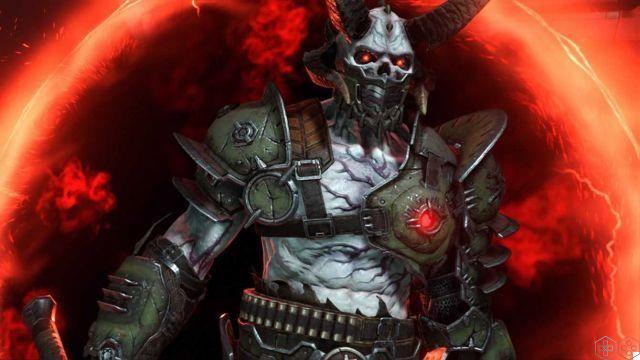 During the adventure you can also upgrade our armor and related shoulder weapons. How can these improvements be made? To upgrade the armor and shoulder weapons you will need to find i Sentinel Crystals. These particular items will allow the player to unlock some very useful passive upgrades during the campaign.

From the simple magnet that will allow you to collect resources from a greater distance to the jet of napalm, these power-ups will make your life a lot easier. To get a more detailed picture and know which ones are the best, I refer you to our guide by clicking here.

Various improvements can also be obtained thanks to armor points which will affect our exploration skills. From the use of elements of the environment, to the upgrade for the fragmentation grenade and the cryogenic bomb, to small improvements for our skills. By unlocking them all we will truly be unstoppable and we will be able to withstand hordes and hordes of enemies.

To all this then others are added three passive powers that can be obtained thanks to rune. These will be nine in total, but only three of them can be equipped at the same time, depending on our needs. To find out which runes are and which is the best combination, I refer you to our guide by clicking here. 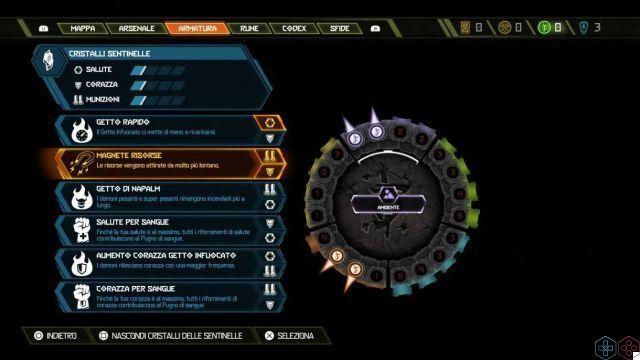 Unleash the metal in you - Doom Eternal Review

As expected, the new id Tech 7 engine, specially made by id Software for games of this caliber, has made some graphical improvements. Well-lit environments with models and textures worthy of a game of the caliber of Doom are the masters and immediately catch the eye of the player. The increase in quality over its predecessor is clear. To this important improvement is added the complete restyle of the models related to demons which are completely based on what were the first models of the game released in 1993.

Also in the audio sector we find some significant improvements with sounds that seem more faithful to what the imaginary collective is. However, what leaves us most satisfied is the entirely metal soundtrack that manages to envelop the player in every situation. From a metal requiem for the most “religious” moments to pure heavy metal during the most heated combat phases, the soundtrack will be able to offer the right background during your adventure. In short, at the end of the game you will find yourself with long black hair and a beard gathered in huge Viking braids.

Input lag is completely non-existent or in any case it does not affect the gaming experience in the slightest. This guarantees immediate reaction times, as it should be for a fast-paced gameplay like this. 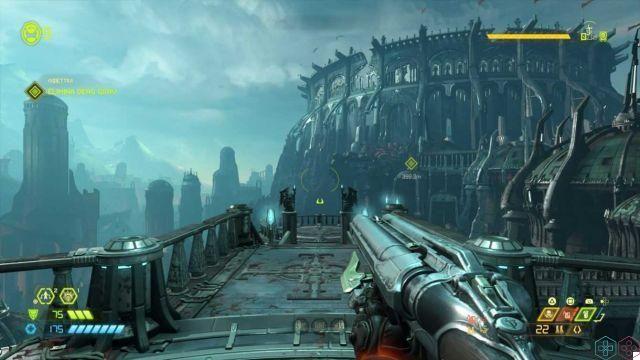 We have now reached the end of this review on Doom Eternal (at least as regards, we repeat, the sector single player and campaign) and the time has come to draw conclusions a bit. The title is proposed as the final chapter of the adventure that began 4 years ago. Although similar to the previous one, the new graphics engine has made substantial visual changes, making the game graphically perfect or almost.

Doom Eternal can be identified as the past Doom of the next gen, taking up everything that made the saga timeless and bringing it to what is the present of the videogame world.

See for example the return to the first models of the demons and the same puzzle game and platform components. However we have pointed out in this review how Doom Eternal is also innovation, both from the point of view of the truly frenetic gameplay, and for the dynamism that is offered thanks to the various demons present in the roster. Extensive customization comes right away with weapon changes and later thanks to the use of runes and various upgrades. In conclusion, a dip in the past but with all the innovation of the present. 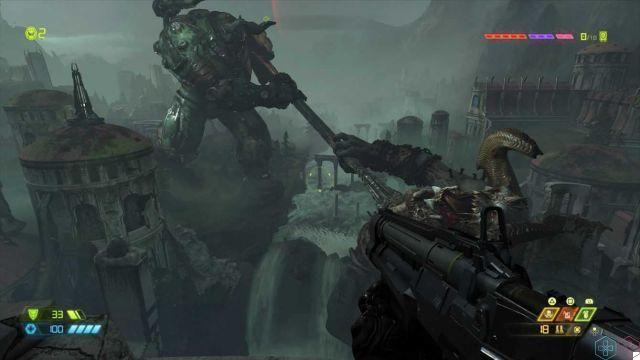 Finally, it is very interesting to be the Possibility of impersonate a Revenant during the campaign; however this possibility is only given to the player once. We wouldn't have minded impersonating other demons on our adventure, but we fully understand that this choice could be somewhat risky and "dangerous".

That's all for this Doom Eternal review. We remind you that the game is available for PlayStation 4, Xbox One, Stadia e PC at the recommended price of € 69,99 for the console version, while € for the PC version. In order not to miss further the Doom Eternal multiplayer review and future news regarding the videogame world, continue to follow the pages of techigames!

add a comment of Doom Eternal review: past, present and future of FPS