Love and desire, understood as passion, are the two great opposing forces in the human soul. The first, aimed at building, and the second at consuming and destroying. Can they coexist? Or must one of the two necessarily win over the other? Don't Make Love, a dialogue simulator developed and released at the end of 2017 by the Spanish Maggese, tells us about this conflict

And it does so through a original pretext and absolutely spot on: Don’t Make Love is the story of two praying mantises. They love each other, and have been living as a couple for a long time. It is time for them to make a very important decision: to mate, or not to mate to crown their love?

A love that can end in tragedy?

This crossroads is melancholy: in fact, praying mantises are very particular insects. Following mating, the female kills and devours the male mate. Our task will therefore be to assume the role of the male or the female and lead a conversation line by line to decide "what will become of us".

The beauty and magic emanating from this title are not quantifiable: if this were a review of a literary work, I would spend hours and hours talking to you about how thisnarrative experience you dissect love, of how everything can be interpreted in a thousand ways, and we could debate by bringing up philosophy, literature, psychology, and so on and so forth.

As you may have guessed, Don't Make Love's focus is on artistic-narrative component. I don't want to tell you anything more about the plot, since even the slightest hint could ruin your gaming experience. It is enough for you to know that my "emotional chords" have been successfully touched over and over again. 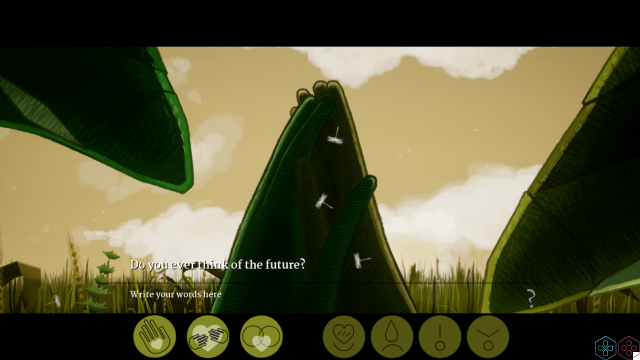 So let's come to us: how Don't Make Love behaves since playful point of view?

A simple and immediate game

First of all it should be noted that today Don't Make Love is playable in English only. However, we are confident that other languages ​​will be implemented in the future, including of course Spanish. Maggese is a very small software house, and this means that the works could take a lot of time. However, I would like to reiterate that given the simplicity of the dialogues, it would in theory be possible to play even with a bilingual translation app at hand.

Let's start from the main menu: simple, and clean, perhaps too much. The items that appear are just Start, Options, Credits and Exit the game. Although not essential, I would have liked, even through a paid DLC, that some extras (illustrations / drafts) had been included, or in any case some “behind the scenes” content. As indie, content of this type could have made the player more fond of Don't Make Love.

Once the game has started, we will choose whether impersonate the male or female praying mantis and then the background will appear: the two insects in love are walking in a field and at a certain point they stop to discuss their situation.

The simulation of the dialogues is really convincing

The dialogue will then begin, ed we will enter the scene immediately. Don't Make Love is not a visual novel in which it is possible to choose only a limited amount of dialogues, but it is, as mentioned at the beginning, a dialogue simulator, and therefore we will have to extricate ourselves in a question and answer full of emotions.

We can play writing on the dedicated bar, click on icons representing emotions (bottom right will be :-), :-(,: O,> :(), or interact through a caress, a hug or a kiss (bottom left). Our every action will make the conversation proceed, and it is therefore necessary to be careful, and not click at random. But we will be back in a very short time.

Let's break a lance in favor of the title: the game has been developed well, and only on rare occasions we will find ourselves thinking that what we wrote was not well understood. As you can imagine, although the progression of the discussion is studied, and already after two or three runs you will realize the key points, you can write everything that goes through your head, without reservations.

As long as you write sensible things (on the official page of the game it is specified that the system does not respond to any kind of input, as it should be) and in correct English, everything will be recognized. The first run took me about twenty minutes, and I played in a clean and coherent way with the spirit of Don't Make Love (with a positive ending and a melting pot in my throat). I then decided to test the algorithm of the game by being "funny".

Don't Make Love takes you on the "right path" 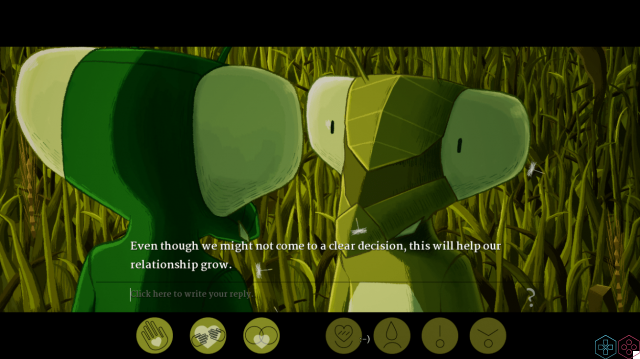 The thing that amazed me is that writing insults, or random things, the conversation takes a completely different turn but without resorting to trivial solutions. If we repeat the same action two or three times, our or our partner will become suspicious, asking us explicitly what our problem is, or we can even make it / make us nervous, sadden, and so on.


And therefore, another positive element of Don't Make Love, is that the game pushes you to interact correctly, and do not use unfair or abusive ways. You will not even be able to write in another language: if you write in Spanish, for example, you will be asked to go back to writing in English.

Graphically, Don't Make Love is clean and very suggestive. The illustrations are carefully drawn. The visual context, that is a wheat field at sunset, is melancholy and romantic at the same time, and the soundtrack in its simplicity and delicacy, helps in the identification. The sound poverty (there is only one musical track in addition to the sound effects) is a virtue in this case: we have the essential and the right.

The hardware configuration needed to run this title is poor, and therefore we can also play it on a good old "toaster".

In conclusion, to whom do we recommend Don't Make Love? THE 7 € necessary for the purchase (you can find it on Steam) make it a video game recommended for all those who appreciate games with a strong narrative component. The gameplay is very interesting, since the dialogue simulation takes place in an excellent way, net of some errors, and the setting and the music reduced to the bone help to keep the tension and climax high during the experience. You will be overwhelmed by a lot of emotions and the pace will always be high, and that's good: the game is short and you won't even get 5 hours of gameplay to get all the endings.

This title embodies a great metaphor of the arcane contrast between love and desire, between reason and sentiment. If you give it a chance, the latest creature of the small but explosive Fallow, we're sure it will leave you satisfied, and this experience will pose many questions in you about the meaning of love.

If you are intrigued by Don't Make Love, go to the development team website and also try the previous video games developed.

add a comment of Don't Make Love review, the eternal contrast between love and desire