We tried Dominari Tournament for you, a management-strategic that does not want to miss battles to the death based on quick reflexes and steady nerves. Is the panorama of RTS enriched by a new valid exponent? Let's see the review together

They say no one in space can hear you scream. Physics shows that this is the case, but in video games, things change drastically: a lot of titles allow explosions, clashes, even blows of mind in conditions of zero gravity, where they would actually be impossible to think about. Dominate the Tournament starts from this idea: firefights in deep space. But it all seasoned with an apparently simple game system, at first glance immediately: in reality quite complex and profound. Unfortunately, at the same time, from time to time really too much confusing.

The title is a small indie developed by the team of Tiny RTS. Already "RTS" in the name will have caused a light bulb to light up on the heads of readers a little later with age, those who at the time (we are talking about twenty years ago) dabbled with real-time strategy and others more slow on Windows systems. What appears a little less justifiable than Dominate the Tournament, you understand immediately, is the price: 13 euros for one RTS indie, which already from the video proves to be based all in all on certainly not mammoth game elements, seems a bit high figure. Our evidence, unfortunately, only confirms this intuition. We spent a few hours in the company of Dominate the Tournament, and we're ready for the verdict.

Off with the clashes! - Dominari Tournament

Do any of you remember Galcon? None at all? Always have time to fill the gap, the title is available as a free online flash game. The intent of Tiny RTS it was a bit to reproduce the same depth of the management and strategic mechanics, but combine them with the speed of the game actions. Basically: to propose an RTS, that is a Real Time Strategy Game, which is so profound, is highly customizable, but at the same time dynamic. Needless to say, today's user would be bored to death if he had to endure the charging cycles of the kind that characterized him until a handful of years ago. The future is for shooters, fast-paced action. According to the developers, some compromises are also needed for an RTS of this type. And we certainly do not syndicate the idea: any idea is as valid as the others, it is the realization that makes the difference. 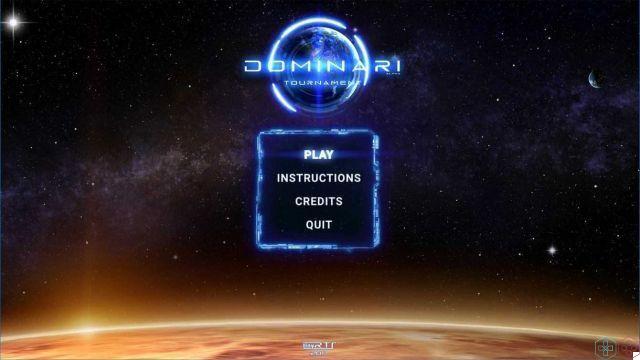 In short, what does this consist of Override the Tournament? In the conquest and expansion of one's own solar system. Planet by planet, satellite by satellite, asteroid by asteroid, we slowly take control of everything we see on the screen, moving from one celestial body to another. In this way, through the wise management of the resources shown on the screen at any time, we become bigger and bigger and more important. The problem is that the opponents will do the exact same thing, be it real players we met by chance on Steam online, our real friends we invited, or a very infamous AI controlled by the game. At this point Dominari discovers his cards, which make him "different" from the many other exponents of the genre. It requires quick reflexes, jumpy nerves, and quick fingers: because every fight could potentially be the last, and the opponent could slaughter us an important position within our ecosystem.

Obviously, resource management is also an important detail: we may be the fastest space gunslingers, but if we are worth nothing as colonial resource administrators, our empire will still be in disarray in a short time. The Dominari Tournament HUD shows us the solar map at all times within which we find ourselves, the colonies, the resources and above all the weapons at our disposal. The title features 20 unique skills, which from time to time of course must be unlocked and upgraded by meeting certain requirements. War in space is merciless. Will we be able to take out our enemies and manage our empire wisely at the same time? 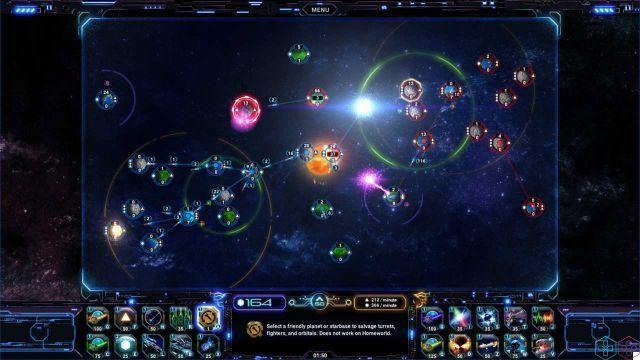 The progression system of Dominate the Tournament it is certainly interesting and opens the way to great potential for customization. It is not so obvious to create a new playground, starting from one planet and then expanding throughout the entire solar system. There are defensive buildings more important than others, but less rapid in construction; offensive possibilities that must be positioned in certain points, and that require certain resources, perhaps effective against a type of enemy assault but not for others.

In short, it is an RTS, and not just a disguised action shooter, this is definitely a plus. It is also true that the technical sector is very poor: it's okay that we talk about indie, but there are some indies that can stand up to triple A at times. Even within a certain monotony of content, Dominari Tournament does not have an inspired or particularly memorable game context: its atmospheres are easily forgotten. A more honest price it would certainly have made a difference, because there are valid competitors on Steam that cost less and all in all offer a challenge at its levels. Often even more inspired.

Dominari Tournament will certainly not be remembered by posterity for donating a new milestone of the genre. It is a good RTS hybridized with action mechanics, it offers some very interesting ideas, others less so. It lacks a meaningful story, unlockable content worthy of interest, and other miscellaneous little things. However, we also consider that it is still in early access, and that the developers are working hard to provide what users are asking for: for example the game chat, recently added. We hope that the title will continue to improve in the coming months, in time for the official release.

add a comment of Dominari Tournament Review: Strategy and Action in Deep Space