The fascinating videogame world of Arkane studio is preparing to break into our tables with the role-playing game dedicated to Dishonored, let's see what it is!

Dishonored, one of Bethesda's most popular IPs, which has been able to carve out a large group of fans, is about to receive its official paper RPG.

Dishonored: The Roleyplaying Game promises to make us experience the decadent atmospheres of the video game and its complex setting; theThe game will be edited by Modiphus Entertainment, authors of titles such as Star Trek Adventures and Conan and will be based on their own game system, that is the 2d20 System; which for the occasion seems to be adapted in a more narrative version. Modiphus Entertainment in the past has already worked on many other paper adaptations of famous role-playing video games, such as Fallout or The Elder Scrolls. 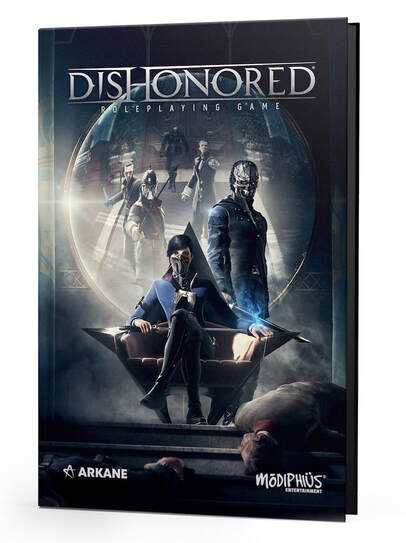 Harvey Smith, former co-creative director of the two videogame chapters, actively collaborated in the creation of this manual, certainly great news for fans of the saga; Modiphus Entertainment also claimed to have hired some writers and artists who participated in the development of the saga to maintain audience expectations.

The Dishonored RPG manual will be hardcover (about 300 pages) and will feature some very interesting content, including: an in-depth description of the world of Dishonored and its lore; a detailed guide on how to create your own protagonists within the game world; a mini-campaign to introduce Dunwall, a city that video game fans will know very well.

Together with the game it seems to be expected to release a series of accessories to enrich the experience such as custom dice and cards.

The game's release period seems to be set for the summer of 2020, we just have to wait for some news and hope for a Spanish edition.
In case you would like to deepen the world of Dishonored you can find more details in our reviews of the second chapter and with our insights.