Blizzard lands on Nintendo Switch with Diablo 3. Hell is now portable, but how does this console react to such an important load? Here is our review

There have been a lot of ports since the release of the portable console Nintendo and not everyone has really met the expectations of the players. But Switch is now the "goose that lays the golden eggs" of all videogame companies, for this reason too Blizzard has decided to bring one of its best titles to the handheld console. Indeed, Diablo 3 has landed on Switch and with a lot of "nastiness".

The game is available with all the published DLCs and all the changes made to the game over the years. Recall that Diablo 3 is a game released for PC in 2012, to then land on the various consoles up to the Nintendo Switch in this month. But the question everyone is asking is: can such a powerful game be 100% supported by the Switch without any problems?

A pleasure for the eyes | Diablo 3: Eternal Collection review

For anyone who thinks that Nintendo Switch is not able to support games that have run a thousand on other consoles, he is very wrong. Diablo 3: Eternal Collection it loses nothing on the new portable console. First of all the graphics; Nintendo Switch has never let us down under these terms, although some third-party games have given some problems at times. Diablo 3 it is not one of these, the game remains very solid and fluid even in cases where you will find yourself with hundreds of enemies that surround you and you will be forced to use all the skills in your possession.


No problem, therefore, neither in laptop than connected to a screen. The only note (which cannot be understood as negative) that I am obliged to emphasize is the increased ventilation of the console when used in portable mode. The audio is not far behind. Excellent in both dialogue and background noises, from enemies to the background of the map. For the language Spanish you will need to install a patch, downloadable on the e-Shop, which weighs well 5GB. 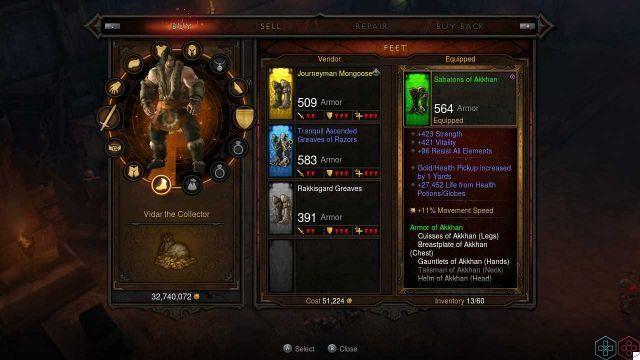 Diablo 3 is a game released way back in 2012 for PC and only this year for Nintendo Switch. Even if the age is advanced for a game, it is still played by its loyalists and by those who buy it for Switch. Among the many there will certainly be many new players who do not know what awaits them.

Let's start with the available characters: Barbarian, Crusader, Cacciatore of Demons, Necromancer, Mago, Monaco e Shaman. Each of them has their own skill that characterize it. Furthermore, the features they are specific to each one. The necromancer, for example, prefers the attribute "Intelligence". In addition, each character will have the ability to wield specific weapons for their class, an example being the Cacciatore of Demons which will be the only one to be able to use strings e crossbows.

Diablo 3 is a Hack ‘n’ Slash with isometric view. We will be transported to Sanctuarium, a planet haunted by monsters and demons headed by Diablo and his brothers. We will be the Nephilim, the chosen one who will have to save mankind and not. There campaign is divided into 5 acts, each with its own twists. We should choose the best equipment and the mix of skills that best suits us, so that we can defeat evil. Beyond the campaign, there is a mode of Adventure which allows us to deal with different missions, which change with each log-in, and get exp, booties e monete.

Another modality is called Hardcore. It is the mode par excellence, the one in which only the best have the courage to dive. In fact, in this mode you will have only one "life", if your character dies you will have to start over with a completely new character. Last but not least is the ability to create a character in seasonal mode. This mode, which is divided into seasons that last a few months, allows you to win gods Awards carrying to finish typical seasonal missions. All modes can be played in a cooperative local e online. 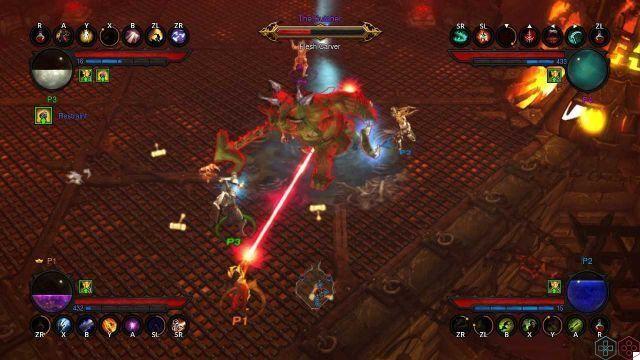 Diablo 3: eternal Collection is inclusive of all DLC which were paid, including that of Necromancer only released last year. With this, the mode was also implemented Adventure (cited above), giving players the opportunity not to get bored by playing and replaying the campaign, but to have fun by being able to follow different missions with each login.

This took the search for legendary material and items to the next level. Of course we will also find the Gates; these are nothing more than randomly generated maps in which we should defeat a certain number of enemies. Between the gates we will find the basic ones and the advanced ones, the latter are numbered and see their difficulty increase more and more, moreover they need "gate keys" to be opened (unlike the basic one which can always be opened).

For the "nintendaries", however, there is an extra bonus. Not just the ability to use amiibo (the exclusive ones should also arrive soon), which allow you to recall some high-level enemies who could give us some rare items upon their death; but there will be the possibility to equip some ali inspired by The Legend Of Zelda: Majora’s Mask Cucco mascot and cornice triforza. Also, we could equip our character with a suit that transforms him into Ganondorf. All these items, however, do not involve any increase in the character's stats.

Like all games already played on Home consoles, Diablo 3 it was preceded by much skepticism. On the other hand, a Hack 'n' Slash so frenetic, on a console that seems so small, who would not have a doubt? Yet the Switch behaves very well, and we have said it over and over again. Diablo 3 really turns a fairy tale, pass me the term. Not even a lag or drop in fps (which always hovers around 60), not even when playing in coop online.

The portability of the Switch becomes a strong point here too, it will be possible to play anywhere you want. In short, the game has really excited us a lot, keeping the weak points that it carries over over the years also in other consoles, one of these is the fact that, locally, every time a player enters the menu to change the statistics of the character, the others will see the game frozen and will have to wait. That said, Diablo 3: Eternal Collection on Nintendo Switch is well worth playing (or replaying).

DiRT 4 review: has rallying never been so exciting? ❯