Destiny 2 Review: Shadows from the Deep, the consolidation of a rebirth

Let's find out in this review the latest expansion of Destiny 2: Shadows from the Deep, between campaign, settings, raids and news

Following the breakup with Activison, Shadows from the Deep is the first expansion of Destiny 2 completely in the hands of Bungie. Let's see in this review if the guys from Bellevue managed to raise further the excellent quality level already achieved with The Renegades. There will obviously be no spoilers other than the introductory mission.

Shadows from the Deep brings us back to the Luna, which we haven't seen since the first Destiny, and which appears immediately very familiar while not lacking in several unpublished areas. The terrestrial satellite is this time much more hostile, with enemies that will challenge even the most powerful Guardians from the first hours of the game. After one brevissima cut-scene we are in fact launched immediately into action, and our first objective will be to make our way through the enemies until we enter the Scarlet Fortress. Here the atmosphere becomes much more dark and ghostly, there will in fact be ghosts, called Nightmares, among the enemies we will have to face. Among the ghosts there is no lack of "Old acquaintances" already settled in the past, but this time they face us enhanced and at the same time, forcing us to retreat.

It will help us to escape Eris Morn, the same one we saw in the introductory video and that we should theoretically have saved us, who will teleport us out of the fortress. Here it is definitely important to point out the further evolution of our character, who had begun to say a few words about it The Renegades, and which we now hear finally pronounced whole sentences. Speaking now with Eris we will be able to unlock any bonus for the pre-order or edition Deluxe, and advance with the campaign. To advance we will have to purify un mysterious artifact completing tasks on the Luna, which we will then be prompted to explore. The Moon is reconfirmed among the settings most beautiful of Destiny, with fantastic views of our planet, and an atmosphere between the dark and the charming created to perfection.

A broader look at the campaign

The campaign Shadows from the Deep turns out to be quite interesting, not on the de level The Renegades, but among the most exciting of Destiny 2. Under the lunar soil, in fact, one of the pyramidal ships seen in part already in previous expansions, and which would have been the cause of the Collapse.

It should be stressed though that the campaign of this latest expansion is more to be considered as the introduction to a much broader story. The story of Shadows from the Deep ends in fact with a cliffhanger, and will be continued in future expansions and updates. Bungie wants to make one thing clear with this move: Destiny is an MMO, with history and the world evolving, and not a casual game to give up after a few days. 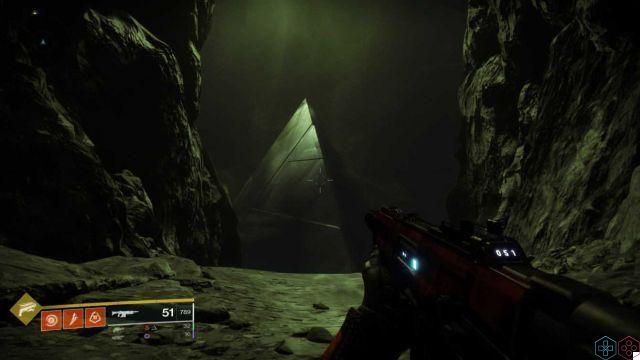 Armor 2.0 and gameplay news - Destiny 2 Review: Shadows from the Deep

With the so-called Frame 2.0, Bungie made several major changes to how equipment works. Now each piece has in fact a certain energy value e 6 statistics (from 3 before), which can be improved with gods against of your choice. Mods are no longer Consumable, and once unlocked they can also be used on different pieces of armor at the same time. Each mod consumes a certain amount of energy of the armor, and the energy of each piece is increased up to 10. Some mods can also improve the finishing moves, the other novelty of Shadows from the Deep.


Le finishing moves they will allow us to finish an opponent who has reached a certain amount of life with a'special animation. However, these moves will not only look good, they will also have benefits, such as increasing the ammo drop of killed enemies or other aid effects also for teammates. However, the finishing moves will have a price to pay: part of the bar Incredibly, but if the bar is already full they will consume nothing.

The calendar for year 3 - Destiny 2 Review: Shadows from the Deep

They will therefore be available to everyone:

They will instead be exclusive to Shadows from the Deep:

Instead, they will require the Season of the Timeless pass: 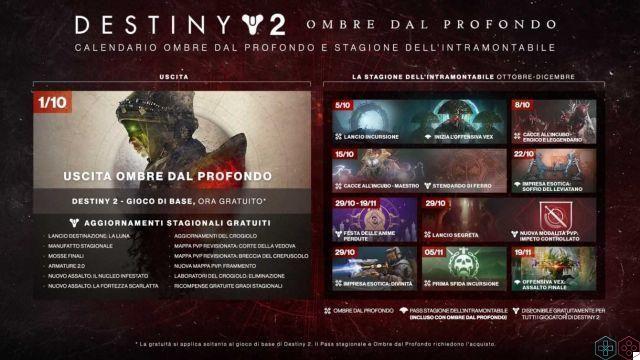 The new Raid and the Vex Offensive - Review Destiny 2: Shadows from the Deep

Available from 5 October, the new raid Garden of Salvation it was first completed after approx 6 hours. Definitely less then the 19 hours it took to complete Last Wish, the Forsaken raid, but this certainly does not indicate that it is less difficult. In fact, the Vex appear for the first time really dangerous, thanks above all to a better exploitation of hiding places and shelters.

Like the rest of Shadows from the Deep, this Raid also offers a exceptional sound design e truly spectacular atmospheres. In the intermediate areas between a combat area and the other we will find in fact waterfalls and vast landscapes rich in vegetation, which are also reminiscent of the glimpses of the raids of the first Destiny. The raid is also quite long-lived, and net of what I wrote before, it is definitely worth considering another excellent point in favor of Shadows from the Deep.

THEVex offensive, an activity for 6 players in the Black Garden, is unfortunately not equally satisfying. If the rewards are indeed excellent and would be a good reason to play the activity several times, there will be the factor of repetition to take away the desire to do it. The activity will always consist inkill various hordes of enemies, to then face their different commanders, without many variations.

Also seen the release of the version free-to-play di Destiny 2, this expansion has been made affordable individually by anyone. There is therefore no need to possess The Renegades or annual pass. To make it even more accessible, all players beginthe they are brought, Power level 750, as the level of all equipment.

The edition Digital Deluxe it costs instead € and additionally includes:

If you are interested in other reviews or news and specials on video games, go to section on our site!

add a comment of Destiny 2 Review: Shadows from the Deep, the consolidation of a rebirth