The cooperative sci-fi Deep Rock Galactic is finally out in its version 1.0, after about 2 years in early access. With this update, the guys at Ghost Ship Games have only further refined what was already a little gem much appreciated by players.

The basic concept of the game is simple, a team of maximum 4 dwarves, of course minatori, which makes its way between procedurally generated mines rich in minerals, and dangerous enemies. Behind this apparent simplicity, however, there is a very immersive atmosphere, and above all, one of the funniest co-op titles of recent years. Let's find out in this review.

The gameplay can be summarized simply by taking all the elements always present in the common imagination about dwarves, and adding to them some firearms and tech gagdets. You drink beer (a lot), crack rocks with pickaxes, and make crude comments while fighting with the enemies that stand between us and our only goal: profit.

Briefly summarizing the context of the game, our team of dwarves is hired by a company not too interested in the safety of employees, who will send us on a mission to the galaxy for the sole purpose of recover precious minerals. After getting the minerals to the spacecraft, it will leave after 5 minutes, with or without us.

Our dwarves can be of four different classes: Gunner, Driller, Explorer and Engineer. Playing with 3 other dwarves will undoubtedly have the best experience, with each class helping the rest of the team in exploration and combat. There will be those who lead the way by lighting the way, who will undermine by creating paths, who will cover the backs of the others with turrets and defenses, and who will create practical escape routes.


Each dwarf has his trusty at his disposal pickaxe, with which in addition of course to undermine precious stones, it can destroy any element of the maps, procedurally generated. Each class also has a main and a secondary weapon to face the various enemies, and different gadgets with which to simplify the exploration. For example, there are 3 flares, useful for illuminating the cave, and which recharge themselves very quickly.

The resources fill up the inventory quickly enough, and to empty it they are left to a robot, M.U.L.E., who will always follow our team of dwarves. It is obviously possible to play alone (in this case we will be accompanied by a sort of drone, Bosco), but you can immediately see that the game was not designed for that. The missions are certainly less fun, and risk becoming repetitive soon. 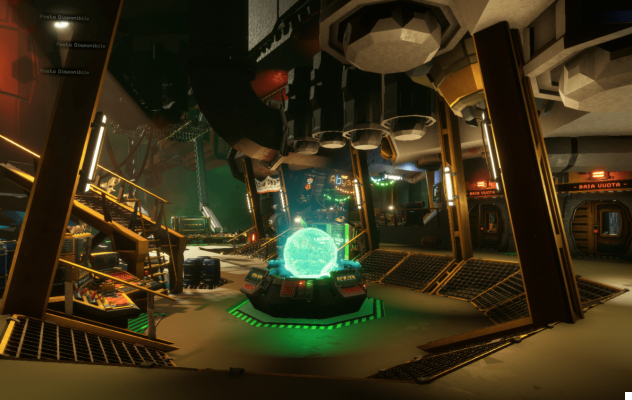 A space base will act as the central hub of the game, from which we will be able to accept missions, customize the character, and of course, stop for a beer. The missions are all fairly simple in their objective, which is almost always to mine a certain amount of minerals. However, some missions are more focused on PvE, asking us to eliminate particularly powerful enemies.

You can choose the difficulty of each mission by adjusting the "danger level”, Which will affect the final earnings. A complete guide for novice players can also be accessed from the pause menu.

A game for (almost) all PCs - Deep Rock Galactic Review

Not everyone has a dedicated PC for gaming, and especially when cooperative play counts so much, accessibility in terms of hardware requirements can help a lot in spreading the title. Deep Rock Galactic succeeds perfectly in this, which with a very simple graphic style, can easily run even on PCs with fairly modest hardware equipment.

Apart from some sporadic scenarios, the graphic style of the game is still appreciable, even if it lacks a bit of identity. The absence of natural light, and the dim lighting of our headlamp, however, help to create an atmosphere in the caves really impressive. To accompany it all we have a soundtrack Synth again not too characterized, but still doing its duty. Despite the simplicity of the graphics, we often find ourselves really admiring the beauty of the maps, which we remember being procedurally generated anyway.


To further increase the chances of being able to easily play cooperatively with friends there is also the cross platform with the Xbox One version, which however requires a little clarification. On PC, the title is in fact available both on Steam and on the Microsoft Store, in the Xbox Play Anywhere version. This means that it will be enough to buy the title from the Microsoft Store to be able to play it both on our Xbox and on PC, while also maintaining all the progress.

Xbox crossplay is available only with the Microsoft Store version, and not with that Steam. In addition, Steam players will also not be able to play alongside PC players who own the Microsoft Store version. Surely it is a shame for those who prefer to always buy on Steam, which in addition to offering more advantageous prices, is undoubtedly a platform of much higher quality than the still unripe one of the Microsoft store. For this time, however, it might be worth making an exception.

A cooperative game not to be missed

Concluding this review, Deep Rock Galactic was a really positive surprise, highlighting that as it should happen for any Early Access title, the developers of Ghost Ship Games they actually listened a lot to the community. The game is appreciable alone, but it really shines in co-op, establishing itself as one of the best co-op games released in recent years, which will be able to give countless hours of fun.

For other reviews, guides, news, and specials on the gaming world, go to the dedicated section on our site!

9 A cooperative game not to be missed

Deliver Us The Moon Review: Look at that Moon ❯