The world of Battle Royale in recent years has become increasingly vast, starting from the famous H1Z1, PUBG and Fortnite up to the less famous, but not worse, such as Darwin Project. We at techigames have tried it and here is our review

For some time now the world of Battle Royale has seen titles such as Fortnite e PUBG, which have become very famous all over the globe thanks above all to the work of the streamers who have made these games their lives. Today, however, a rival appears that seems to be promising and that perhaps, in a little while, could even steal the stage of the Battle Royale: Darwin Project. Let's see what it is all about in this review.

Darwin Project: a look at the history of this particular Battle Royale | Review

Darwin Project takes place in a despotic post-apocalyptic setting in the Canadian Rocky Mountains of northern Canada. As a preparation for a new and imminent Ice Age, it was decided to launch a project (the "Darwin Project" precisely) which is half a scientific experiment and half a live entertainment program. This "project" aims to challenge each other 10 participants who will have to survive the cold and fight to the death in an insidious and ever-changing arena.

Darwin Project has elements in common with other Battle Royale such as Fortnite, but its mechanics are very different from all known ones. The aim of the game, as in all others, is to try to survive all opponents present in the game, but the similarities stop there. In the game, in fact, we should also survive the cold who will be our main enemy for the duration of the fight.


In Darwin Project there are 3 game modes: 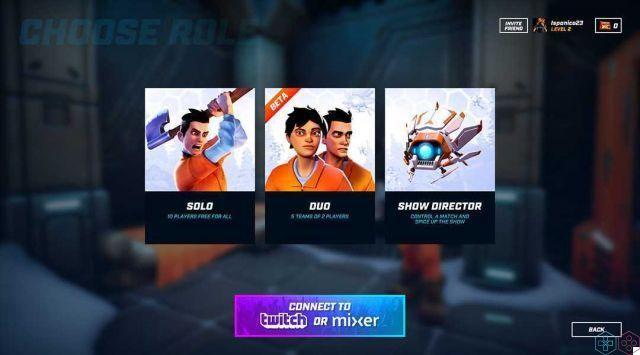 As previously mentioned, matches take place in a Northern Canadian Rocky Mountain arena where the dominant element will be the cold. Our goal, even before the annihilation of the opponents, will be to defend ourselves from the harsh temperatures of the place. Once we are catapulted into the game we will only have one on dress lightly and we will be equipped with an ax and a bow, thanks to which we will be able to survive in the arena.

Playing in Solo mode we will find ourselves against 9 other fierce opponents and we should have our eyes wide open so as not to be surprised while we warm up or while we collect the objects necessary for our survival. In Duo mode, on the other hand, we will be paired with a random player, if we don't have a friend, and we will have to compete against 4 other teams to survive.

Turning around the arena we can find saplings that can be cut down to make wood, armchairs that will provide us with the skin, coffers who can give us a random reward. In addition, gods will be activated in some particular moments points of interest in the various sectors that will provide us with electronic parts. The collected materials will then be used to create:

It will be possible to find everything in the crafting wheel which will be divided into 4 compartments, each relating to a certain sector of objects and skills. We will have various skills and objects that we can insert into the wheel depending on our combat tactics. These can be changed in the main menu. Using crafting frequently in the game, however, will pay off detectable by enemies and there will expose you to a disadvantage. 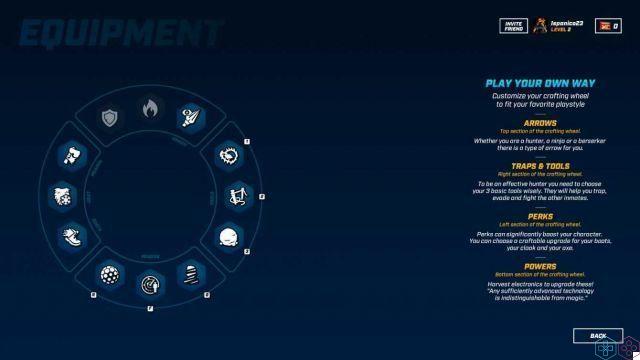 One of the main features of the game is precisely the hunting. Just as our ancestors aeons ago hunted animals with bows and arrows and rudimentary axes, so we can track down the tracks of the various players simply by examining the items left by the opponent's crafting or their resource collection. For a short time the enemies will become visible and we can surprise them with an ambush at the most opportune moment.

This particular mode is typical of the game. It will allow us to find ourselves in the shoes of one special floating camera who will be able to follow the course of the fight and decide the fate of the player we are following.

During the game it will be possible move from one player to another using the numeric keypad, going to collect "action point"Which can then be used to modify the progress of the game, supporting a player or by going to edit the map through actions that will lead to the closure of an area or the activation of some points of interest to obtain electronic parts. 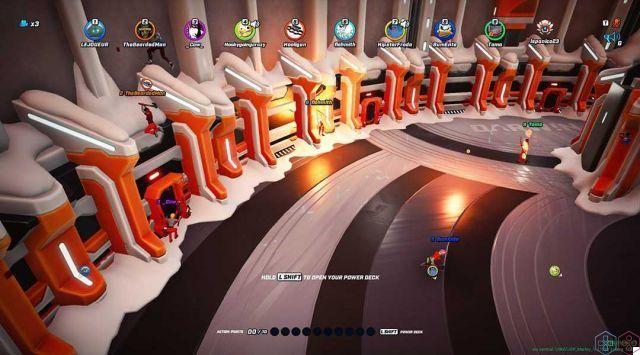 Il audio compartment it is full of effects which are a lot well balanced between them. Contrary to other games, it will therefore not be necessary to go to set the settings as environmental sounds, various effects and voices of the game are well calibrated with each other, allowing us to always remain vigilant without ever missing a detail.

I commands they are all concentrated in a single part of the keyboard, allowing a fairly easy gaming experience even for those not used to the pads. They are easy and intuitive and do not require great typing experience. The character responds promptly to inputs, which makes the game very fluid and dynamic, allowing us to react promptly to some ambushes of our opponents.

Darwin Project: final conclusions for this Battle Royale that could happen to Fortnite | Review

Darwin Project, although still in Early Access, promises well. We already see a setting very similar to Battle Royale with some peculiar characteristics that characterize the game. Although not ready yet, it is complete and very well calibrated.

Dynamic and fun, it allows us to spend hours and hours without ever getting tired. The thing that makes it more challenging than its peers, besides the Show Director mode, is the fact that we are constantly in danger. Contrary to the other Battle Royale in fact, there are no safe zones that allow us to rest a little. The cold will never leave us and if we can't find some material to light the fire, we will risk dying before we have even been able to find an opponent.

What are you waiting for to download this game? Let us remember that it is available for free to Xbox One e PC Windows by Steam. If you liked our review, then don't miss any news about Darwin Project and other Battle Royale like Fortnite and keep following the techigames pages!

Dealer's Life Review: We run our own pawn shop ❯

add a comment of Darwin Project review: the Battle Royale alternative to Fortnite