The last chapter of the saga about the four horsemen of the apocalypse has finally landed also on consoles, let's find out the details together in our review of Darksiders: Genesis Nintendo Switch version

A few months after the release of Darksiders: Genesis on PC, Airship Syndacate brings its little gem to console too. After the failure of THQ, the software house has picked up the heavy legacy of the franchise by developing a prequel chapter of the game narrating the adventures of the horsemen of the apocalypse. Will it have met the expectations of the fans?

Between War and Conflict

Let's start from the basics: Darksiders, for those unfamiliar with it, is a title launched in 2010 by THQ for PS3 and Xbox 360 that tells the story of four horsemen of the apocalypse. The four nephilim brothers, after having foiled the revolt of their people, were elected protectors of the balance between worlds, in particular between Heaven and Hell.

The peculiarity of Darksiders is that in each chapter of the game we find ourselves impersonating one of the knights: in the first we play the role of War, in the second those of Death and in the third those of Furia. Although the franchise has changed slightly in style and mechanics over the years, Darksiders: Genesis is completely different from its previous chapters. From the ashes of the now defunct THQ, Airship Syndacate decides to focus on a low cost (but no less interesting) title, with a Diablo-like isometrica and focusing on the "switch" component between the two characters of the game: War and Conflict. 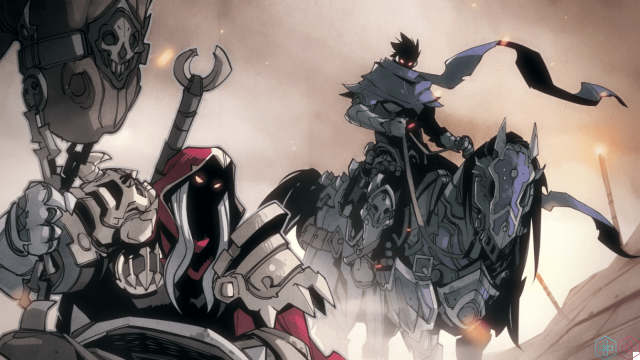 What are we facing? - Darksiders review: Genesis Nintendo Switch

First and foremost, Darksiders: Genesis is a prequel set many years earlier than told in the first chapter of the saga. To stop Lucifer and his misdeeds, War and Conflict will be forced to ally with the demon Samael to thwart the plans of the king of the Underworld to upset the balance between worlds. The story of the prequel, rather than actually adding something new or precious to the story of Darksiders, is a rich excuse to introduce Conflict, the last of the four horsemen that was missing, and at the same time contextualize the story of the first chapter.


While we know War well, Conflict appears almost unknown to fans of the saga, who have only heard the name mentioned briefly. Ironic, funny and jaunty, Conflict will not fail to make fun of his brother with jokes and digs, presenting himself as a character decidedly different from his peers.

For the first time in franchise history, the game features a Diablo-like isometric camera setup. Don't be fooled by the look: this aesthetic choice, as well as making to the best on Nintendo Switch, it makes it a bit of a miniature Darksiders, while still maintaining the main canons of the game. On the contrary, the elements GDR of the previous chapters are missing, leaving room for a much more hack-n-slash chapter carefree and hectic, along the lines of the first. 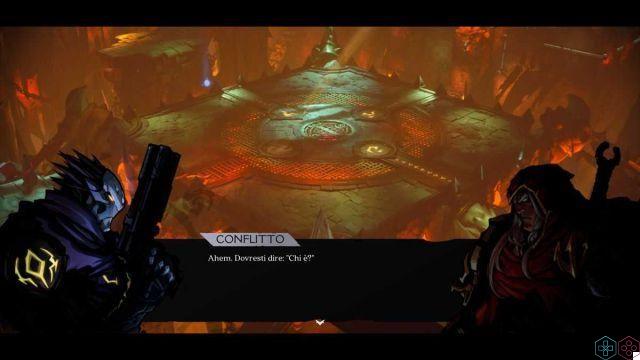 The first innovative mechanic introduced in this last chapter is based precisely on the journey and on the interaction of the two brothers: in fact, during the course of our adventure, it will be possible to switch at will between War and Conflict, both with different skills, weapons and fighting styles. To the gigantic two-handed sword of War, Conflict prefers the faster style of knives and related combos.

Also, while the former is a purely melee warrior, Conflict is capable of using his lethal guns to strike even from a distance. Both characters have abilities characteristic of their weapons: the skill wheel appears rich and well supplied, with the ability to switch quickly. Interesting and fun the possibility to choose between two types of ammunition for the Conflict pistols, selecting them from a good choice of alternatives, all with different effects and firing modes. Through our dear old man VulgrimFinally, it is possible to unlock new combos, skills and upgrades in exchange for souls.


Outside of combat, map exploration mechanics include the use of special skills and combos to unlock locked access points. The puzzle component never fails, continually putting us in front of logic tests and arcade tests. In the latter, the isometric view every now and then plays tricks, deceiving the calculating abilities of the players and leading inexorably to death. 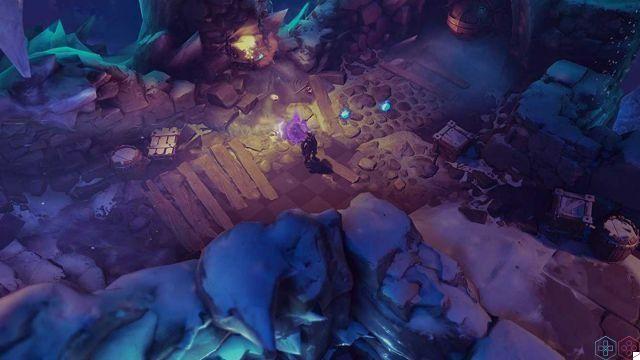 Another substantial difference with the old Darksiders is the story mode setting. First of all, having two of the four knights available, in the main menu it is possible to choose whether to play alone, in local multiplayer or online multiplayer. This pleasant novelty allows you to have fun with friends by completing the main campaign, or to get help from random players from all over the world.

While in the past the chapters of the story were activated by talking to the NPC scattered throughout the game world, in Darksiders: Genesis things have changed. The main character who will give us directions on the tasks to be performed is an old acquaintance of the fans: Vulgrim. After each mission, in fact, we will have to return to the Void, a kind of partially explorable hub where it is possible purchase upgrades sold by Vulgrim and Dis. From here, it's possible activate the missions of the main story, or re-explore the maps already unlocked during the campaign.

In total we are faced with 16 chapters before reaching the end of the game, with a total of 15 hours of play approximately. As already mentioned, the level design is brilliant and leads to the discovery of the new tools needed to solve environmental puzzles. These puzzles become more and more complex and force us to use gadgets by changing characters on the fly. This is unless, of course, you're playing co-op with a friend. 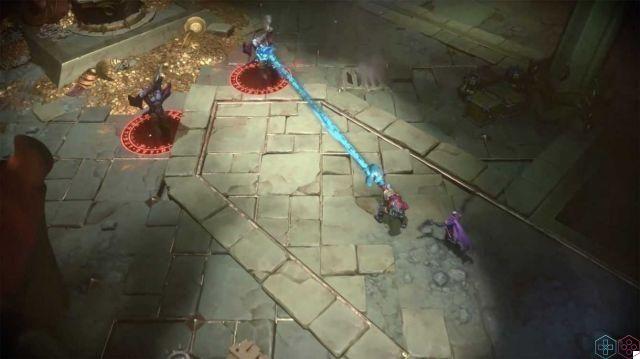 All That Glitters Is Not Gold - Review Darksiders: Genesis Nintendo Switch

The game, despite being rhythmic, fun and decidedly interesting, hides some small defects dictated both by the “technical” choices of the developers, and by the hardware possibilities of the Nintendo home console. In fact, this port for Switch, despite being perfectly successful and lending itself perfectly to the type of console, has some small mole.

The settings, which could have been better treated and enriched, are in some situations monotonous and bare as they are dispersive. Often, the sectors of some maps are very similar to each other, and this leads the player to retrace the same path several times or to get lost in the absence of well-defined reference points. The isometric view, although it is a functional and interesting choice, in some sessions is confusing and inaccurate, leading us inexorably to miss the bosses with the shots of the Conflict guns, or to miss the platform on duty falling on deaf ears.

Also on the technical level there is a little something to say. In some more excited sessions we find ourselves a victim of a few frame drops too many, as well as during some animations. In the more “graphically dense” scenes the console struggles a little, but all in all, nothing that precedes the gaming experience that much. The audio sector is completely different music, which shines for both soundtracks and sound design. Finally, although the story adds missing pieces to that of the knights, it turns out all in all not very exciting and the hasty finish leaves a bit with a bitter taste in the mouth. 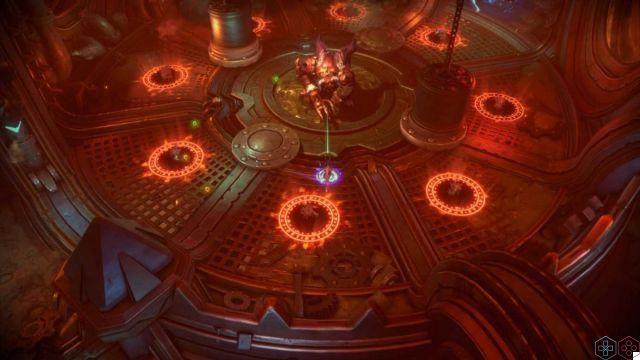 The Apocalypse has arrived

Darksiders: Genesis it is certainly an interesting title in the setting as well as in the choices made by the team. The isometric component makes it light and gives it an edge to be enjoyed on Switch. The choice of being able to play both War and Conflict works great, and adds a key mechanic to the game's entertainment and replayability.

However, some regret remains for what has been said about the story: we would have preferred that Airship Syndacate had written a story more interesting and in-depth. At the end of the joust, this chapter, in addition to clarifying some shadows on the history of Equilibrium and showing us what happened before the first game, does not contribute to either closing the story or giving key information about the knights and their personal history. Finally, the hasty and subdued finish leaves one with a bad taste for what might have been an even better title it's interesting.

In conclusion, we leave with the hope that the development team will take advantage of this new approach to work on a final chapter of the story. Maybe this time with an ending worthy of the franchise name.

As always, we invite you to stay updated on techigames for further news, updates and much more on the world of video games. Bye!

7.5 Not quite the end of the world, but almost!

Darksiders Genesis review: an adventure from another point of view ❯