Here is the review of Darkest Dungeon, the work that marks the debut of Red Hook Studios in the gaming market. If you are interested in the title, here we will let you understand what you will be dealing with

At the start of the game we will be greeted by a dark introductory movie, which immediately makes us understand the atmosphere of the title. Darkest Dungeon is a tough RPG with turn-based combat, roguelike elements and a strong Lovecraftian influence. Although it is not without flaws, this work managed to convince us abundantly and in the course of this review we will explain why.

The origins of the project

Darkest Dungeon was the launch game of Red Hook Studios, independent development team founded in the 2013 by Chris Bourassa and Tyler Sigman. The project was released on Kickstarter in 2014 and in no time managed to raise a whopping $ 313.337, compared to the $ 75.000 originally requested. A year later it was released on Steam in Early Access and finally completed on January 19, 2016.

The style of the game is really interesting and inspired, in every moment there is an air gothic and decadent that makes you feel completely immersed in this world both when you admire the corrupt landscapes of the village and when you are in the presence of horrible extra-planar creatures. The monstrosities that inhabit the game world are very varied and range from insane prophets to sprawling horrors worthy of a Lovecraft novel. Even the animations, as simple as they are, are very fluid and in general everything the technical side is flawless.

Il audio compartment it is equally well-finished, with engaging music and enveloping ambient sounds that vary according to the place where we are.

A special mention should be made toAncestor (voiced by Wayne June), who will play the role of the narrator throughout our adventure. His voice will accompany us at all times, commenting on our battles and narrating the events in an impeccable way. Although it may seem like a secondary element, the atmosphere of Darkest Dungeon would not have been the same without him. 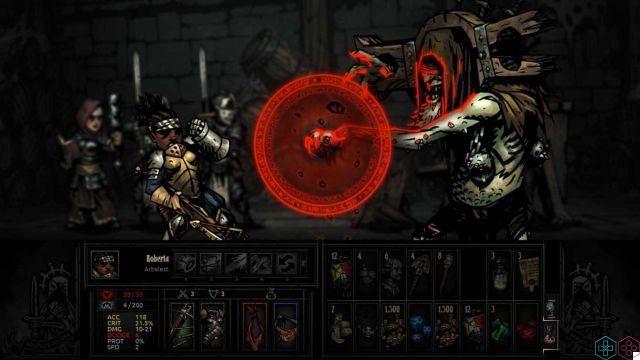 In Darkest Dungeon we play the role of the heir of a now dilapidated village who, with the help of a group of heroes we hired, will have to try to rebuild what was destroyed and drive away the terrible creatures that wreak havoc in the region.

Before leaving for a mission we will have the opportunity to equip ourselves inside the village. Here will be various structures that can be improved, with different functions, such as recruiting new heroes or relieving stress (which we will discuss in detail later). It will also be possible buy consumable items to take on missions, such as food, necessary for the sustenance of our adventurers, or torches. 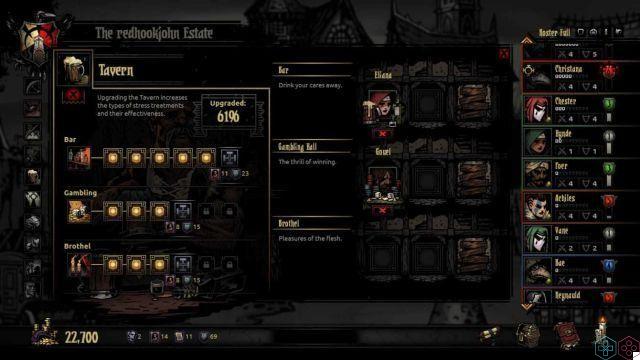 As we had previously mentioned, within the game there is a very particular mechanic which consists in the management of  STRESS. During expeditions, there are many things that can stress our heroes: whether it's the vision of something scary, the lack of light or an unsuccessful shot, the mental health of our characters will always be at risk.


If the stress reaches critical levels, you risk running into several afflictions, such as self-harm or paranoia, which will cause our peers to ignore commands and turn against each other. This state of mental instability can be alleviated by camping or by using one of the specific structures present in the village, but if it is ignored for too long it will risk causing a dangerous heart attack, able to leave our heroes on the verge of death. 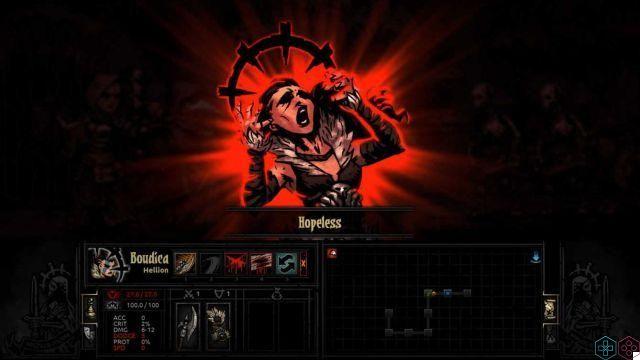 In the game we will control a party of four heroes which will move within randomly generated dungeons. These mazes will not be particularly detailed and in most cases will be composed of rooms connected by straight corridors, embellished with some interactable objects.

La composition of the group it will be essential for the success of our shipments. A poorly matched team will have a short life in the dungeon, so it is necessary to pay attention to the characteristics of each hero to be able to triumph. Furthermore, each character interacts with the world and with his companions in a different way, based on both his class and his traits. THE whether they can be both positive, such as stat bonuses, and negative, such as harmful behavior. These traits are assigned based on how our warriors interact with their surroundings.

I fighting follow the classic canons of turn-based games but are varied by an intelligent system of malus and altered status, as well as by the positioning of the characters. Both our heroes and enemies will be ordered in a specific formation and will be able to perform certain skills only if their position allows it. For example, a crusader will only be able to attack with her sword if she is in the front line and will only be able to hit enemies that are within her range, while a vestal will only be able to perform her long-range spells in the rear. There are also attacks that can change the position of the fighters and complicate things are also added corpses enemies, who will continue to occupy their position protecting the creatures behind them until we get rid of them. 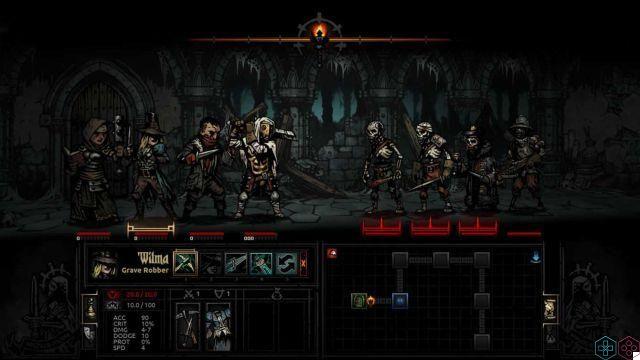 Darkest Dungeon is without a doubt a game difficult, defeat is just around the corner and it takes little to turn a successful expedition into a complete disaster. The death of the heroes is permanent and the chances of losing entire groups are very high. This punishing mechanic risks frustrating less experienced players and can upset even the most accustomed ones, since if we lose some high-ranking heroes we will be forced to recruit new ones and repeat low-level dungeons to upgrade them. This repetitiveness typical of roguelikes is appreciable in the first half of the game, but being forced to carry out initial missions when you have reached the endgame can be boring. 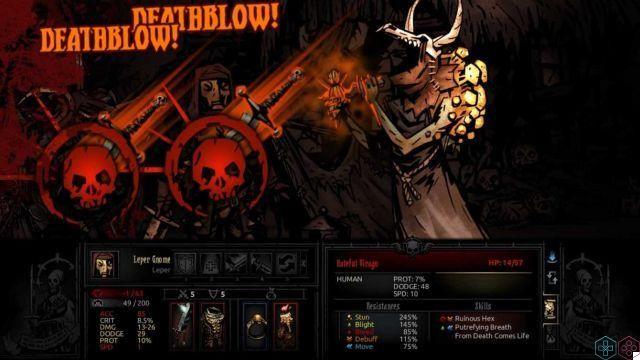 Players less accustomed to the genre may be put off by the difficulty of the work, but Darkest Dungeon remains a pearl. A game capable of giving, to those who are able to appreciate it, numerous emotions: joy and anger, terror and amazement, satisfaction and frustration. The title thanks to its solid gameplay, captivating style and great immersion has all the credentials to break into the hearts of the players and remain etched in the memory for a long time.

add a comment of Darkest Dungeon Review: Descent into Madness