Cyber ​​Shadow review: the future as it once was

Cyber ​​Shadow, the first work of Mechanical Head Studios, finally arrives on the shelves, offering us a tasty return to the past: let's find out in this review

It is no mystery that the last few years have been characterized by something of a cult for the past. Many of the most successful products of the last decade were born from the legacy of the great classics of the 80s and 90s. We come to think of masterpieces such as Divinity: Original Sin II, or the last two DooMs, which reproduce in a modern style the experience of the original chapter released in 1993. In the context of independent titles, of course, the phenomenon has almost become a practice. A lot can be produced with a minimal visual style, and a viable alternative to the mass market can be proposed focusing on ideas and intuitions, rather than on productive values.

Like many other things, however, the world of video games is also subject to change of fashions. If proposing a retro experience a few years ago could still seem like a breath of fresh air and a counter-current choice, in 2021 the release of yet another videogame inspired by the classics risks appearing almost cloying to the most. Indeed, some might say, it would be a twice old game. In our opinion, however, the philological love for pixels of the past continues to be a real one taking an ideological position towards large productions and there is still a need for works of this type.

In a world where indie titles are crushed by other indie titles, and no longer by big productions, the first work of Mechanical Head Studios would have passed over in silence, if the boys of Yacht Club Games (developers of the Shovel Knight series) had not decided to help the small studio in publishing the project. In the end, a certain amount of anticipation was created for Cyber ​​Shadow, which, as we will see in this review, has largely paid off.

After the media case of Cyberpunk 2077 - which attracted the attention of the general public well before its actual release - this type of setting has found more and more space within the market. Cyberpunk is one of the literary genres that most of all has managed to capturing the contradictions of the contemporary era and, in some cases, to anticipate the existential possibilities that right now we are finding ourselves living, at least in part, on our skin.

“We wanted new things to become thinkable, describable and perhaps even convincing,” said Bruce Sterling, one of the most well-known authors of the genre. Mechanical Head Studios succeeds in combining the push forward typical of stories such as Neuromancer or The Broken Matrix with an aesthetic and playful style reminiscent of old Super Nintendo games, and specifically the glorious Shadow Warrior (now also known to us as Ninja Gaiden). This is an apparent contradiction that makes us wonder if cyberpunk has really become just now a visual fascination suited to the masses, like a simple nostalgia for the eighties. Which, of course, would be truly cyberpunk; but perhaps it is not right to load the unaware Aarne Hunziker, author of the title in question, with this weight so great.

In this review we will see how Cyber ​​Shadow is a more than dignified action platformer, released perhaps at the least suitable moment to allow it to shine. 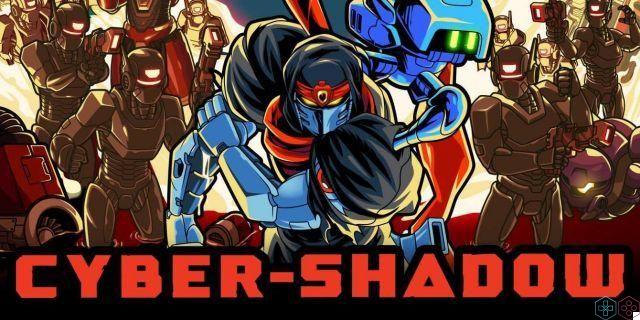 It is interesting to open the Cyber ​​Shadow review by analyzing yours simple narrative lines. The superficial level of the story is represented by the city of Mekacity and by the evil Dr. Progen, who took possession of it with an army of synthetic machines. The player will take on the role of Shadow, a ninja cyborg who is also the last remaining member of his clan. His task will be to save his own Mistress and defeat the antagonist and his henchmen.

The weave isn't exactly the most original, but unfolds along a series of static cutscenes that are very pleasant to see. The aesthetic style is the result of a very successful pixel art and an artistic direction that brings to mind a little Ninja Gaiden, a bit' Ghost In The Shell (especially the original, the colorful one designed by Masamune Shirow). Shadow, a mute hero, will have to make his way through hordes of cyborgs, gaining new powers and deepening the antagonist's reasons via terminals and dialogs.

It just seems to read a comic. Cyber ​​Shadow expresses itself with essentiality, without ever weighing down the action, at times reminiscent of a shonen manga. We enjoyed the pace of the story, just as we appreciated Hunziker's simple reflection on transhumanism.

Shadow, the last heir of his clan, will become stronger by meditating at some altars and passing some tests. In short, his real strength lies not in cybernetic enhancements, but in his nature as a warrior and as a human being. It is precisely the alternative worlds to be accessed through the aforementioned altars that represent some of the best moments of the title, both aesthetically and narratively. A bit like in Celeste, the difficulty of the title sometimes becomes a vehicle for diegetic meanings. And then it is easy to turn a blind eye to the revival of an aesthetic that has perhaps already had its day. 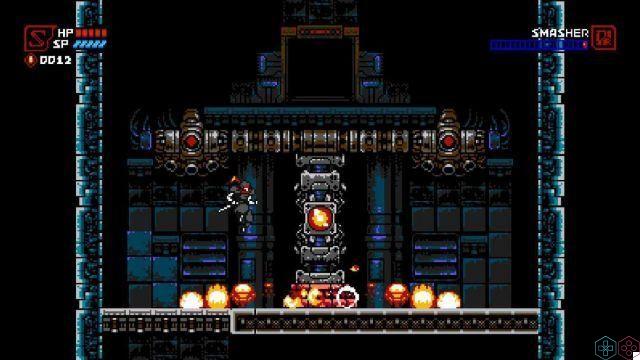 Cyber ​​Shadow gameplay is a Tribute to side scrolling action platformers which were all the rage in the late 80s. The controls are really simple and include a button for the attack and one for the jump, although over time we will unlock new skills that will require a few more combinations. Basically, therefore, we will not have to do is jump and shoot down enemies, without the possibility of ringing combos or enhancing our statistics.

Combining all this with the retro technical aspect, the feeling you get is that of playing a modern Ninja Gaiden. There is more attention to level design and the level of difficulty is immediately high, but not as bad as in Tecmo's evil title. At each checkpoint, in fact, we will be able to unlock temporary upgrades relegated to that specific area (they are not permanent, in short) that will give us a big hand in advancing.

We go from a barrier capable of absorbing the blows of the opponents to an aerial turret that will fight alongside us, up to a power sword and much more. Point management therefore becomes a fundamental choice in progression. Better to spend points now or save them for use at the next checkpoint? Everything will depend on how well we feel able to overcome a certain sequence. 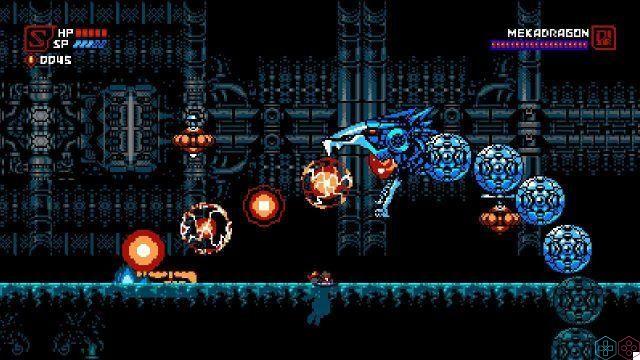 Cyber ​​Shadow, as anticipated, is really, really difficult, but more frustrating. You will die often, but you will always have an incentive to continue. This is especially noticeable during the beautiful bossfights, all diversified and stimulating. To proceed, you will need to concentrate and enter Zen mode. Calm and cool, for once, they will be really essential.

The last element of gameplay to analyze is represented by special skills and permanents that we will collect at specific times. Over time, Shadow will become more and more mobile, guaranteeing some variety to the gameplay. The repertoire is quite varied and includes both the classic consumable shuriken and, towards the end of the adventure, a graceful snap forward which reminded us a lot of the Megaman of capcomiana memoria. For all its about 8 hours of duration Cyber ​​Shadow is capable of entertaining the player putting it to the test, in short, reaching its main goal.

To tell the truth, there is one defect, and it is the only one: it is sometimes a little low responsiveness to commands. We're referring to the jump button, which sometimes takes a little too long to convert input into on-screen action, causing some unwarranted death. Wall climbing could also be handled better. Sometimes the protagonist will arbitrarily decide to throw himself down, compromising our game. It is a venial defect, which, however, it affects a lot in a game where precision is everything. 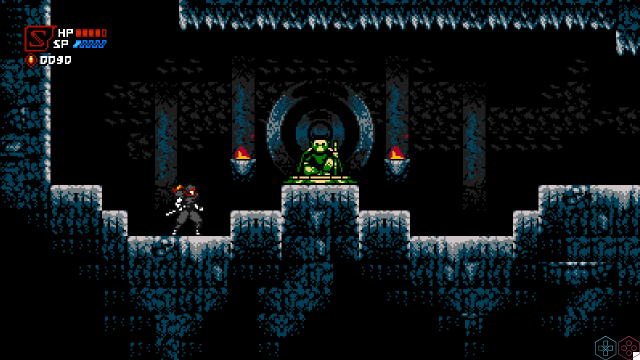 There is little to complain about the technical aspect of the Mechanical Head Studios title. Cyber ​​Shadow recreates the atmosphere of a Super Nintendo title thanks to a delightful pixel art style. It is not a very original choice, to be honest, even if the characters and the atmosphere denote a certain formal elegance. The cyberpunk aesthetic of the title is the somewhat superficial one that is the most popular these days: a nostalgic fascination, more than a complex vision of reality.

However, we appreciated the desire to reconstruct the appearance of a vintage title in an almost philological way. The feeling was that of leafing through a digital manuscript of the past, a bit like when you dig up those old game codes that have never been published to test them with an emulator. If the art style is just a simplification of the cyberpunk genre, his slightly naïve vocation it fits very well with the author's intentions.

Even the audio sector, after all, sparks the 80s from all pores and makes us run with our minds to that distant world made up of arcades and tokens to no end. One wonders how many of the people who will try the title have really lived that period on their skin. What matters is that the 8-bit melodies are really successful and will accompany you with great pleasure throughout the adventure. 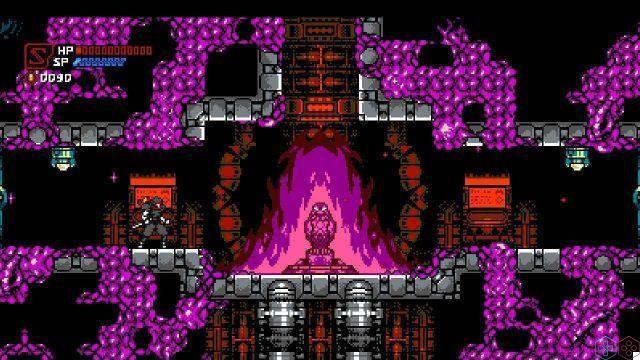 A jump in the past

At the end of the Cyber ​​Shadow review we can say that, paradoxically, the title of Mechanical Head Studios is just a child of its times. On the one hand, the almost childlike desire to reconstruct the atmospheres and dynamics of old titles in a modern game; on the other, an aesthetic that chases the fashion of cyberpunk in a sometimes superficial way, reducing it to pure visual fascination.

What matters is that the title presents a really successful gameplay, capable of engaging the player and gratifying him enormously once the many difficulties have been overcome. Too bad for some uncertainty in the commands related to platforming that undermine its effectiveness. All in all, however, we were very impressed with Aarne Hunziker's first work.

Have you played Cyber ​​Shadow? Let us know in the comments and stay with us for any news on the world of video games.

8 The shadow of the net

add a comment of Cyber ​​Shadow review: the future as it once was