The grand strategy genre has always been a thriving field of experiments and complex mechanics. The simulative method of these works has always been concerned with represent the complexity of political power in all its facets. The idea behind titles such as Europa Universalis or Victoria has always been that of create a vast network of lexical links between the elements of the game, where each variant ends up influencing an infinity of details.

Over the years, Paradox Interactive has proven to be a master at creating these kinds of experiences. At the cost of certainly reduced accessibility, the aforementioned series have always been able to guarantee a certain degree of satisfaction for anyone who has the patience and constancy to learn the dynamics. As we will see in this review, not even Crusader Kings 3, the latest addition, is an exception, while allowing the neophyte a softer approach to managing your mechanics.

Crusader Kings 3 represents the third installment in the series, but arrives several years after the second episode. This shouldn't come as a surprise to the inexperienced gamer: Paradox Entertainment's policy has always been that of update their titles over time. This will, predictably, involve the presence of numerous paid additions summarized in as many DLCs with a cost that is not always derisory.

As we will see, the grand strategy with a medieval setting does not present particular novelties in the formula compared to the definitive version of its predecessor, yet turns out to be a fundamental exit to carry on the idea of ​​the Swedish developers. In all likelihood, this time around we will see the release of several expansions, only we will start from a more solid foundation than in the past.

Even Crusader Kings 3, as we will see in this review, lends itself to continuous and constant support that, we are sure, will be respected by its creators. 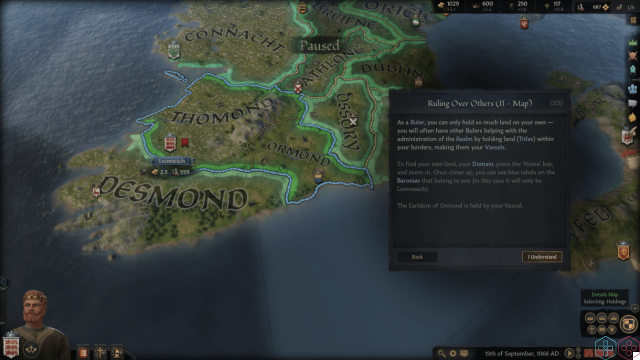 Separating the subjective experience from the objective one is practically impossible, in a review of Crusader Kings 3. Anyone who has tried one of the titles of the series, in fact, knows well what levels of unpredictability the simulation of the world can reach, with the right dose of intuition and goliardia. So don't worry, we will come to the story of the great dog Ciro dall'Uppland, but not before explaining to newcomers what this article is about.

In short: in Crusader Kings 3 you play as the ruler of a county, or a kingdom, and you will be responsible for managing any aspect of your possessions. You can choose a date that goes from 867 AD to 1066, and from there everything will be in your hands, carrying your dynasty forward from century to century. You will have to choose your advisors, maintain relationships with other rulers, decide when to go to war and against whom, what culture to impose on your people in more or less authoritarian ways, but also dedicate yourself to more frugal moments with your relatives and your children than they will succeed you to the throne.

Once a game has started, time will start running inexorably, bringing the world to evolve in an often unpredictable and absurd way. Crusader Kings 3 doesn't care too much about rewrite the course of history, allowing the player to accomplish chronologically impossible goals. Like, for example, conquering the entire peninsula with the County of Lecce - we are still working on this. The variants, however, are far too many to be taken into account here.

The title interface is really complex. The tutorial alone, for example, took us quite a bit of time trying to get to grips with the huge amount of technical terms introduced by the authors within the game. Mechanics such as Religion, War, the Vassalage system, Culture or Schemes are only a fraction of what the user will have to - or should - master to better manage their possession, which can also be expanded up to conquer the whole of Europe. 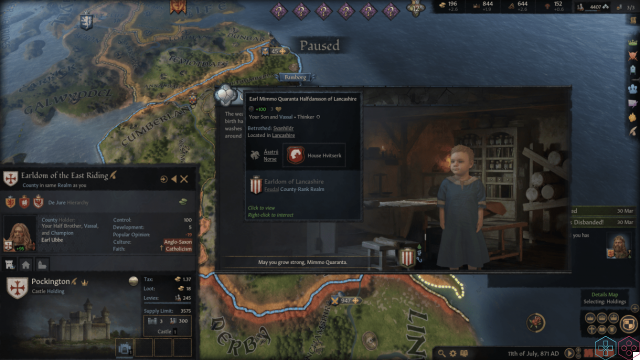 The huge amount of terms and names that the game uses to convey its message serves to specify the complex narrative power of a title that, apparently, could be mistaken for a software dedicated exclusively to entertainment and pastime. Obviously this is not the case.

Each character in the game, from the most powerful ruler to the most irrelevant courtier, will have a weight, albeit at times minuscule, on the evolution of events. This is why, when Religion becomes a mechanism through which to change history, converting entire peoples, there is a continuous exchange between meaning and signifier which acquires even more depth when the simulation value of Crusader Kings 3 is taken into account.

This semantic exchange is continuous and takes shape in gigantic events, such as the war between two peoples, or in smaller ones, as in the case of Ciro dall'Uppland, the dog received as a gift from one of the sovereigns we interpreted. Ciro, on the surface, should not have interfered too much in the complex political dynamics of the Swedish High Middle Ages. Yet when we decided to take him with us to the war councils and give him more freedom, the effects of his actions did not take long to be felt.

Ciro, in short, has become a little troublemaker, capable of spoiling the food in the pantry and annoying the countless characters who live in the court. One of them, a decidedly influential vassal, was so desperate about it by asking us to put a solution to this problem. Obviously, we took Ciro's defense. After all, it's just an animal, and there are much more important things to think about. Too bad that this has influenced our relations with the offended party, which he did not think twice before making an attempt on our life on behalf of the opponent.

Small and big stories like this follow each other relentlessly within a world in constant evolution, carrying on a systemic narrative that passes from the macroscopic to the microscopic with great elegance. All this, of course, it has a cost in terms of time and dedication on the part of the user, even if, as we will see shortly, Crusader Kings 3 isn't totally inept when it comes to helping newbies. 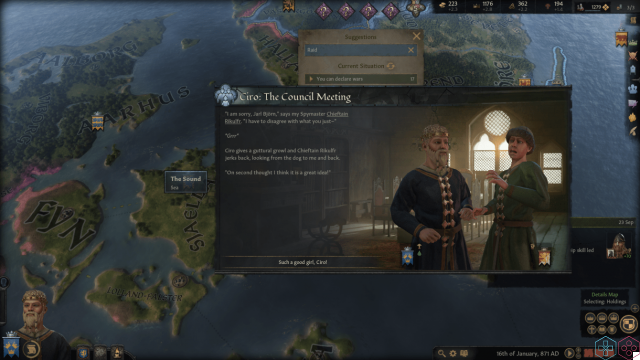 The possibility of starting with the recommended kingdoms divided according to the difficulty is a first step to become familiar with the game mechanics. Fortunately, other options are also adjustable in detail in such a way as to guarantee a smoother experience for less savvy players, without hindering the desire for challenge of diehard fans. It will be possible to adjust the passage of time, for example, rather than the difficulty of military clashes, or make life easier by reducing or eliminating the number of resources required for certain actions.

For those who have suffered greatly from the impassable wall represented by titles such as Europa Universalis IV, Crusader Kings 3 is almost a blessing. The ability to enjoy the title in a more relaxed and narrative way opens the door to a new type of experience that, in the past, was the prerogative of relatively few diehards. That's why, despite the many difficulties in mastering such a complex title and given its presence on the Game Pass platform, we warmly invite you to give Paradox new work a try. 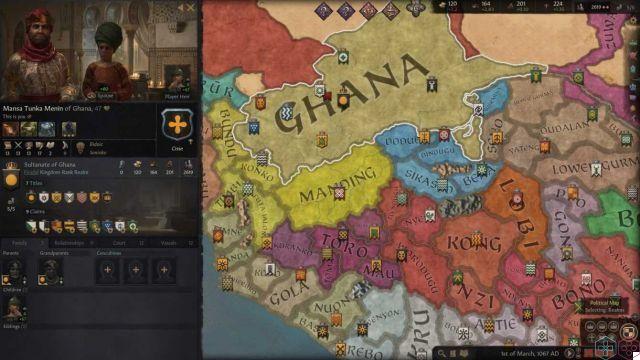 The technical sector has always represented an almost secondary element in terms of experience in titles like this one. Everything that happens on the screen is very often represented by static images and from the words present in the complex game interface - which will not fail to cause some headaches in the early days. The only polygonal models refer to the map of the world and the characters that will interact with us, but, as detailed as they are enough, it is clear that we are not talking about a work that makes graphic complexity its strong point.

The artistic direction sprang from the Middle Ages from every pore, as expected. Paradox has carried out a truly meticulous work of reconstruction and research, even if it is mostly textual and academic, rather than aesthetic. The menu and the interface, however, are very accurate in their appearance and are on the whole very pleasant to observe, together with the splendid illustrations that from time to time will mark the alternation of our kingdom. The sound sector is very positive, assisted by music of a certain depth with a purely cinematic flavor. 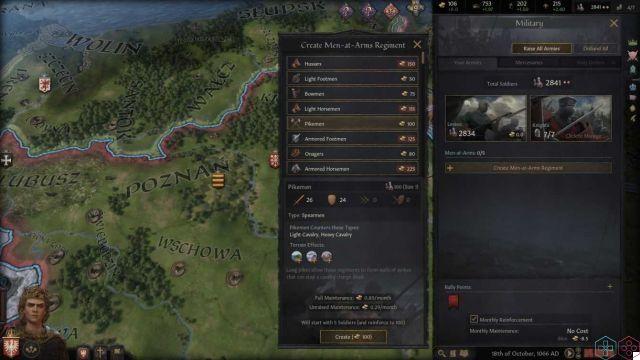 An infinite number of variations

Summarizing a complex title like Crusader Kings 3 in the few lines of this review is almost impossible. We tried, insisting on the more narrative and systemic character of the work Paradox and deliberately putting aside the explanation of the mechanics that constitute its foundations. Time and space simply weren't there, and the Swedish software house will continue to expand this platform over the years.

What we can tell you is that a similar experience deserves to be tried a priori, if only for its presence in the Game Pass catalog, which allows games like this to be downloaded even by those who, for fear or lack of money, would hardly have played them otherwise. THEThe value of Paradox Entertainment's work, however, is decidedly high and will surely delight grand strategy fans.

Have you tried Crusader Kings 3? Let us know in the comments and stay on the techigames pages if you want to know everything about the fantastic world of video games.

8.9 The simulation of a world

add a comment of Crusader Kings 3 Review: The Semantics of Power