Here is the Crash Team Racing: Nitro-Fueled review. Has this Remake really shown us quality in addition to the sense of nostalgia?

Twenty years have passed since the release of Crash Team Racing, the last title of N dedicated to Crash Bandicoot. This racing game then managed to convince critics and the public, establishing itself by right among the best exponents of the genre together with Mario Kart 64. After the enormous success obtained with the N. Sane Trilogy, Activision he wanted to seize the ball again by entrusting the Canadian team Beenox the development of Crash Team Racing: Nitro-Fueled. The project, announced during the last Game Awards, immediately proved to be more ambitious than the N. Sane Trilogy: we are talking about a real one Remake of CTR, despite the firm will to guarantee an authentic game experience to the original. With these premises the question arises spontaneously: will Crash Team Racing: Nitro-Fueled succeed in establishing itself again as the reference game of its genre?

The first real news of Crash Team Racing: Nitro-Fueled is related to the modernization of the graphic sector. Each polygonal model has been reworked from scratch, and the visual rendering is excellent from every point of view. The circuits are as beautiful to ride as they are to be admired: the developers have in fact enriched every single track with flora and fauna, creating a luxuriantly alive environment and made even more dynamic by the play of light and shadow that is reflected in the course of our race. The more attentive eyes will notice how numerous references to the levels of the original trilogy are now present in the scenario: for example in Canyon Dingo we will be able to see the signs of the desert levels on the motorcycle of Crash Bandicoot: Warped, or again in Sewer Track we will notice the shady henchmen of pinstripe coming from the first chapter. The graphic sector also revives the appearance and characterization of our riders: indeed Beenox has introduced, compared to the original game, a varied animation system which, combined with a brazenly detailed design, gives personality and bite to the gaming experience. The sound compartment turns out to be particularly accurate: as for the Spyro Reignited Trilogy, it will be possible to choose two versions of the soundtrack between the classic and the revisited one. In addition, the game is fully localized in Spanish, with a well-made dubbing that will make us remember the historical phrases of the runners of the original game!


As regards the technical sector, the game has a frame rate fisso a 30 FPS on all consoles (PS4, Xbox One, Nintendo Switch). Although this may be a limitation, compared to the 60 FPS standards of current driving games, the gaming experience remains dynamic and frenetic thanks to the stability of the frame rate and above all the depth of the gameplay, which we will discuss later. We conclude the technical analysis by reporting that, on PlayStation 4 e Xbox One, the resolution is 1080p; while on PlayStation 4 Pro (the console we use) e Xbox One X increases the 1440p, ensuring specific compatibility for displays in 4K.

This game delivers four main modes: Adventure, Arcade, Time Trials and, as an absolute novelty, Online. The Adventure mode retraces the same events as the original game: the planet Earth is invaded by Nitros Oxide, who decides to challenge its inhabitants for the title of fastest racer in the galaxy so that, by winning, he can transform the planet into a large parking lot. Our character will then have to move between 5 areas and win trophies, to beat the singles boss of each area (presented with delicious cutscenes) and get the keys necessary to access the final challenge against Nitros Oxide, and also earn crystals, relics e gem to aim for the completion of the game. In Crash Team Racing: Nitro-Fueled we will have the possibility to choose to play theAdventure in 2 different ways: the Classic mode, analogous to the original game, and the Nitro-Fueled mode which instead will allow us to: customize our karts, modify our racers and select 3 different difficulty levels. In this regard, it is important to underline that the AI ​​is decidedly more aggressive and faster, making the level of the races highly competitive.


La Online mode represents the true innovation of CTR: Nitro-Fueled and at present it allows you to carry out races and battles, randomly or through a private session with your friends. During our test we found the network infrastructure to be quite stable, running races almost always in the absence of problems. We expect an important evolution towards this modality in the future, given that Beenox has already announced the arrival ofGrand Prix event, which will allow you to access exclusive content for a limited time. We conclude by making an honorable mention at local multiplayer mode, which are fluid and stable without having to give up any technical compromise: we participated in sessions of competitions and battles, from 2 to 4 players, which have always proved to be fun and full of twists, making us "travel with the heart" to times of the first PlayStation.

Another fundamental aspect of this game is the large amount of content, in fact there are: all Crash Team Racing and Crash Nitro Kart circuits for a total of 32 tracks (the Retro Stadium is exclusively on PlayStation 4); all characters from CTR and CNK, which you can unlock by reading our guide, and new characters arriving in the coming weeks; customizations of the riders (skins) and of the vehicles (frames, wheels, stickers and paints). The customizations represent a novelty compared to the 2 previous chapters, and can be unlocked both through progression during the game and also through a special area, called Pit Stop, with the use of Wumpa Coin, or coins that can be obtained above all through online competitions. THE usable characters instead they are classified in three major categories: Beginner, Intermediate and e Advanced. The classification is made on the basis of the balance of three main statistics: Speed, Acceleration e Steering. The simpler characters to use will be able to count, for example, on high steering, while the more difficult ones on speed: the learning curve increases when you start playing with the Beginner, then moving on to Intermediate and and then to Advanced once the techniques have been assimilated. 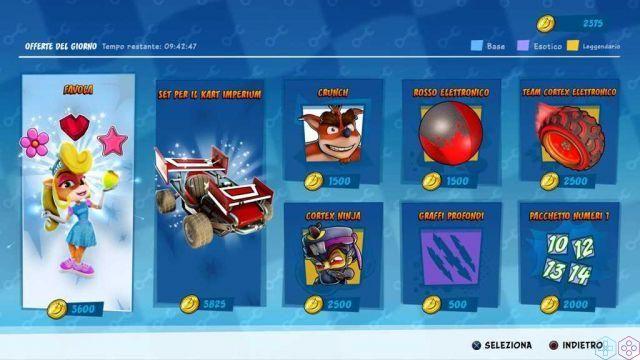 The Pit Stop area, which allows you to unlock cosmetics and characters using Wumpa Coin.

As mentioned above, to make the experience of CTR: Nitro-Fueled is the depth of the gameplay. Beenox he wanted to reproduce this aspect in an authentic way because it is still anchored to solid certainties. In detail the kart control system can rely on three important aspects to master: the turbo, jump and skid. The latter will allow us to better cover any point of the route (you can know the shortcuts reading our guide) and to increase our speed: in fact, once in a skid, we will be able to chain up to three turbos to obtain an important speed boost. But not only that: by repeating this technique several times during the race we will be able to accumulate the so-called "Reserves", that is, charges of maximum speed that can be released and kept constant for several seconds. Compared to the original game, at high speeds we will be able to keep our kart soaring and continue to drift from one direction to another with greater fluidity; furthermore, the jump has become more decisive during the race. Recall that it is in Adventure mode that during the game uploads, it will be possible to know the techniques thanks to some valuable advice.

While maintaining in general the same conformation of the original layouts, on the front of the level design Beenox wanted to modify the surface of the paths of Crash Nitro Kart, eliminating the "antigravity" sections: this is to be considered an advantage given that, although suggestive, these sections dramatically reduced the rhythm of the game. Vicarious Visions. Finally numerous glitches have been eliminated, ensuring that only the shortcuts that were conceived during the development of the game can be taken. The gameplay it is also influenced by the possibility, once the crates are hit, to use some objects to our advantage during the race: we talk about defensive objects (TNT), hybrid objects (such as beckers and spheres) up to devastating offensive objects such as homing missiles, alarm clocks and orbs of electricity. It is therefore important to set up the right tactic based also on the use of the objects and the gathering of wumpa fruits, since with 10 of them it will be possible to increase the speed of the kart and enhance your object. The only drawback to report is the presence of some sudden collision with the environment and game objects, which can certainly be resolved thanks to the next updates.

We have come to the end of our review of Crash Team Racing: Nitro-Fueled and now we are able to answer the original question. The answer is yes: CTR is once again a reference game in competitive racing games, and it does so by fully convincing from all points of view, through one renewed graphics it's a gameplay as accessible as it is difficult to master. All accompanied by ahuge amount of content, usable through numerous modes both in single and in local and online multiplayer, and served to a unbeatable budget price. Crash Team Racing: Nitro-Fueled it's a must-buy, guaranteeing a potentially infinite longevity and making it an ideal game for any situation: whether it's a game on the fly or an evening with friends.