It took a full year to port to the Nintendo Switch, but it took many, many more years before Crash Bandicoot came back to charge on a Nintendo console. The most famous marsupial in the world becomes portable, at the price of some compromise to make the conversion

Crash Bandicoot is a franchise clearly linked to PlayStation, although many spin-offs over the years have also landed elsewhere. The first three platformers, perhaps not perfect but certainly linked to the most intimate and sometimes violent memories of our childhood, have literally made the history of the platform genre. A genre that twenty years ago enjoyed perfect health, and whose maximum exponent was perhaps not even Crash Bandicoot as much as Super Mario 64, but that's another story. We are here to tell you about the Crash Bandicoot N. Sane Trilogy, which last summer marked the return of the marsupial, in fully remastered form, to PlayStation 4. It took an extra year of work, but that same restoration work has now managed to get everywhere: on PC, on Xbox One and especially on Nintendo Switch.

Activision has worked hard on conversions, and after trying it for a long time we are sure that it was the one for the Nintendo Switch that created the most problems of all, because it was able to require the most compromises from the developers. Not bad: Activision did it. And if you are one of the lucky owners of the Kyoto House hybrid console, you might be seriously interested in bringing the most famous marsupial in the world of video games with you under the umbrella this summer. You wouldn't hurt too much either, because Crash Bandicoot N. Sane Trilogy on Nintendo Switch is perhaps a little limited, but enjoyable and fun.

Crash Bandicoot N. Sane Trilogy it is the perfect package for both nostalgic people who at the time have gutted the first three chapters of the series on PlayStation 1 and for newcomers who have never seen (but is it possible?) the Sony Marsupial. The Activision remake, developed by Visceral Game, contains the first three episodes of the series, the original ones: Crash Bandicoot, Crash Bandicoot 2 The Wrath of Cortex and Crash Bandicoot 3: Wharped. It is about three video games that somehow feel the weight of the years, although they are enjoyable and fun quietly even nowadays: two-dimensional scrolling levels or deep corridors, fruits to collect, crates to destroy and enemies on which to jump on your head or eliminate with funny turns represent the heart of the franchise. The plot is clearly a mere narrative pretext to unleash the imagination between levels that are very different from each other on a thematic and content level: Doctor Cortex is a mad scientist who has carried out some experiments on the Bandicoot, little-known marsupials of equatorial latitudes. Crash is one of his experiments, he broke free, and now he rebels against his creator in an attempt to save his girlfriend. We also told you that it was a mere pretext ... 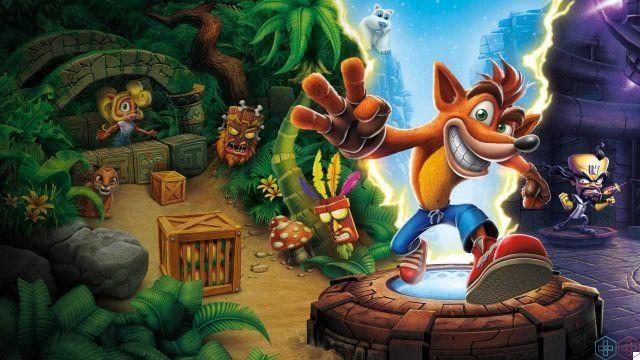 The formula of the series has remained faithful over the years, despite being enhanced in more than one aspect, and you can see it as you move from one title to another within the Crash Bandicoot N. Sane Trilogy: the short, extremely frustrating and punishing levels, and even less defined than the first chapter give way to ever deeper care and attention in The Wrath of Cortex, fully upgraded later in Crash Bandicoot 3: Wharped, which offers, among other things, other types of weapons, characters and game modes. This is the crescendo of a historical series, which all newcomers and nostalgics can rediscover with the first times and their own pace, now comfortably under the umbrella of their own bathing establishment. Why yes, Crash Bandicoot N. Sane Trilogy on Nintendo Switch has little more to say than last year's PlayStation 4 version: but that little is also extremely interesting. We have in our hands a fully playable version in portability, and also some additional levels.

Su Nintendo Switch Crash Bandicoot N. Sane Trilogy comes to life again, if it needs it. The new version of the title has been optimized for new arrivals: on Xbox One and Xbox One X it enjoys greater graphics power, on PC it reaches 60 FPS, and finally there is the Nintendo Switch version which boasts portability as a peculiar value. . A portability that arrives, it is unfortunately necessary to underline it, at the price of numerous sacrifices: so begin the graphic details, considerably lower, like the graphics for their own sake, to those present on all the other counterparts. From the point of view of the frame rate, however, there are no noticeable drops: the title maintains a firm anchor at 30FPS even in agitated situations, a symptom that at least a minimum is important for Activision to work on the conversion.

On the value of the artistic direction itself, we would return to bore you with what we already thought at the time of the PS4 version of Crash Bandicoot: the restoration work, and here we are dealing with a real remake, not a remaster, it is exceptional. Movies, levels, characters, starting with the most insane marsupial in the world of video games, have been recreated in an incredibly faithful way to the original episodes for PS1, and it's a good thing because otherwise the historical fans of the series would have taken it out on the restorers themselves. .

Crash Bandicoot N. Sane Trilogy is, even on Nintendo Switch, an absolutely valid title to add to your videogame collection. If you have already purchased it on PlayStation 4 and you are not interested in carrying it around, obviously the purchase must be duly weighted; the same goes if you prefer 60FPS and considerably higher graphic detail to comfort, especially on PC. The Nintendo Switch version of the game, however, is more than decent, and squeezes as far as the available hardware reaches, perhaps with a tiny hint of superficiality on the part of Activision, which could have perfected the optimization of the product even more.

7.5 And now let's go back to dreaming of Crash Bandicoot 4!

Creepy Road Review: On the way to a mad apocalypse ❯