A split society, crazy AI and crazy cyberpunk deliveries. This is Cloudpunk, let's find out if it convinced us in our review!

After several months from the PC release, Cloudpunk also lands on Xbox One, Nintendo Switch and PS4. The ION LANDS team tries to satisfy gamers' desire for cyberpunk, in a period in which the genre is coming back strongly in the limelight, just think of Cyberpunk 2077. Let's analyze in detail the success of the port on console and try to understand if the game has managed to convince us. Let's not waste any more time and let's get started with the Cloudpunk review. 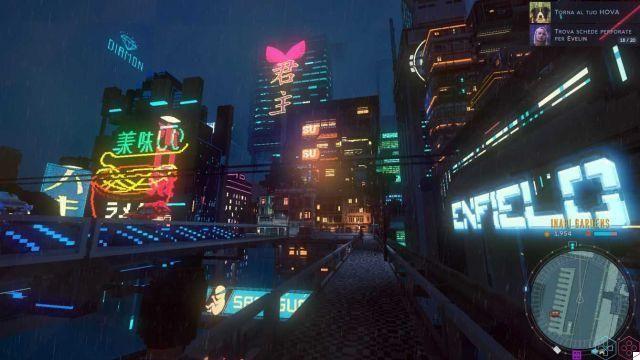 Nivalis is an oppressive city, able to saturate the senses with its neon lights and advertisements everywhere, drowning citizens in a rain that never stops falling. Rania, who moved from the Eastern Peninsula, works with the delivery company Cloudpunk, which gives the title to the game analyzed in the review. This is how a series of events are triggered that will lead the protagonist to know the Nivalis rot that rises more and more to the surface.

The first impact with the game is the same as Rania has with the city. We find ourselves overwhelmed by the stimuli present everywhere in Nivalis. The atmospheres recreated by ION LANDS manage to immerse us immediately in the cyberpunk dystopia thanks to a wise use of lights and soundtrack. Cloudpunk captures you immediately and pushes you to continue, intrigued by the characters and paradoxical situations that are on the agenda at Nivalis.

The open map is full of indicators with different activities: street shops, various objects and food retailers are everywhere. The feeling is that of being in front of an open world that will expand dramatically the possibilities given to the player. But appearances can sometimes be deceiving. 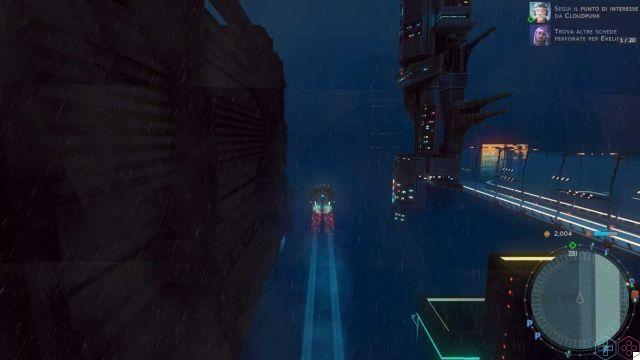 Unfortunately, after a few hours something breaks. The play structure of the game begins to be clear and the true nature of Cloudpunk is revealed. The game consists in going from point A to point B, completing the tasks that will be assigned to us. All secondary activities are absolutely useless for gameplay purposes, which is based solely on moving in your vehicle without any additional mechanics. The objects to be purchased are of no use, just as it is useless to buy food to consume.

Cloudpunk is comparable to a modern graphic adventure (the so-called "walking simulator"), with the only difference that in this case we will mostly be aboard a vehicle. There are side missions that go deeper into the lives, if they can be defined as such, of the inhabitants of the suburbs of Nivalis. As interesting as they are though they in no way bring some of that crisp gameplay that Cloudpunk desperately needs. 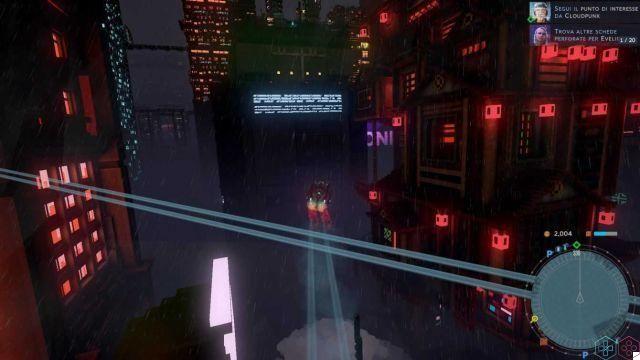 The story is not enough - Cloudpunk Review

In the absence of any playful component, Cloudpunk is based solely on the atmosphere and narration. The latter cannot be said to be unpleasant: some characters are well characterized in minutes and the plot is quite engaging. Classic cyberpunk themes such as social inequality or the identification of consciousness are treated in an interesting way. Rania will find herself embroiled in everyday situations for any courier like her, but reported to the absurd in the crazy future put into play by the software house.

On this front we find the biggest flaw in the dialogues, all dubbed in English with Spanish subtitles, who sometimes suffer from excessive length which slows down the pace of advancement. That feeling of freedom that you get in the early hours soon fades away. During the missions we will be faced with some moral choices, which have no effect on the plot. Once this is realized, the hold on the player vanishes and Cloudpunk suddenly loses that charm that would conquer any fan of the genre. 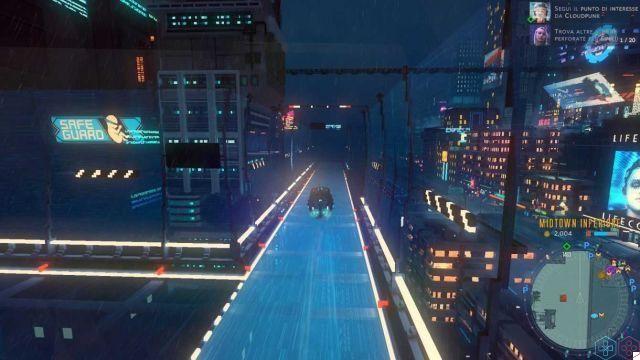 From an aesthetic point of view Cloudpunk is certainly successful. Through a great use of voxel art ION LANDS has managed to build an oppressive and dark city. The software house has managed to make a virtue of necessity, using the limited field of vision to accentuate that feeling of being caged that the citizens of Nivalis are so familiar with. Nonetheless, we are faced with a raw product.

On the base PS4, version tested in the review, Cloudpunk suffers from fluctuating performance, especially in the sessions on board vehicles. The frame rate is often below 30 fps, with some sporadic freezes when loading a portion of the map. The handling of the hitboxes is rather imprecise and the animations of the protagonist when using the third-person camera are sketchy. This lack of technical care it dirties the gaming experience as a whole, despite a successful glance. 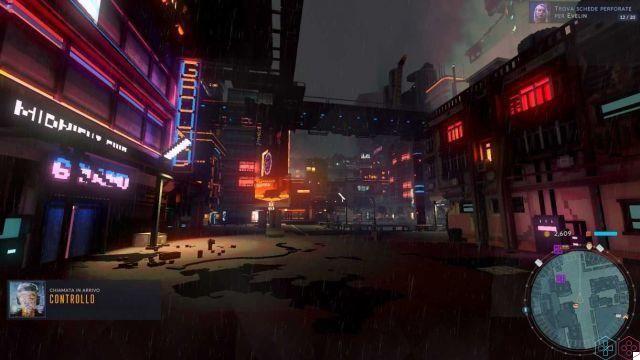 More could be done

A discreet story and an excellently constructed atmosphere they are not enough to reach sufficiency. The lack of structured gameplay is felt more and more over the course of the 9 hours it takes to see the credits. Much of the possibilities given to the player have no purpose, be it moral choices or map exploration. The magic of a dirty and violent cyberpunk world soon fades and there remains only the curiosity to see how the plot ends.

It's not all to throw away, an enthusiast of the genre could however be conquered by the indisputable charm of Nivalis. We also feel we can recommend the game to anyone who is ready to completely sacrifice gameplay to experience a very long interactive story. Too bad, however, for the performance and for a technical sector that is not always excellent in the tested version. Cloudpunk's review ends here. The game is available now on PC, PS4, Xbox One and Nintendo Switch. Let us know what your opinion is on the game and keep following us on the techigames pages to stay up to date on all the news from the world of video games and more!

5 Lots of deliveries and little else