City of Brass is a rogue-like that will give satisfactions to the most hardcore players, but that suffers from some limitations: let's see what it is in our review

The world of rogue-like (but also rogue-lite) has been experiencing for several years a moment that, if not golden, we could still define positive. Hand in hand with the birth of a strong indie culture, a rogue-like culture has developed dictated both by fashion (in a positive sense) and by necessity. For small development teams, creating a rogue-like means being able to produce as long-lived content as possible, with as little effort as possible. Obviously it's not that easy to be original and it is not so easy to make randomness create real variety.

City of Brass, Uppercut Games' first-person rogue-like, can only solve one of these two problems. 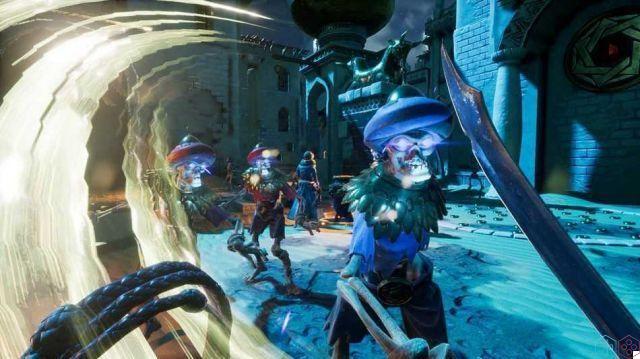 City of Brass: One Thousand and One Nights | Review

We are an indefinite adventurer, a brigand in search of sumptuous loot, and we awaken a cursed city, buried in the desert since time immemorial. The streets are full of the undead, greed has destroyed everything and geniuses are rampant with their magic. We throw ourselves into the alleys and halls of a nightmare Agrabah, hoping to get out alive.

Leaving aside the narrative incipit, City of Brass is divided into four areas, with three levels each: at the end of each area we will have to defeat a (fixed) boss to be able to move on to the next one. Level by level, randomly generated, we will have to find the exit before time runs out and without letting go of our pens. To survive the enemies we will have a not too effective sword, useful for beating a couple of blows, and the multipurpose whip. With the latter we will be able to hit the weak points of the opponents to stun or disarm them, we can also attract them towards us or push them away.

The real usefulness of the whip is manifested in combination with one of the basic elements of the game: the presence of traps. Spears sticking out of the ground, doors that close treacherously, hidden blades: each area of ​​the game has its own contraptions, as well as its own enemies. Especially at the higher difficulty levels, it will be essential to exploit the environment to come out victorious, causing the undead to fall into traps. To these, are added the throwing objects (vases, bombs, oil lanterns ...) that allow you to hit enemies from a distance, inflicting a lot of damage.

City of Brass: the hard life of the beggar | Review

The environment is the real center of the game: a stimulating choice that gives satisfaction to players interested in a hardcore challenge and a minimum of reasoned. The game, in fact, aims at a medium-high difficulty level: however, it is necessary to explain it well.

City of Brass has a scalable difficulty but does not offer the classics "easy", "normal" or "difficult". The work of Uppercut Games chose a particular and commendable road: at each of our games we will be able to activate modifiers, blessings or charges that will change some specific game elements. We will be able to double our life, or totally cancel the time limit of the levels or, on the contrary, we will be able to increase the number of traps or enhance the attack of the enemies. We will have about twenty modifiers to play with to create the level of difficulty that suits us best. Even the less hardcore, therefore, will be able to try their hand at the challenges of City of Brass, but at the same time the game gives real satisfaction only to those who are not satisfied with an easy victory. In addition, there is a global leaderboard that will encourage the most competitive players to compete for the best.


Lowering the difficulty level means being right about enemies, traps and bosses (altogether uninteresting, by the way) with discreet simplicity and, in very few games, we will have seen everything the game has to offer. The work also offers enhancements for the character (valid only for the current game) but even these are not many and do not change the core of the game too much: a clearly reasoned choice in order not to deconcentrate the player from the hardcore core. (i.e. the aforementioned environmental management), but at the same time it is undeniable that between one match and another there will never be much difference. 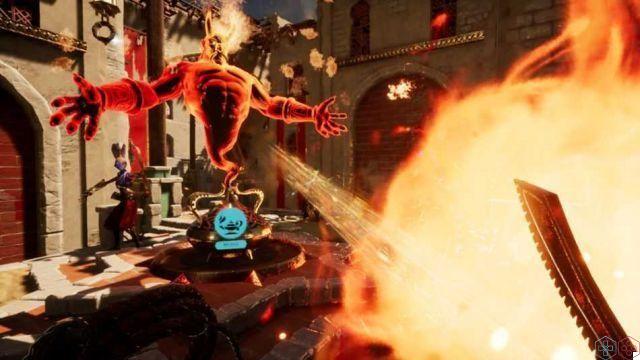 In any case, our goal must not only be to survive, but also to accumulate loot: by collecting precious objects and opening chests, we will earn a useful currency to request the favors of various geniuses that we will meet in the levels. We will have a vendor (which allows us to purchase the aforementioned upgrades) or a curator or even a genius who deactivates the traps for the current level. There are about ten in total. The really interesting thing, though, is that we will have three wishes to spend on each run to upgrade genes: the vendor will showcase rarer items, the curator will fill four hearts instead of one, and so on. A light tactical touch is not unpleasant, although we will soon realize that there are few geniuses to whom it makes sense to assign a wish.

City of Brass is a true rogue-like e does not propose any progression system. Not only is there no possibility to upgrade the character between runs (mechanics which is more rogue-lite, for the record), but advancing in the game does not unlock new upgrades. At least, the visual variety is good: each area of ​​the game has its own aesthetic proposed, always randomly, in a night version or a day version. Overall, City of Brass is technically very good, also considering its indie nature. The sound is valid, thanks to the environmental effects of a "city of the desert" and the verses played by the enemies that allow you to sense the presence of a threat off the screen and to react accordingly.

Unfortunately responsiveness is not the best with the controller: the game requires a certain precision and speed; the levers are not the best solution in this case and to create some problems there is also the auto-aim. Fortunately, the developers have updated the game and added the ability to reduce the strength of auto-aim. Our review is based on the PlayStation 4 version of the game, but if you can choose, we would like to recommend the PC version in order to use the mouse.

In conclusion, City of Brass is a game with a certain originality (for the setting and for the main mechanics), excellent for the more hardcore players but which suffers from lack of content and, in the console version, some limitations in the system. check.

Civilization VI review: we played it for you ❯