Cars 3: In Race for Victory is a video game that really lends itself to all ages. If you believe that video games of the genre are to be considered only for children or teenagers still in their teens, you are just off the road!

Cars 3: Race for Victory it is suitable for all players who want fun, lightness and many hours of gameplay. But it is also suitable for perfectionists, trophy hunters and families. In a nutshell Cars 3 fits (almost) to every kind of gamer.

If you believe that Cars 3 is a video game that takes weight on some section of the animated film of the same name and tells a parallel story, I'm sorry to disappoint you. The strength of Cars 3 is fun, naked and raw. The variety of things you can do in this signed video game Avalanche Studios it is disarming, and capable of making many of today's productions pale. Within this video game there are a disproportionate number of tracks and a respectable car roster, all seasoned with the charisma of the title characters Pixar. 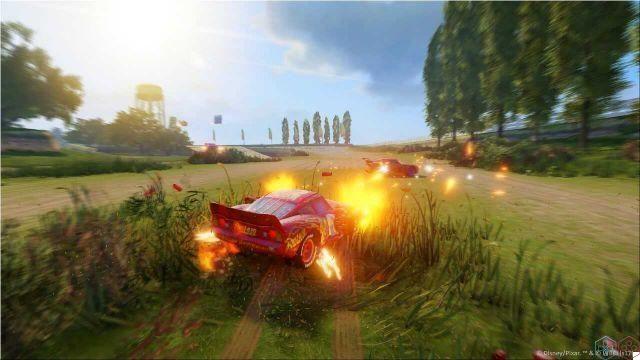 Impossible races, shortcuts and modes of quantity and quality are the strength of Cars 3: In Race for Victory

Fun in Cars 3 is guaranteed for everyone. But how? The answer probably lies in the simplicity with which the mechanics are mixed we are used to in racing games. To make a car video game work well (even if it is always about cars in cartoon) you need to correctly dose three fundamental elements: variety, methods and personalization.

Let's start by talking about the available tracks. We will have available more than twenty tracks that will be unlocked only when certain objectives are reached, all well-studied and fun. We will have themed tracks, such as the Spanish or English track, easily recognizable by the settings or elements on the screen. For example in the track dedicated to Great Britain, we will find elements such as double-decker buses that will whiz by and in all probability will make us capitulate.


Tracks always have something to say in Cars 3

In each Cars 3 circuit there will be themed “disturbing” elements. Tractors on the fields, monster trucks in the part of the circuit dedicated to Destruction Derby-style races. In short, the elements ready to make you lose positions will be around every corner. Obviously, as mentioned before, the tracks will be scattered everywhere with more or less accessible and practicable shortcuts. These tricks will allow you to get back in the lead of the race or to make a bad impression, if you are unable to cross the bridge in its entirety or do not jump at the right time.

We are faced with colorful, fun circuits and masters of a truly high level level design and game design. In addition, in order to master we will have "weapons" at our service: such as the skid, essential to get out of a curve or the turbo, which will allow us to sprint at super speed in front of the group in the race. To recharge the turbo it will be enough to head and tail or drift on designated parts of the map. If it still doesn't seem enough, know that you will be able to take a seat along the race. 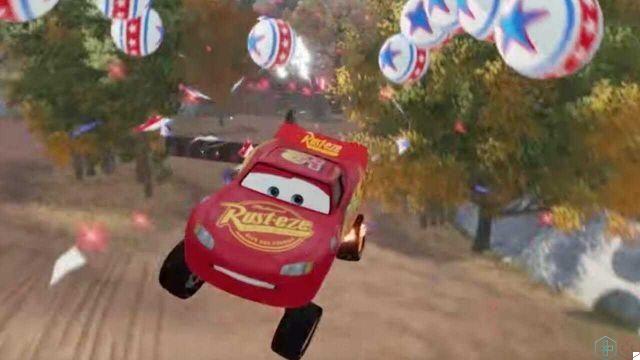 The modes featured in Cars 3 won't let you get bored!

The game modes will split into Events, Cups, Team game, Acrobatic track e Hall of fame. In Events we will be able to find further sub-modes (six of them).

The customizations will be purely aesthetic, but they are still a welcome "plus". Being able to change the color of the flames originating from the turbo, the noise of the horn or the color of the neon lights of our car, are things that are always pleasant and give the player a possibility of customization. 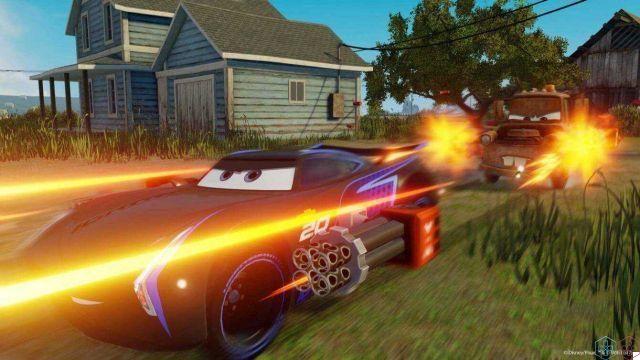 The first proposed game mode, as listed above, is Events. Inside we will find several sub-categories that can offer fun for every palate.

The first is the Race mode, which is the most classic of the races. Ten cars on the track and the possibility of receiving from one to three stars based on the finish position. Even if it might seem the most boring mode as it is actually a simple race, the tracks with the peculiarities expressed above (shortcuts to be learned by force to compete and disturbing elements) will take care of it to make the races fun and exciting. The desire to finish first at all costs will be a real condemnation it will imprison you in the same track over and over again, perhaps with different cars hoping to beat your opponents.

The second section is Car Challenge

If you are tired of competing correctly, you can enter this mode where to win you have to get on the podium, but the way in which you have to gain or defend positions changes. In this mode of Cars 3 you will have to use weapons that will make your opponents regress. The weapons will be divided into oil stains, guided missiles, bombs and mines.

In a nutshell, the mode is reminiscent of the famous Mario Kart, but don't think it's a bad copy of the Nintendo game. The phrases of the characters, the structure of the tracks and the weapons available will be valid characteristics to distinguish themselves from similar video games.

The stunt show. A nice way to lose sleep!

While I loved all of the game modes, this is definitely my favorite. Take the slopes that I have already made you understand you appreciate, add ramps and colored balls, which once burst will give you points. Then add a series of evolutions that you can alternate and chain together to reach higher scores (hoping not to crash to the ground before the car is back in position) and you will have a damn fun mode.

Another lap, another race, Elimination and Challenge to the best lap

I have decided to group these two modes as there is not much to say.

Elimination is a sort of automotive challenge, only instead of having the usual adversaries as targets we would have hordes of "minions" to be destroyed with rockets and bombs.

As for the Challenge to the Best Lap mode, the name speaks for itself, you will compete on the track and try to set the best time to win.

Last but not least is the Challenge for the Experts

The last mode is very interesting as it will put you to compete in a race where there is the possibility (by beating the opponent) to unlock unique characters for your collection. Unique, thrilling races with phrases from the protagonists that can make you double up with laughter. 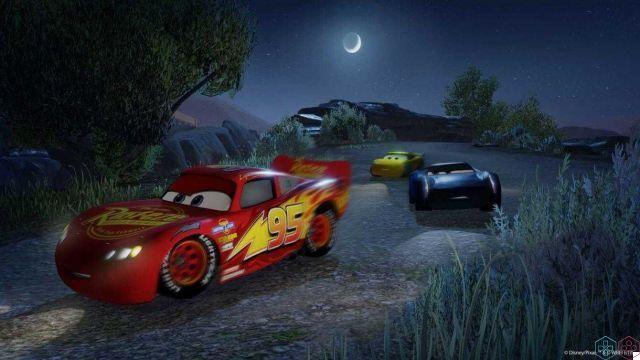 Cars 3: In the race for victory is a purely arcade title but not for this to be underestimated. Describing it as a title suitable only for children would be a very serious mistake.

Video games like this are able to make people understand how important stratification is in a production. This video game can be played absolutely by a user of tender age, but even a "seasoned" gamer can try his hand at challenges capable of keeping the level of fun high.

Seeking and achieving perfection in every single event will sooner or later become a matter of stubbornness. So prepare your fries and a drink, the Cars 3 show has rolled off the big screens to hit your consoles!

add a comment of Cars 3 Review: Race for Victory