Learn the rules of the game by reading Caper's review and become a skilled thief like Lupine III, scoring unprecedented thefts

Today we are talking about another strategic game from Jumbo, also distributed in Spain by GateOnGames. The game in question is Caper, in which we are at the head of a gang of thieves and with it we have to score 3 incredible thefts in some famous European cities. The band of thieves is formed by playing the Thief cards and the Equipment cards. The whole match takes place over 6 rounds.

In the box we find: 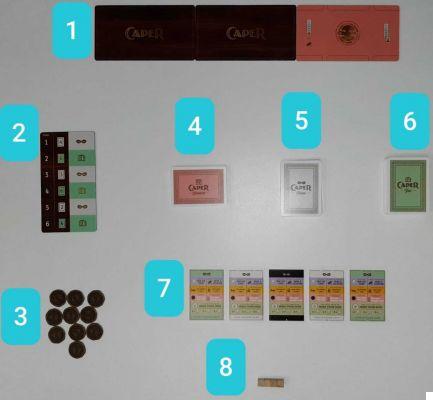 First of all we must choose one of the three cities available: Paris, Rome and London. The City cards include some cards from the Thief, Equipment and Location decks and are recognized because they have an icon at the bottom right with the miniature of the monument that represents them, moreover each city has a number of stars that identifies the level of difficulty. :

The game is played only with the deck of the city you have chosen, the other two decks are set aside in the box. Combine the City deck you have chosen with the other cards without an icon and divide everything into three types: Thief, Equipment and Location. Shuffle the three decks and place them on the table.

You have to place the three planks Crime scene in the center of the table, horizontally next to each other. Put the boards on the pink side if you want to have visible game aid, otherwise put them on the wood side. A Location card must be placed on each board and the players must place their Thief and Equipment cards on their side of the boards, in correspondence with the Places. Next to the Crime Scene boards, the Round Marker board is placed on which a wooden cube is placed on the indicator of round 1 (the cube must be moved every time you advance through the round) and the 10 coins that go to create must be placed next to it. the Coin Deposit. Each player must have the carta Mastermind, which is the reference card.

Round structure and development

The Caper rounds are six and are divided into two types: Round Ladro e Equipment Round. During the rounds each player will receive the number of Thief or Equipment cards indicated on the Round Marker board, on the same board the color of the player who starts each round is indicated in the “card type” section.

At the beginning of the round, the first player plays a card from his hand face up and places it at a location, the opposing player does the same thing and the two exchange the means of cards and the game continues like this.

The round ends when the two players are left with two cards in hand, one is played and the other is discarded to the discard pile. The cube is moved to the next round, each player receives the indicated number of cards and continues to play. In the fifth round the players are only dealt two cards, this means that they play one, discard the other and go directly to the sixth and final round.

End of the game and scoring

The game ends when the sixth round ends. The points that each player has earned under each Location, including bonuses, are calculated. To keep track of the points use the back of the Round Marker and the wooden cubes. Vince who has achieved the most points, in case of a tie whoever has the most coins wins and if the tie persists, then the player who has the green Mastermind card wins. 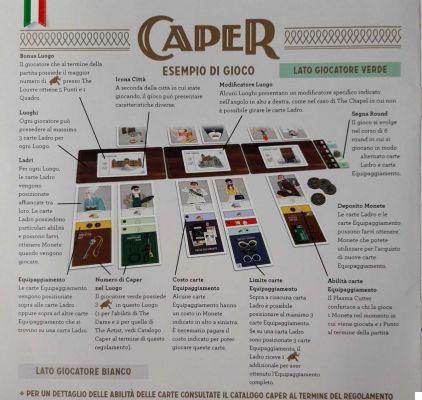 In this variant two players will play with the normal rules of the game, while the third player will be given the Snitch card and his aim is to keep the score of the other two players as close as possible.

This variant is played in 2 teams of two players and the normal game rules are used, but with some additions to the basic rules. The third and fourth players receive the Lookout card. Each team must have a Mastermind and a Lookout. The two opposing Masterminds must play opposite each other, while each of the two Lookouts must go to the left of their teammate.

Score calculation: Equipment cards are worth 3 points. The team with the highest score wins.

The regulation is very detailed, but at the same time very complex. The explanation of the playing cards occupies the penultimate 3 sides of the regulation, while the last contains an in-depth analysis of some important questions for the development of the game. Caper is a really nice strategy game, but personally I do not recommend it to those who are approaching the genre.

7.5 More Skilled Than the Dachshunds Band!

add a comment of Caper Review: In this world of thieves