The Cap Riders review. A video game with a graphic sector from Sega Master System, an audio sector from Super Nintendo which, nevertheless, I recommend to everyone

During the Milan Games Week 2016 most of the eyes were on the titles of the big software houses, but I personally spent a lot more time in the independent area of ​​the fair than anywhere else, the reason is very simple. Where the big houses showed titles already on the market, in the indie area, which has always been a great forge of the videogame industry, unexpected pearls were wandering and, above all, there was the opportunity to savor the true essence of development and passion for videogames .

Among the many pearls I encountered I tried No Riders, a video game that I had already glimpsed some time before but that only intrigued me after talking to the guys about 3Go Games. Two Spanish developers who have been able to ignite in me the desire to try their title and make a review of it.

No Riders it is not a beautiful game when it comes to the graphics or the models of the players, smartphone titles would be able to equal if not do better than this title. The footballers are a cluster of pixels trying to compose a silhouette, things do not improve even in the game menu where the writings tried in vain to reflect a retro 90 'style, but the result is nothing that leaves the player breathless . Nothing special even when it comes to the sound effects, such as the cheering of the public or when the ball is squeezed into the net, the music that accompanies the game is not bad, but it too does not shine for originality.


Having read this first part of the review you might think that he is making fun of you or that he is crazy, but trust the game I continue to recommend it. Read all the way and you will understand why.

The gameplay of Cap Riders, with very few mechanics, manages to reinvent the game of football as no software house would ever have the courage to do

The first appreciation to be made to the boys of the 3Go Games it's for courage. Reinventing the game of football is not an easy thing. We know plenty of titles that have tried, but few have done a good job, one above all is Rocket League. With No Riders we are not at the levels of the title just mentioned for graphics, lights or mechanics but I can assure you that you have fun in the same way, if not even more.

The game is very simple. It starts from a minimum of one against one up to a maximum of eleven players per team, there is the possibility of playing against the CPU or against your friend, but it does not end there. No Riders gives the possibility to see up to twenty-two players playing, where each player can be controlled by a real person! You are rightly thinking that you would have to have an infinite number of pads to take advantage of this option, and here you make the first mistake. The developers have (cleverly) thought of creating a dedicated App, which will transform your smartphone Android o iOS in a perfect controller. Imagine that one evening you find yourself for a pizza in the company of a dozen friends, with No Riders you will have the opportunity to play all together without waiting for your turn and without organizing tournaments where you waste more time organizing than playing. 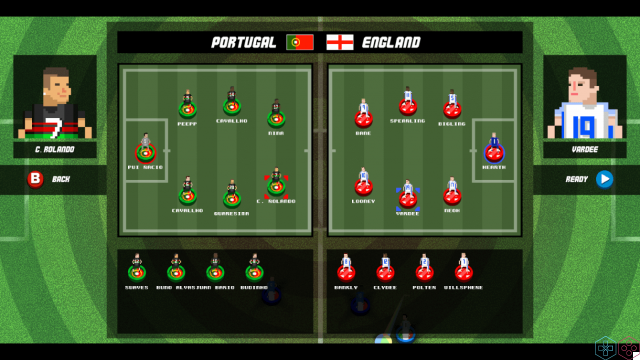 Even the single player has its share of fun but the peak is reached in the company of a friend, especially due to a particular mechanic: the dasch. In No Riders you have three mechanics: a dasch (a quick shot), a kind of magnet that will keep the ball glued to your feet for a couple of seconds and, finally, we would have two types of shots, one simple and one a little more powerful. Each mechanic cannot be overused, as it consumes a certain amount of energy which, when finished, will make your offensive or defensive ability almost nil. Consequently, the player will be forced to dose shots and powerful shots in order not to be overwhelmed by the opponents.

In addition to the ability to choose the number of players No Riders will give the possibility to choose the field on which to play the match. The fields are not numerous (about 6) but each one has unique characteristics. Among all those that have struck me the most are the "pinball machine" where we will see the players bounce and the ball against springs and the "pool table" which gives the possibility to pocket the ball that will appear on the other side of the screen. 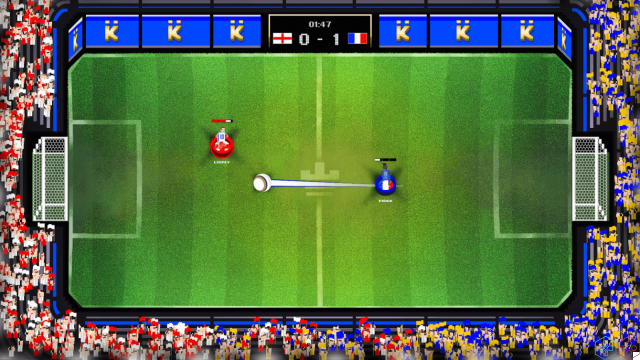 Sometimes an idea is enough to make a great game, you don't need excellent graphics or refined and complicated gameplay

Titles like No Riders they are able to remind gamers that photo-realistic graphics or very complicated gameplay are not necessary to entertain.

In a historical moment like this, where the consoles chase the technical levels of the PC and where the graphics cards are hailed as divinities, a title like the one just reviewed can remind us of the reason for choosing the video game as a means of entertainment. Playing at No Riders you have fun (and a lot) without having to waste time setting parameters or other things now a must in video games. Simply start the game and enjoy playing, the strength of this little masterpiece lies in the desire to entertain.

The price is in keeping with what the title offers, that is a pastime capable of making people laugh and excite with its simplicity, perhaps on smartphones the title would have had more response thanks to its immediacy. In any case, when I am with some friends at home I do not start titles like The Witcher 3 o Metal Gear Solid V to show how powerful my PC is, I simply say: do you want to have a laugh with a really nice indie title? At that point I start No Riders, a title capable of entertaining thanks to its simplicity.

Titles like Cap Riders are able to remind gamers that photo-realistic graphics or very complicated gameplay are not necessary to entertain.

add a comment of Cap Riders review: when an idea is enough to entertain