The first Bulletstorm was halfway between the niche title and the wasted opportunity, but with the Full Clip Edition Gearbox brings the game back to the current gen, updating it and equipping it with all the necessary frills. It even includes a new mode in which we will play the famous Duke Nukem, which belongs to the same parent company. Ready for the review? We leave for the future

If we're going to do a remastered, let's do a remastered that makes sense. We take Bulletstorm: is a first person shooter, very tamarrissimo, frenetic, sci-fi themed, from 2011. It was developed by People Can Fly and Epic Games and published by Electronic Arts on PC, PS3 and Xbox 360. In the field of videogames if you are not Pacman things get old quickly, and with a few changes of ownership we're back in the throes of the same title (well, almost the same title).

And it could very well be the remastered of something almost everyone is seeing for the first time. Basically, few people remember the game. Bulletstorm: Full Clip Edition represents the second chance to achieve success: despite the frenetic gameplay, extremely fun, and the excellent general quality (including narrative), the game failed to make its way into the hearts of a good slice of the press and gamers. After a half-successful first attempt, therefore, the Gearbox publisher tries again, and this time either it goes or breaks it, because after 6 years there is no more time.

It is time to return in the company of Grayson Hunt, General Sarrano, Trishka, Ishi Sato and all the other crazy characters we've come to love. How did Bullestorm: Full Clip Edition behave 6 years later? After trying the Xbox One, we are ready to respond.

The game is set in the twenty-sixth century, a long way from our present. The planets are now protected by a secret army called the Dead Echo which regulates their existence within the Solar System, and beyond. Grayson Hunt, our protagonist, is a space pirate by profession, a former Confederate Army fighter who is part of the elite squad called Dead Echo. Finding face to face with the Ulysses, the flagship of the Black Echo, Gray decides to shoot it down, sacrificing his own ship that makes an emergency landing on the planet Stygia. 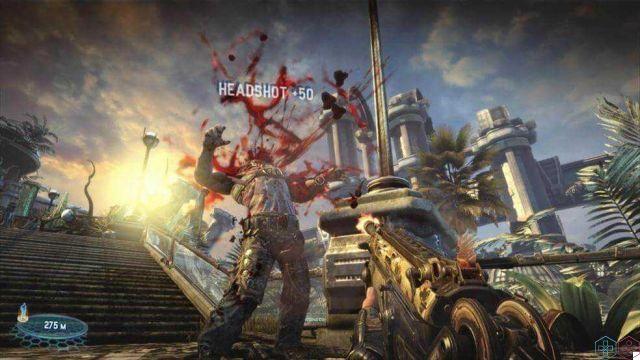 At this moment a flashback opens in which we see Gray, when together with his companions was still part of the Dead Echo, breaking into a skyscraper and killing a man named Novak, introduced by their superior, General Victor Sarrano, as a dangerous terrorist. After an inspection, however, the team discovers that Novak was a reporter who was documenting the corruption of Sarrano.

Returning to the present, Gray learns that Ishi, his closest friend, is badly injured, and the only way to save him is to use bioengineering to turn him into a Cyborg. Gray then decides to find Sarrano, who has also fallen on Stygia, and make him pay for the innocents he had murdered from the Dead Echo.

With all his crew dead in the crash, the only one following him is his own Ishi, which nevertheless has to continually fight against the artificial intelligence of its robotic half as it tries to take control. The narrative as a whole, as you can imagine, is therefore particularly interesting, full of the right twists. Also keep in mind that we did not go beyond the first few hours of the game in telling you about it, otherwise we would have ruined all the surprise. You will hardly be able not to get glued to the screen from start to finish.

Pass me that whip

If Bulletstorm is an interesting game from a narrative point of view, it becomes a production of everything about it by analyzing its gameplay. The element that distinguishes Bulletstorm from all the other FPS of the genre, with which it initially risks getting confused, are the skill shots: particular combinations of techniques, which give points in relation to the quality of the shot. 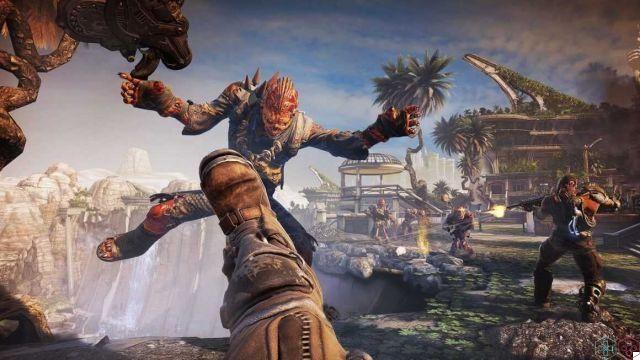 The skill shots recognized by the game system there are over 160, a variety possible only thanks to the vast arsenal and the possibility of performing amusing environmental eliminations. In front of an enemy, for example, you can choose between a very long series of options: make it fly in the air using the kick or the slide, perhaps then throwing it towards sharp points to cut it, grab it with the noose or simply shoot it. The points obtained with the kills will be spent in stations along the entire game path to buy upgrades, weapons or ammunition.

Tied to your wrist you will find yourself one electronic whisk, which you can use to fling enemies through the air and to make your way through firearms or explosive environmental traps. Scattered throughout the Bulletstorm arenas there are dangers constantly lurking, like explosive hot dog carts, man-eating plants, and spinning fan blades, meaning that sometimes a kick placed in the right direction is all it takes to give a gruesome extreme unction to your enemies. The choice of weapons may appear slightly limited, but it is possible to load them, as we have already seen, to add a more powerful secondary effect and therefore the variety is only marginally affected.

Although the gunplay appears snappy and responsive, the control scheme has remained the difficult one of the past, due to some questionable choices. Holding the Y button (on Xbox One) opens the weapon wheel, but tapping Y with a single tap can also switch your current weapon, something that often leads to serious mistakes. We cannot jump, which limits our flexibility during combat and the only way to move around objects is to approach them and wait for a hint to appear.

Of course, this does not take away from the fun, but in a remastered that aims to offer a complete experience these are slips that cannot be afforded except at a high price. As for the technical aspect, however, graphic rendering and stability have been significantly enhanced and the difference from the 2011 game is evident in almost every aspect, from the screen cleaning to the polygonal finishing of the enemies.

8 We trust a Bulletstorm 2 sooner or later.

Call Of Duty Black Ops 4 review: return to origins but look at the present ❯