In this review we will tell you about the PS5 version of Bugsnax, the new title developed and published by the well-known indie studio Young Horses

Young Horses is an indie software house that has made a name for itself thanks to the success of Octodad, its first game. Now, after a full 10 years, the team has finally released a new title called bugsnax and in this review we will talk about his in detail version for PlayStation 5.

The scoop of a lifetime

Bugsnax is set in a world very similar to ours, but populated by funny ones hairy and colorful creatures called Grumpus. In the game you will play the role of a journalist Grumpus who decides to leave for the mysterious Snakeronte Island to interview Liz Megamax, a famous adventurer who discovered the existence of bugsnax, strange creatures partly insect and partly snacks capable of turning parts of the body of those who eat them into food.

Once you arrive at your destination, however, you will find yourself facing a disastrous situation: Liz Megamax is missing for days and the camp of his expedition is almost completely deserted. From here on, you'll need to search for all the missing Grumpus and interrogate them for find clues relating to Liz's disappearance.

The plot of the game starts with a fairly simple opening, but it becomes more mysterious and interesting as you progress with your adventure. Also, despite the childish aspect of the title, over time the story will take on folds more mature than expected.

In particular this is noticeable from the interactions with the other characters given that, completing the many secondary missions that they will propose to you, you will be able to discover some aspects of their personality that go beyond their stereotypical speck mask. Sure you won't find great twists or complex mentalities but, given the initial impact, the slightly more mature drift of the game struck us. 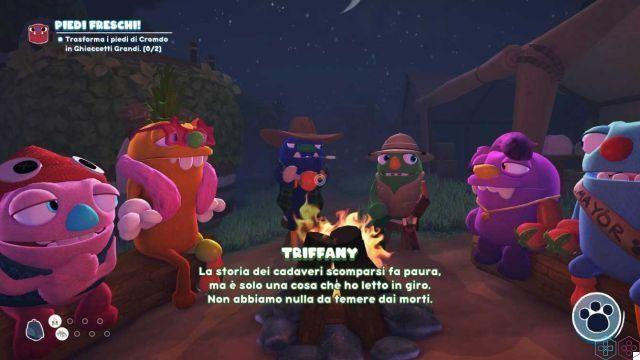 Catch them all! - Bugsnax review

Now let's talk about the Bugsnax, the aspect of this review that certainly interests you the most. Throughout your adventure, all you have to do is capture certain Bugsnax and then feed them to the Grumpus who have given you the task.

To trap the Bugsnax you will have several tools at your disposal, such as traps, trampolines or a sling shoot sauces, but before you try your hand at catching it is essential to understand the behavior of your prey. Thanks to Snaxcamera in fact you can photograph snax around the world, thus obtaining useful information to be able to catch them. For example some Bugsnax might get out of their hiding places only if attracted by their favorite sauce, while others can only be captured after a creature more powerful and aggressive than them has knocked them out.

Catching the Bugsnax will initially be fun as you will have so many tools to try out, but over time it will start to get extremely repetitive. Once you have obtained all the equipment you will find yourself at always cyclically apply the same tactics to catch the new Snax. In the game there are many different Bugsnax, so if you are a lover of the monster collector for sure you will have a lot of fun catching them all, but the methods of capture instead are few and consequently after a while they will start to bore you. 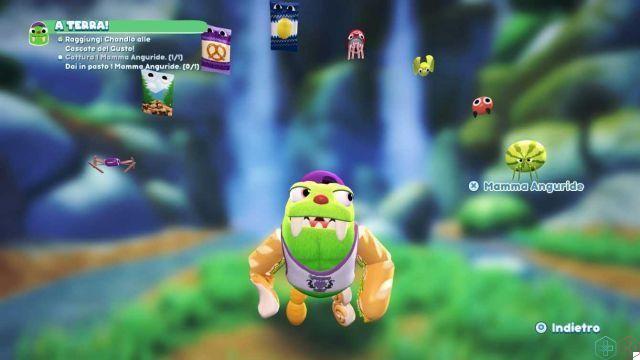 La graphics certainly not Bugsnax's strong point. The textures in the game are extremely simple and even the models of Grumpus and Bugsnax are by no means detailed. In large part, however, this extreme simplicity is part of a stylistic choice of the team and, since we are still talking about a small indie cross-gen, it would be excessive to expect more. Fortunately, however, the game manages to enhance itself a little thanks to design dei vari snacks, always very nice and different from each other.

Even with regard to the technical side Bugsnax does not shine particularly. Uploads are very quick, but they pale in comparison to other much bigger PS5 titles. The title, however, manages to exploit the various ones quite well potential offered by DualSense. The speaker of the controller allows you to hear the sound of the newly captured Bugnax, while i adaptive triggers they use different resistances according to the instrument held. 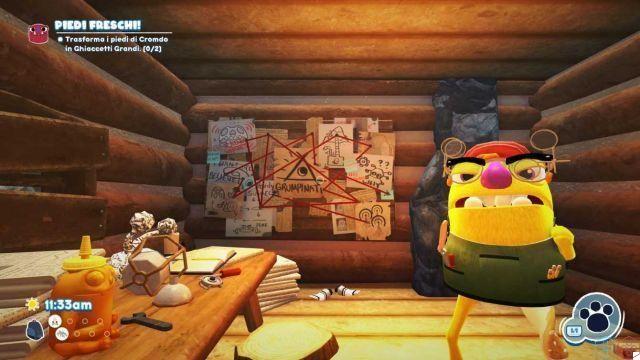 Finally, we conclude our review by summing up Bugsnax. This title might apparently seem aimed at a very young target, but in reality it hides within it Themes also suitable for adults. The story starts in an extremely simple way but going forward it will take a rather interesting and at times even disturbing turn. As for the gameplay, catching the Bugsnax is initially a lot of fun, but over time it will eventually become boring and repetitive. Luckily the Snaxes are very cute and varied, then if you are a lover of monster collectors for sure you will have a lot of fun collecting them all.

Bugsnax is available now for PC, PS4 and PS5. If you are interested in staying up to date with all the news on the world of video games and much more, then keep following us here on techigames.

add a comment of Bugsnax review: hunting for edible insects on PS5