Book Of Demons Review: A welcome tribute to the first Diablo

What can come out of mixing Diablo, trading cards and a peculiar graphic style? The answer is Book Of Demons: a very pleasant tribute to the famous Blizzard title. Find out more in our review

The history of the video game has led over the years to one evolution of the mechanics that has relegated to obsolescence sometimes simple elements of gameplay, sometimes entire genres. Never as in recent years, however, thanks to the flourishing of the indie market and nostalgia as the engine of a portion of the market, we have witnessed the birth of tribute games ready to revive mechanics that have been missing for years.

Book Of Demons, in Early Access from July 2016 e available from today only on Steam, it is this and more. In fact, the game manages to expertly mix most of the hack and slash mechanics of the first Diablo with that of a collectible card game, all seasoned with a sprinkling of RPG.

These are dark times. The peace of a small country village is shocked by hordes of hellish creatures emerging from the cathedral's vaults. The hopes of the inhabitants are about to give up when they reach the village a lone warrior ready to descend into the bowels of the Earth to defeat evil.

How do you say? Sound familiar to you? Absolutely yes. The tribute work of the Polish team Thing trunk in fact, the famous Blizzard title starts from plot, and traces dynamics and characters proposing them with great irony. But let's go in order.

The initial cutscene with which everything opens welcomes the player in the so-called "Archive of Awesome”, A place where the greatest adventures rest in ancient books. At the heart of this archive are seven stone lecterns, on one of which lies the "Book of Demons”From which you can access the game. From here it is clear that Book of Demons is part of a much larger project, "Return 2 Games", which includes six other titles in the future, a tribute to as many masterpieces of the 90s. 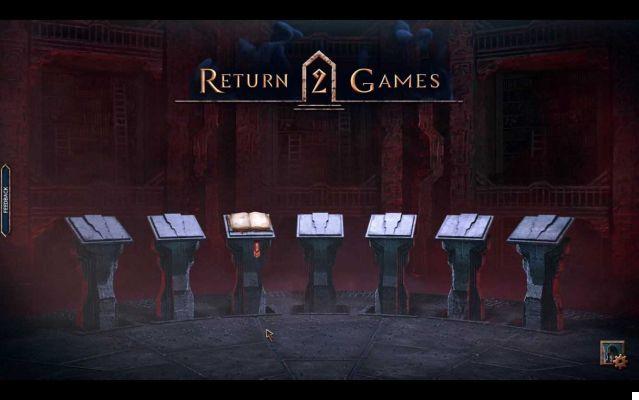 By opening the book you will be catapulted into the world of Book of Demons and, after a short cutscene in which the peculiar graphic style will be shown in all its splendor that we will deepen later, you will be given the opportunity to choose a class and a name for your character. Initially, only the warrior, while the archer and magician they will become accessible only after our character has reached level five.

One of the absolutely commendable points of Book of Demons is the great customization that you can give to your games, being able to choose not only the difficulty, but also the duration of each session.

The names of the difficulty levels leave little room for imagination: casual, normal e roguelike. Normal mode with which we faced the campaign it is never extremely difficult and will allow you to finish the game in a dozen hours approximately. This is nothing more than a more demanding version of casual. The roguelike, on the other hand, is designed for the most skilled players and looking for extreme challenges. This provides limited care e a gold cost for the resurrection: if you don't have enough gold death is permanent and you will have to start the game over.

What if you have just 15-20 minutes for a blitz game? No problem. The flexiscope is there for you. This is a tool that will analyze the way you play as well will give you the possibility to choose the duration of the game session, procedurally generating the plans of the dungeon based on the chosen time. 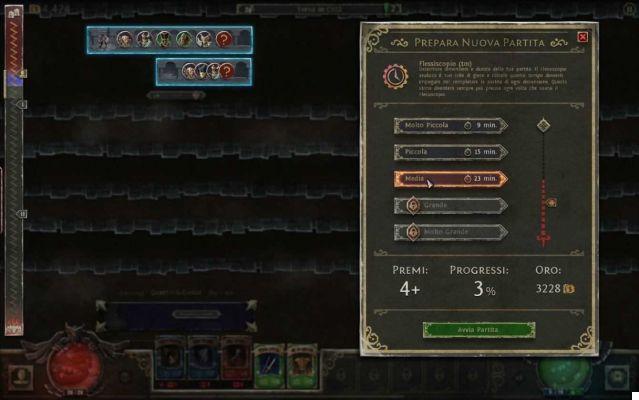 But let's get to the actual gameplay.

The floors of the dungeon are quite numerous and divided (coincidentally) between labyrinth, catacombs and hell, interspersed with boss fights: also reinterpretations of those present in the first Diablo.

The exploration of the levels is not completely free, in fact our character will only be able to proceed following a very specific track, as opposed to monsters that will be able to roam throughout the game map. However, the path you will have to follow will not be completely linear, on the contrary, it will present numerous crossroads and will cover the entire surface of the map without leaving uncovered areas. This peculiarity of exploration brings with it the impossibility of physically reaching any enemy that is far from the path itself, for this reason, any character you decide to use is able to crack blows and take down enemies from a distance, even if you are using the sword-wielding warrior. All of this will be rather strange during the first hours of the game, only to reveal itself later however a functional choice.

Completion is not mandatory but highly recommended and the game pushes a lot in this direction. As you walk on the path, our character will leave traces so that you can quickly recognize the paths already explored, traces that will take on a golden color once along that path you have collected every object and killed every monster. Once a level has been cleaned up, a message on the screen will announce its completion and will give you the opportunity to head downstairs with just a click. If you try to move on to the next floor without having collected everything you will be warned… well, if you leave behind some powerful spell don't say you have not been warned.


Even the monsters you will face resume the features of those seen in Diablo. These are divided into different types, and some are belonging to elements such as fire, ice and poison capable of altering the state of the character. Interesting the possibility of break shields or interrupt spells by interacting on the corresponding icons that will appear on the enemy himself. One criticism goes to the variety of demons: good but not excellent, a few more types would certainly not have spoiled.

A separate mention is deserved by the state of lightheadedness, especially if we were to suffer it ourselves. In fact, on these occasions the screen will be blurred and it will be necessary to collect the five stars that will appear on the screen. Nice and ingenious solution. 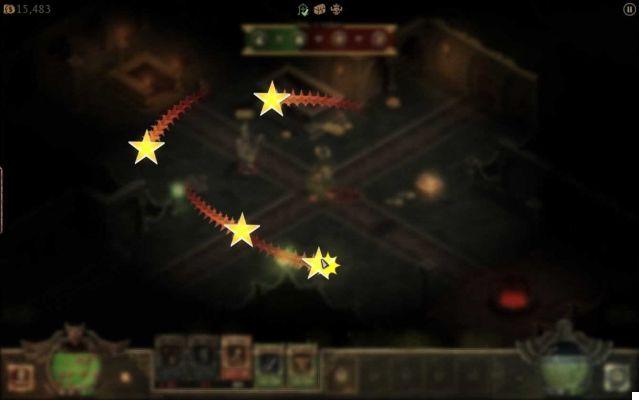 Who's in the bunch? - Book Of Demons | Review

Unlike the first Diablo instead leveling up will not allow you to increase your stats at will, but you can decide whether to assign a plus point to life or mana, needless to say in the two spheres at the bottom of the screen.

Forget it equipment, items and spells in the form you know, all these things they are nothing more than collectible cards. These will be recoverable inside the dungeon and can be equipped in the slots shown in the lower part of the interface. As per the well-established RPG tradition, the cards are divided into common, magical or legendary, and, as can be guessed, they differ based on rarity and the benefits they add to their primary use.

The use of item cards (like potions and bombs) they go to number of charges: when you finish the specific item it will no longer be possible to use the card. The use of equipment instead will block a certain amount of mana points by coloring them green and preventing them from being used for casting spells. This leads to having to find a balance between equipment and spell cards, so as not to sacrifice the use of one rather than the other.

Summing up, despite the differences, the feeling of the game system is a successful tribute to the first Diablo, and re-proposes its sensations and gameplay in a more than satisfactory way. 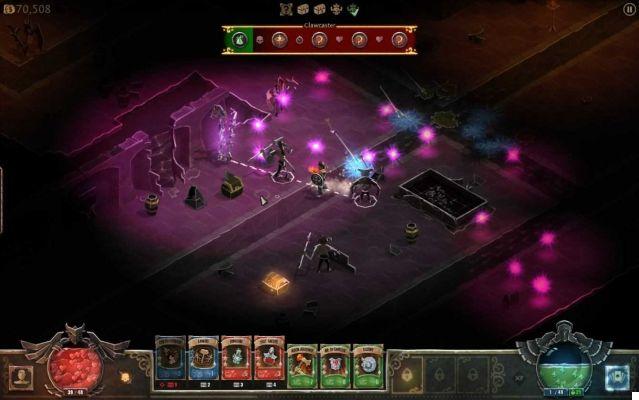 As we said at the beginning of the review, the extremely refined and peculiar graphic style is highlighted since the first cutscene. The In fact, Book of Demons is nothing more than a popup book for children and each game element is designed to appear made in papercraft.

The village is shown in full on a fixed screen in which we can interact with the inhabitants, also a re-proposition of the characters we have already met in Tristram. We could ask them card care, identification and upgrades. The innkeeper is also in possession of a cauldron in which unknown objects from the loot will automatically end up e which can be claimed upon payment which increases from time to time. In the event that he dies, all the contents of the cauldron will be lost forever.

The villagers, the monsters, up to the protagonists themselves are excellently designed as folded cardboard shapes. The interactable elements such as chests or barrels follow the same style, while the backdrops are reminiscent the boards of board games.

The animations, however, especially those of the protagonists, are the only elements of the artistic sector that do not work as they should except that… there are no animations. Indeed, whatever action is taken, from walking to fighting, the protagonist remains completely still except for a simple undulatory movement, as if moved by an invisible hand. This is a lot out of place especially in the most excited scenes, and despite being a well-contextualized choice, we would have preferred a little more dynamism, even just a mechanical movement of the limbs (which, among other things, happens with certain categories of enemies).

For the rest, the artistic style is at a very high level, with well crafted sounds and a soundtrack that almost does not stand out from that of Diablo. 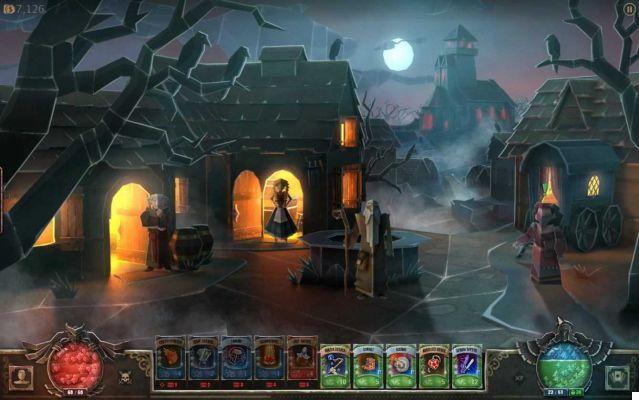 Book of Demons is a good title that re-proposes a milestone like Diablo with irony and an excellent artistic style. The gameplay is solid and fun, the card system works well and the experience is extremely customizable both in terms of difficulty and in the duration of the individual game sessions. Too bad for the protagonist who deserved a little more elaborate animations.

8.5 A must for lovers of the genre

add a comment of Book Of Demons Review: A welcome tribute to the first Diablo