We tried Blasphemous, a 2D soulslike with a unique style, did we like it? Find out in our review

A long way in search of a miraculous atonement capable of free ourselves from fouling of our sins. Blasphemous it looks exactly like that. A 2D soulslike, very similar in concept to Salt and Sanctuary, with a unique style to be discovered. The title has met our expectations, but not without some flaws, we discover some more details in the course of our review.

Before proceeding with our review, here are some hints on the development history of Blasphemous. The Game Kitchen is a small independent Spanish software house that between the 2013 and the 2016 launched a kickstarter campaign to promote the creation of their product: The Last Doors. This is the title of the first game published by these developers who, after the success achieved, have started a new campaign to encourage the production and implementation of another project, in some ways even more ambitious than the first.

Thanks to the work of the publisher Team 17, who believed in this project, Blasphemous was made. This title will be available starting in September 10, 2019, for PS4, Xbox One, Nintendo Switch and PC. Here is the trailer made for the presentation of the game on the Sony home console:

What is it about? - Blasphemous review

Let's start our review by talking about the nature of this title. Earlier, in the introductory paragraph, we tagged it as a 2D soulslike, which is saying everything, but at the same time it's like saying absolutely nothing. What should we expect, therefore, when we find ourselves playing Blasphemous? If during your career and videogame experience you have ever found yourself in front of a title like Salt and Sanctuary, you will surely have a bit clearer ideas.


Blasphemous, like S&S, takes full hands on the structure and the playful system of the various titles developed by From Software. Starting from the narrative system, just hinted at to entrust everything else to the lore which is the background to the various games, to finish to completely free exploration and without guides of the game world, passing through the countless deaths that you will have to face.

Blasphemous, however, compared to Salt and Sanctuary, takes up the dark and gloomy atmosphere of Dark Souls and elevates it to the next level, a further step which makes this game absolutely one of a kind. 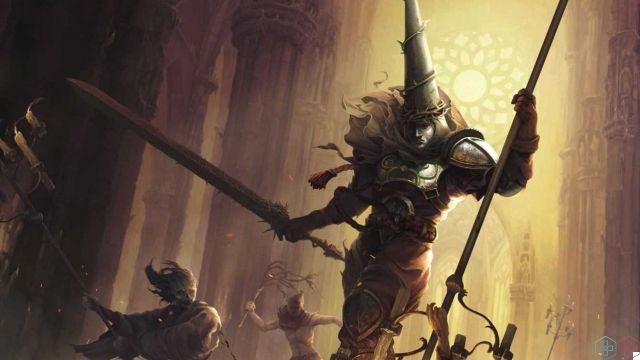 The moment you start this title on your consoles (or on your PC), what you will find in front of you will surely be able to surprise you. A stunning overall impact and at the same time horrifying (which confirms the excellent work and effort of the developers). A graphic with traits vintage e old school which blends perfectly with an excellent artistic sector. The attention to detail, even if minimal, in this game is really very interesting.

Playing Blasphemous will be like diving, in an angel's flight, into a hellish world, Dantesque almost in some places, which will be able to create very contrasting emotions in you. A kind of love and hate, of fascination and terror, of repulsion and concern. Exactly, haste, this is a very important element to consider when evaluating this game.

The excellent work of this Spanish team in the creation of the game world will push you to feel almost affection towards the characters involved and with whom you will have to do. All this will push you towards the search for a solution to all the evils that afflict this world, bringing your curiosity at extreme levels. 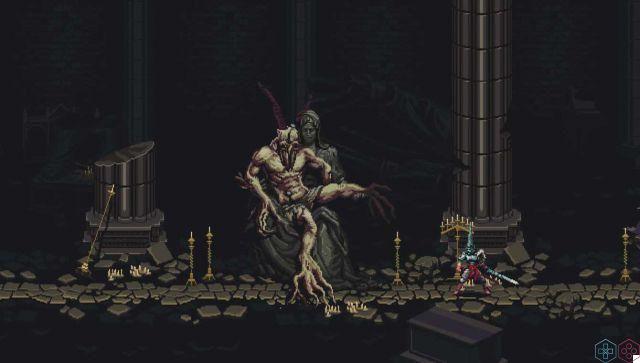 Although the game presents itself as a classic 2D platformer, the exploration of the world at our disposal turns out to be anything but linear and guided. After a few minutes, in fact, you will discover the true nature of the title and what the world requires to be fully explored. Many roads and many different opportunities. In fact, every path that you decide to take, whether it is downwards, towards the other, to the right or to the left, will lead you towards something that will prove to be useful for your experience. Starting with the ruthless and absolutely necessary search for Kneelers to finish ai Shrines of guilt.

The former will have the same function as the bonfire in Dark Souls, rather than gods Shrines by S&S. After kneeling down you will recover all the health and the bottles of blood at your disposal, you will begin your experience with only two bottles, to increase them it will be necessary to search and find empty bottles inside the map. As for the Sanctuaries of guilt, however, they will be very useful to increase the power of your sword, which will happen after a short but beautiful cut scene. In these same places, moreover, you can spend yours Tears of Redemption (see Dark Souls anime) to unlock abilities.

The latter will be earned as a result of your fights, the more enemies you kill the more tears you have at your disposal. Just like in other soulslike ones, the moment you happen to die (and trust me, it will!) You will have the opportunity to return to the point of your departure and recover the tears you had available. 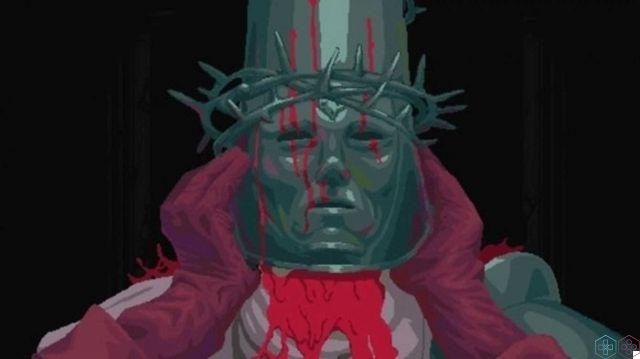 Beat That Pass You - Blasphemous Review

As in so many other titles of the genre, you will spend most of the time fighting. Combat, in the various soulslike, is a fundamental component, around which it is then structured all the scaffolding of the game. Also in Blasphemous you will fight a lot and you will do it by exploiting different elements that you will find inside the map and the game world.

You will have the possibility to perform different combos, to unlock various skills and to use gods "objects" that you will find here and there during your journey. Precisely on this, it is worth concentrating, precisely because these objects, conjugated to combat, constitute that famous building site where the pillars of the title stand.

The variety, within your fights, whether they are against common enemies, or against bosses, will be guaranteed by elements such as Prayers, which are real powers that your character will have available, come on Rosary grains that will help you to modify your characteristics and from them ability that you will unlock. With regard to the loreinstead, the items of the missions and their descriptions will be very important, as well as the relics and the various collectibles. 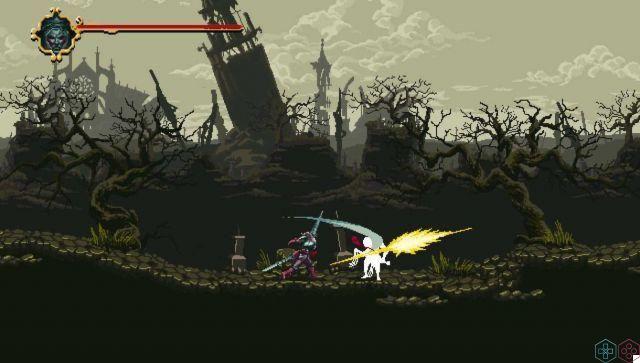 As we said earlier, this title brings with it a artistic baggage of the highest level. The atmosphere that the developers have managed to create is really very interesting. A world enveloped in this extreme, dark and sickly religiosity, in which we find ourselves wandering and fighting. Enemies are among the most beautiful things you can see in Blasphemous, starting from the minions to the various bosses.

The animations offer the title one vein splatter that fits perfectly with the surrounding setting. All this, therefore, makes Blasphemous a very interesting title in this respect. Many biblical and literary citations, or rather, references to a certain type of literary context, above all, Dante's hell.

Precisely for these reasons, some scenes are able to amaze the player and, at the same time, are able to impress. In some cut scenes and in some images it is put on display a veiled eroticism background which, mixed with a symbolism and to a iconography religious, especially Christian, justify the title chosen for this game. 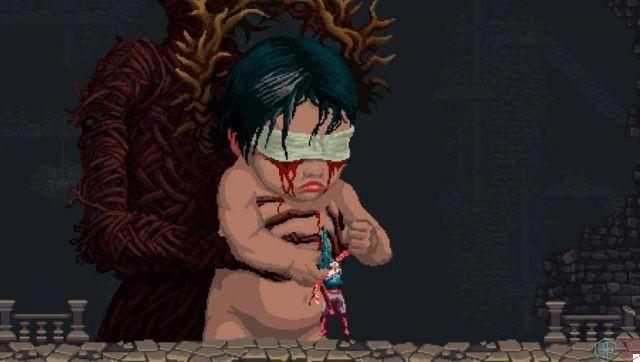 Few of the flaws - Blasphemous Review

We found few serious flaws within this game. Leaving out some inaccuracies from the point of view of the movement system, we appreciated the responsiveness of the commands, in the moments in which, however, this same responsiveness disappears, the player will be able to immediately notice it, precisely because he is well used to the game itself. In those moments, however, you risk dying and having to leave from a kneeler very far away. This may turn out to be very frustrating, but on the other hand, it is a soulslike.

A little reflection must be made on the graphics and on the result obtained through this mix between vintage, pixel art and highly detailed animations. The question we asked ourselves is the following: what if this title had been made with more “modern” graphics? Answering this question is not easy, indeed, it is practically impossible. Of course, some details could have been appreciated even more but, probably, those same animations, with a different graphic system, would not have had the same impact. Therefore, it is necessary to evaluate the product as it is, a product that in our opinion is able to satisfy all (or most) of the objectives it had set itself. 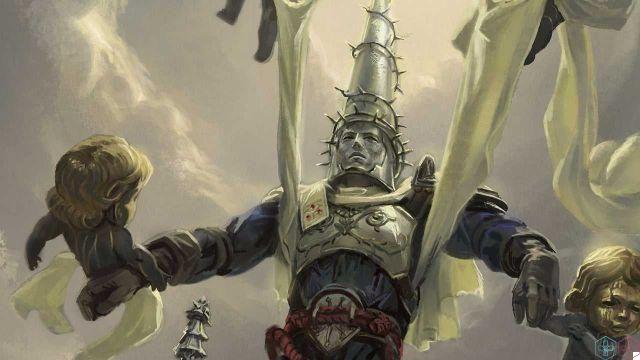 We are in the final stages of our review of Blasphemous. A title that we really liked, from many points of view. Recommended? Absolutely yes, especially for fans of the genre who are looking for a different experience but with an implant they already know and chew. We do not know, however, if Blasphemous could be a title able to bring the soulslike newbies closer to the genre, surely, however, it could be a real feast for the eyes, unless you are easily impressionable!

This was our review, let us know what you think. In the meantime, stay tuned to techigames for all updates from the gaming world and beyond.

add a comment of Blasphemous Review, En route to atonement