Black Clover: Quartet Knights represents the first videogame transposition of Black Clover, the shonen that follows the events of Asta, Yuno and the wizards of the Clover kingdom. Let's find out if it is worth diving into this adventure with this review

The month of September seems to be the period destined for video games based on anime and manga that have built their fortune also thanks to the success they had in the West as well as in the East. After releasing Naruto to Boruto: Shinobi Striker, Bandai Namco has launched Black Clover: Quartet Knights, the videogame set in the wizarding world of the Clover kingdom. Black Clover: Quartet Knights is a fighting game with third person setting, equipped with some features worthy of being explored.

Black Clover: Quartet Knights, reconstruct the story of the anime with the pad in hand | Review

If you have ventured into reading this review, you will surely already know the magical world of Black Clover, a manga created by Yūki tabata and transposed into anime starting last October. Black Clover: Quartet Knights is a video game created especially for fans of the series or rather, playing this title will have fun for everyone but the single player campaign mode is intended for those who already know the adventures of Auction, Yuno and the other magic knights.

The incipit of the story is in fact in medias res, the plot tells the past of the mysterious as well as devastating Yami, captain of the strange company of magical knights of the Black Bull. Through a narrative device we will discover the relationship between Yami and Karna, a mysterious sorceress in league with the group of rebels "Magic Eye of the White Night". The story told fully convinces and indeed, I really appreciated this deepening of a character of which little has yet been revealed in the anime. Only regret, the duration of the campaign, about 2 hours and 30 that flow as if you were watching the animated series with the plus of being in control of the most loved characters. 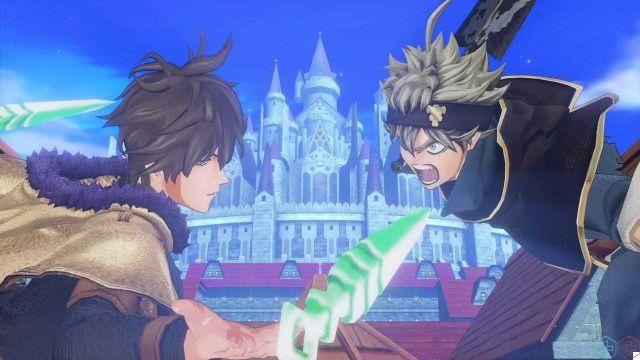 Black Clover: Quartet Knights, it's time to save the Clover kingdom! | Review

On balance, the entire game structure can be defined as a dungeon crawler in which it is necessary to clear the area from the minions and the boss on duty in order to continue. The game difficulty can be set according to one's ability and the various combat phases can be summarized with a "defense and counterattack" using all the magical abilities available (4 for each character plus one ult) that make up a typically action-shooting gameplay. Although no prior study of the situation is necessary and no particular tactical skills are required, the game is so much fun and that's what matters most of all. In reality it should be noted that for characters who prefer hand-to-hand combat (17 total characters, divided into "aggressor", "healer", "shooter" and "support"), it is necessary to be particularly cautious and have acquired a lot of familiar with the camera since for these, unlike shooters, there is no automatic attachment system for enemies.

In addition to the single player mode there is one Multiplayer very similar to what already seen in Naruto to Boruto: Shinobi Striker. Two teams of 4 players each they compete inside a dungeon in three different modes: Treasure Hunt (in which teams must work to find a key before they can open a chest and claim victory), Zone Control (a classic captures the area) e Crystal Carry (where it is necessary to escort a crystal from point A to point B).

Unfortunately, as often happens in these cases, the online servers are sparsely populated. In particular, in the PC version that I was able to review, I was able to find only 5-6 real players in a whole afternoon of research. Fortunately, there is automatic completion of teams with CPU-managed characters. 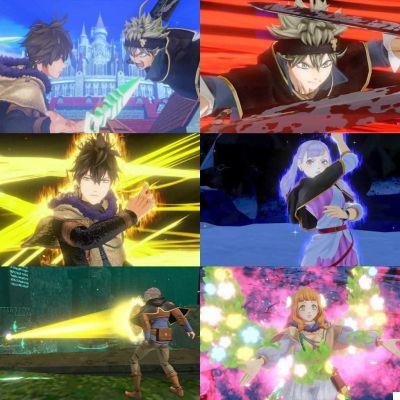 Black Clover: Quartet Knights, lots of color and care in the designs | Review

The graphics sector is characterized by a good cel-shading which partly collides with a rendering of the surfaces of the fabrics that make up the uniforms of the characters not up to the general impact. The scenarios are very well done, rich in colors with pastel shades and very defined even in the most hidden meanders. What is most appreciated is the quality and quantity of lighting effects used to recreate the magic. The various intermission scenes are made in three different ways, an excellent expedient to avoid drops in rhythm in the narrative: some are textual narrative interludes with two-dimensional illustrations of the characters, others are videos made with the in-game engine and still others, highly appreciated, are real anime movies made with the same care as the animated series. Everything is always very fluid and free of bugs or annoying frame drops, which settle on 60fps constant even at maximum details.


The sound sector fits perfectly with the atmosphere of Black Clover and follows the melodies already appreciated in the anime. Japanese dubbing is a must, especially considering how much it contributes to the characterization of the characters.

Black Clover: Quartet Knights, how to do the homework but do it right | Review

Black Clover: Quartet Knights is a modern title that re-proposes a formula that is now almost out of use among the videogames distributed by the big publishers, without disfiguring it. The in-depth study on the character of Yami in the single-player campaign forces the purchase of all fans of the series who will find themselves dealing with a fun title, albeit devoid of innovations.

Black Clover: Quartet Knights - PlayStation 4 39,95 EUR Buy on Amazon7.5 THE VIDEOGAME FOR FANS OF THE SERIES

add a comment of Black Clover Review: Quartet Knights, it's time to browse the grimoires