Drop anchor, set sail and get ready to sail the Black Bones review, but watch out for other pirates

The sea is full of pitfalls, but you are a pirate and fear nothing! But know that you will not be the only one to sail the seven seas with his sailing ship. Other pirates, like you, are on the hunt for treasure and won't think twice about attacking you if need be. The goal of the game is to find cannonballs to hit opponents and sink their vessels, but to do so, you need to land three hits. 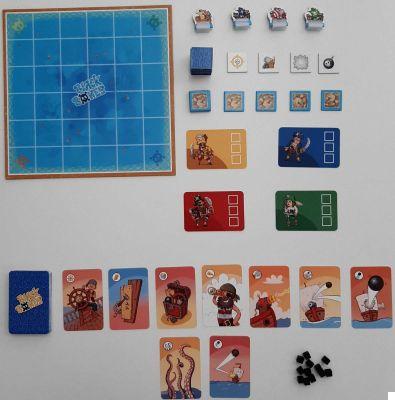 First you have to get the to weave Scoglio and you have to place them on the game board, to do this you have to choose and reproduce one of the maps present in the List of Maps which you can find on the last page of the regulation. Then mix the Game tiles and place them face down on the empty squares, remembering to leave the four squares in the corners marked with skulls free. Then mix the Action cards and give four to each player, the remaining ones form the draw pile that you have to place face down next to the board and always put the Hit Mark cubes next to it. As a last step, each player must choose a Vessel token and take the corresponding Character card. Now you can drop anchor and set sail for this great adventure!

The matches are played in turns. During the first round of the game, players can only move around the board to look for cannonballs and no offensive action is possible. After the first turn, however, it is possible to perform the following actions: moving and offensive actions. Let's see specifically what is done during each of these actions:

Whenever a player hits your Vessel you have to place a Hit Cube on an empty space of your Character card, when all three spaces are full then you are immediately out of the game.

A win the game is the last Vessel remaining on the game board. It may happen that the Game tiles run out before there is a winner, in this case all 24 Game tiles are shuffled, put back on the board and continue to play until there is only one player left in the race. There is no tie!

Black Bones is a nice game already from the aesthetics, in fact I really like its illustrations and the components are well made and resistant. There is a good balance between strategy and randomness, moreover the games are variable thanks to the 9 game schemes that you find in the Map List, but if you have imagination you can try to invent some schemes yourself. The game is simple and the functions of the Game tiles and Action cards are well explained in the rules. It is a great family game.