In this long-winded review we are going to examine the latest collection released by Gust for his flagship franchise: let's analyze together Atelier Mysterious Trilogy Deluxe Pack

All fans of the Atelier series are extremely aware that Gust has never been a company aimed at change. All the previous chapters of the two Atelier Ryza, which marked a big turning point for the franchise, they have always closely resembled each other both in mechanics and, in general, in script and character management. A bland and not very thorough narrative accompanied by iconic and very caricatured protagonists, who carried on alone the tens of hours that were needed to complete the title, without ever being memorable from any point of view. So why does the franchise have so many fans? Simple: the underlying gameplay loop works, every time.

After talking to you, at the time, about the Atelier Dusk Trilogy collection and the two chapters of Atelier Ryza (of which you can find the reviews here e here ), today we are here to tell you about another collection of titles, perhaps the most unfortunate of the entire series. The Atelier Mysterious Trilogy Deluxe Pack is a collection that includes the three titles of the Mysterious series released on PS4 e PS Vita, specifically Atelier Sophie, Atelier Firis and Atelier Lydie & Suelle. This trilogy is certainly not one of the most loved by Gust fans, and the reasons will soon be explained, nevertheless it is interesting to find out how much sense it makes to have created a remastered of not so old titles. Let's find out together, in our Atelier Mysterious Trilogy Deluxe Pack review.

Atelier Sophie: The Alchemist of The Mysterious Book is the oldest title of the three included in this collection, and perhaps the most aged badly, perhaps also considering that originally the title was also released on PlayStation Vita. We will find ourselves in the small town of Kirchen Bell and in the shoes of the young alchemist Sophie, a typically Japanese girl: clumsy, sunny and terribly pretty. Our protagonist sports basic alchemical skills, which lead her to numerous failures, not even being able to count on the help of a teacher or a mentor. That is until he crosses paths with a mysterious talking book who has lost his memory and will only be able to recover removed memories by noting down new alchemical recipes.

You will understand how basic the narrative is from the first hours of the game, but the main problem arises when not even the protagonists are so interesting as to be able to maintain a narrative sector. Leaving aside the stereotypes, which are the basis of the characterization of the characters in Gust's works, in the case of the supporting actors of Atelier Sophie, but also of Sophie herself, you will not find a crumb of interest or fun. At the time, Atelier Sophie was hardly liked by Gust fans because it came immediately after the closing of the Twilight trilogy, much more mature and compelling than what later turned out to be this partial return to origins.

The focus of Atelier Sophie however revolves around the gameplay and the constant search for new ways to unlock additional recipes. Any operation performed by the protagonist, whether it's collecting new materials or defeating a certain amount of enemies, it will bring you new ideas and will allow you to continue with the story. In short, classic routine of the titles of the series, exacerbated even more by the loop that is created. 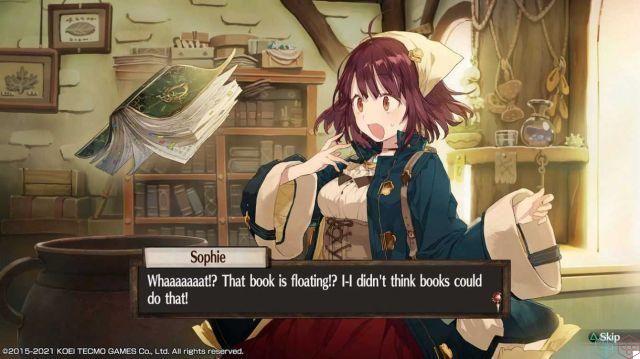 Atelier Firis: The Alchemist and the Mysterious Journey has decidedly more interesting narrative premises than Atelier Sophie. The young protagonist, Firis, lives in a small town locked up underground, without the possibility of seeing the sky except from some strategic point. The girl obviously sees this situation as a form of imprisonment and he envies his sister, physically stronger and better prepared, who is allowed to go out into the outside world to hunt monsters and procure materials. This situation of apparent calm will be shaken precisely by Sophie, the protagonist of the previous chapter (which therefore acts almost as a prequel) who will teach the basics of alchemy to the young Firis.

Originally Atelier Firis was heralded with great fanfare as the first open world title in the series, but on balance open world you will find very little. The maps will all be practically empty, bland and sloppy, with very few points of actual interest. The greater vastness of these maps, however, was going to weigh down an already precarious technical reality (remember, the titles were all also released on PlayStation Vita) causing various slowdowns and some sporadic freeze. The DX version, fortunately, includes one vehicle series with which you can move with greater speed within the various maps as well as some particularly powerful additional bosses and the new features common to all three titles which we will talk about later. 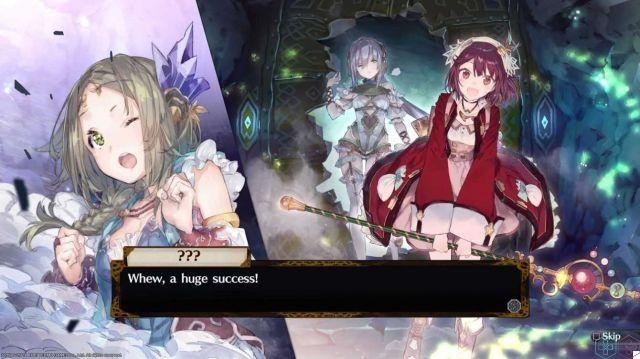 Let's leave aside a not very functional open world like that of Atelier Firis to get to the spearhead of this collection, Atelier Lydie & Suelle: The Alchemists & The Mysterious Paintings. Despite being the best title of the three, this Atelier is the exact reason why we are really perplexed by the birth of this edition. The game is in fact dated 2018 in Europe, and is already present on PlayStation 4 and PC. We certainly understand the desire to modernize it and add "fan-friendly" content, but it seems to us really very soon from a purely temporal point of view.

The twins Lydie and Suelle live in Merveille, motherless and raised only with their father. The two help keep the man's small atelier, one, active extravagant artist who creates particularly beautiful paintings, but just as strange. Strange enough that one day like many others the two girls will find themselves entering one of these, transported to an alternative world full of quality materials and that would be tempting to any Alchemist. 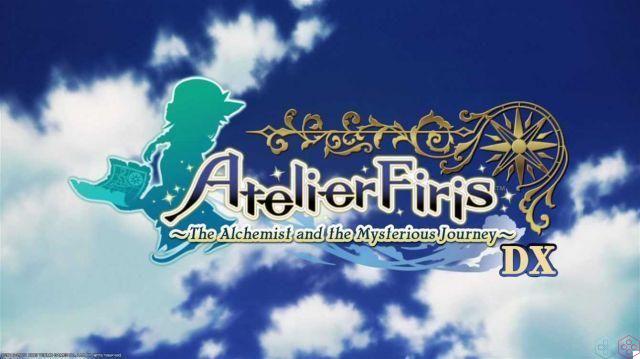 The narrative premises therefore, although always bland and not very intriguing at first, are there this time and if we also consider the simultaneous presence of many NPCs, including several well-known faces, and the possibility of exploring a rather large city, make this chapter certainly the most enjoyable of the whole package.

Despite this, it remains that too Atelier Lydie & Suelle is well below the quality standards of the Dusk series and those that will later be the two Atelier Ryza. The low budget that Gust has dedicated to it (think that the title arrived in the West without even an audio track dubbed in English) has certainly not helped the production, simply making it a springboard for the reinvigoration of the brand which took place precisely with the next two Ryza. 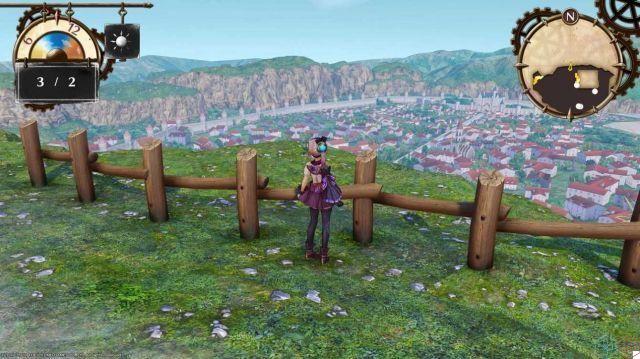 The DX version of the three titles does not make major changes on a technical level. They are remastered versions, but of relatively recent titles and of which, therefore, it has not been possible to retouch so much. The cel shaded graphics of the various characters in all chapters always appear pleasant and very colorful, with very detailed and unique models. Too bad for the creation of the environments, both internal and external, which especially in the Atelier Sophie and Firis are dull, empty and soulless. In Lydie & Suelle the situation is improving, although not as significantly as the fans would have liked.

Notable additions to the DX version include the photo mode added to all three games, which allows you to take particularly "suggestive" screenshots of all the protagonists. Some changes to the quality of life of the titles have also been added, with the possibility of accelerate the race and the speed of the clashes. Furthermore, the games are inclusive of all the DLCs released by Gust over time, and both Lydie & Suelle and Firis have original add-ons with extra episodes or, as mentioned earlier, particularly tough bossfights. We do not find, however, a reason to recommend the purchase of this collection to those who already own the titles on PlayStation 4 or PC.

This is because, in the face of the (few) improvements introduced by the DX version, we are talking about relatively young titles that we would hardly have thought would be "remastered" so soon. The previous trilogies included all games available in the PlayStation 3 era and never released on later Sony consoles or even less on Nintendo Switch. In this case, leaving aside the fact that even owners of the Nintendo hybrid will be able to try Atelier Sophie and Atelier Firis, it's really hard to recommend Atelier Mysterious Trilogy Deluxe Pack to anyone who isn't a huge fan of Dusk's work. 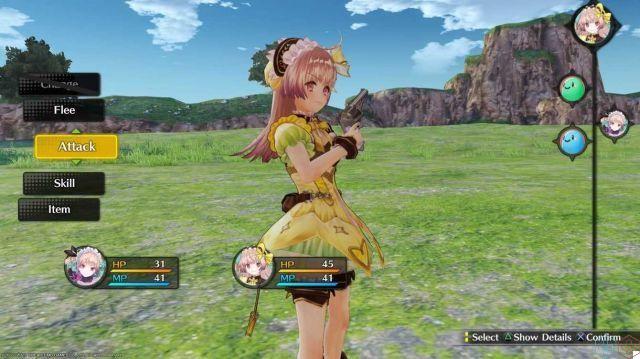 We therefore end this review of Atelier Mysterious Trilogy Deluxe Pack thus recommending the purchase to all those who have enjoyed the previous trilogies and who have never played the adventures of Sophie, Firis or Lydie and Suelle. This is because, effectively, at the price of 89.99 € (39.99 € if you buy the titles individually) you will have hundreds of hours of “Atelier” in your hands to be stripped to the bone. The fact remains that the Dusk trilogy, as well as the two Ryza released recently, are definitely on another level of quality. In short, the Mysterious series is exactly as we remembered it: a small step back for the forward throw.

Find the Atelier Mysterious Trilogy Deluxe Pack on Nintendo Switch, PlayStation 4 and PC. Stay tuned with us at techigames for all the news, guides and reviews on videogame and tech! And if you are interested in game keys at affordable prices, we recommend that you take a look at the InstantGaming catalog!