The definitive version of Ark has been available for just over a month, let's see how the dinosaurs of Studio Wildcard are doing

Nowadays it is starting to be slightly redundant to explain the origin and nature of Ark: Survival Evolved. Building on a success born and grown since 2015, the year of release of the game in the Early Access version, Ark reached the final version on August 29th, 2017. It is available on PC, Xbox One and PS4: the latter is the version we tested.

It is also true, however, that not everyone knows what to expect from the game developed by Studio Wildcard e Instinct Games. Explained as simply as possible, Ark is an open word survival set on an island filled with dinosaurs and prehistoric creatures. We will wake up on a beach, poor castaways without a past and without resources. In the left wrist we will have a strange metal contraption and uncontaminated nature around us. What do we have to do? How should we do it? We won't have too much time to answer these questions. 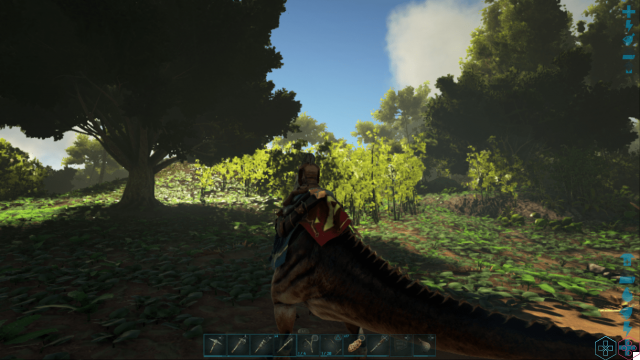 Let's go on an adventure in the world of Ark: Survival Evolved

Ark: the first steps into a prehistoric future

Going back a few moments, the first task that we will be asked to fulfill will be the creation of our character. The editor turns out to be poor in options and more dedicated to all those who want to create various deformities rather than unique and visually enjoyable characters. We will then have to choose where on the island to start our adventure: each spawn area is defined according to a level of difficulty. We will aim for an "easy" area and give the okay. Man or woman, once our adventure has begun we will find ourselves on a beach. On the right of the screen, we will notice the HUD which indicates, among others, the levels of resistance, weight, health, hunger and thirst.

Without resources, tools or tutorials of any kind, we will have to understand that we can interact with a whole series of elements of the game world. The bushes will give us fiber and berries, a food with little nutritional value but present in large quantities. The trees must initially be punched to obtain wood and straw. On the ground, we will find stones.

With these resources we will be able to create our first tools such as the ice ax, useful for hitting trees and rocks to obtain resources in greater quantities. Also, without realizing it, we will have leveled up. In Ark, in fact, every action earns experience points, even standing still. The level up allows us to place a skill point in one of our statistics: do we want to be able to carry more resources, increase health or be faster in the race? The choice is up to us. Immediately after, we will have access to the engrams: creation recipes to be purchased with the "engram points" also assigned to each level up. Once we have obtained a recipe, we will be able to manufacture a new instrument, subject to the possession of the relative resources.

After the first few moments, we will have to be careful not to anger the dinosaurs, well ready to make us their next meal. One of the next goals will be choose a spot to place a base. We will have to build a hut and a campfire to keep warm. It will also be important to have a bed, which will become our respawn point in case of death: otherwise we will have to choose one of the points set by the game each time that will force us to retrace long stretches of road fraught with dangers. In any case, upon death we will lose all the items we have in our inventory: it will be essential to find our previous body (the position will be indicated by a column of green light) and regain possession of our possessions.

We will begin to explore the island, step by step, armed with spear and bow. Slowly, we will begin to approach a whole series of possibilities. The various creatures can be tamed, making them our bodyguards or means of movement. We will be able to cultivate by finding seeds and learning the engrams necessary to create an irrigation system. In the distance we will see three flying towers and countless lights that will illuminate the night sky: what are they hiding?

Ark, level up after level up, meter by meter, will reveal itself in a crescendo of options and possibilities. We have the freedom to manage everything. Survival will always be our thing, in any case. Eating and drinking will be key, and throwing yourself into unfamiliar areas will mean quick death. 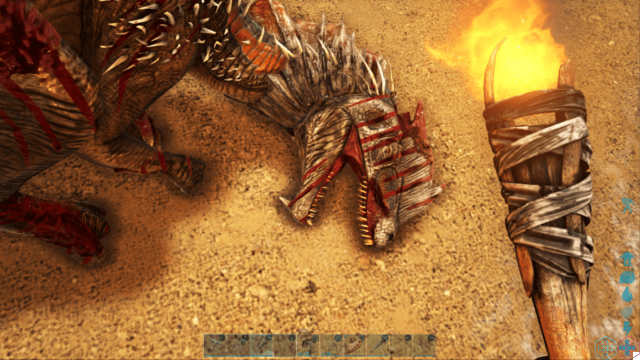 She was Dilolololo: she sacrificed herself to save me from a triceratops. Press X to pay respect

One of Ark's best features is that it is layered. It is a type of opera that works on multiple levels and manages to entertain different types of players. It can be played offline, totally in single player, without help of any kind. If you are looking for a survival experience without clear explanations, Ark is for us. Taming a dinosaur with no idea how to do it will be a long and difficult process. Understanding the usefulness of some objects will necessarily have to go through a series of attempts. Even just building the aforementioned irrigation system is not an instantaneous thing.

But if all this is not for us, Ark "seniority" comes to our aid with the wikis and the thousands of guides already present who will explain everything to us. We will then be able to play with friends, in a private match, so as to obtain strength and knowledge thanks to the number. Or throw us into an online PvP or PvE server. These latter possibilities, however, are not very approachable if you do not know anyone inside.

Ark, undoubtedly, works and is fun if you are able to understand which mode is best suited for us to play.

At the same time, however, it is undeniable that some difficulties are more a product of bad realization rather than a consequence of the survival genre. Above all, the management of the menus: born on a PC, there has not been a perfect readjustment of the commands and of the inventory structure; it will be done in a few hours, but the system is imperfect.

Much more problematic is the interaction with objects and, above all, with our tamed dinosaurs. In order to do anything, we will have to access a tremendously inconvenient radial menu in its countless submenus. I've lost count of the times I've inadvertently given my Dilophosaurus wrong commands because the radial menu accepts or rejects the toggle movement at its discretion.

To all this are added the problems of online gaming. Most of the hours spent on the game were faced with a friend (in my opinion the best way to play Ark), but every attempt by him to access my game required at least ten minutes before being successful . The game at that point worked perfectly for even more than an hour, only to inexplicably collapse.

Other fundamental mechanics, such as making your friend a member of your tribe (mandatory for a real coop), are also handled in an absolutely unintuitive and unnecessarily convoluted way. 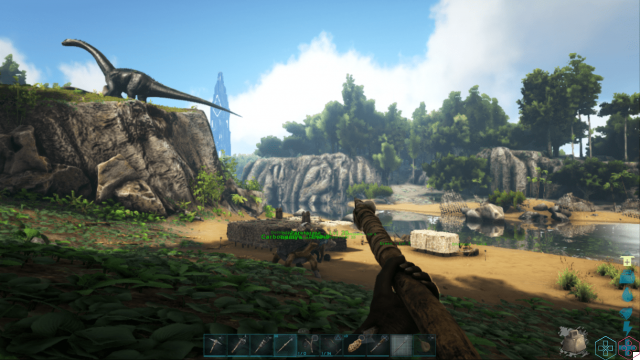 On a technical level, the game is still immature. Although the stylistic impact is respectable (walking in the forests and seeing in the distance a triceratops fighting a raptor is an interesting experience even for non-dinosaur lovers), the game struggles quite a lot when it comes to loading textures. and polygons, reflections, shadows, interpenetrations and the frame rate. It is not a catastrophic and unmanageable situation, but with each open menu we will see the game collapse to a very few fps for a couple of seconds and in the most agitated situations it will never keep thirty frames. The lighting system is valid, but certainly Ark is not a title to buy for the brute force of the graphics (in the standard PS4 version). The sound defends itself discreetly, with valid environmental effects and suggestive sounds of creatures.

The game is translated into Spanish, but let's say it's not all state of the art. In addition to certain (rare) elements inexplicably left in English, in general the work done was visibly done in a hurry and with little care.

Ark: who should buy it?

Ark is a game that is suitable for multiple players but which objectively gives its best over a very long period and with at least one friend within reach to support us. After all, spending an hour cutting down trees to build a mega parasaur enclosure is more manageable if you can talk and be distracted. The problems of menus and online will annoy all those who demand immediacy and speed: characteristics, however, that do not define Ark even in its successful parts.

Thanks to Koch Media for giving us a copy of the game for review.