Arise Review: A Simple Story, in a whirlwind of emotions

After concluding the Arise: A Simple Story campaign, we are ready to sum up the Piccolo Studio adventure in our review

Arise: A Simple Story is the first title of Piccolo Studio, a Spanish team that has worked for 20 years in the advertising field. The members of the studio have always hoped that, sooner or later, one of their video games would see the light and, therefore, they began to put together a team of young talents and veterans of the sector to make this dream come true.

Arise: A Simple Story was born from this, an adventure that made us reflect, smile and move several times during the short campaign. So, let's not get lost in chat and let's kick off the full review! 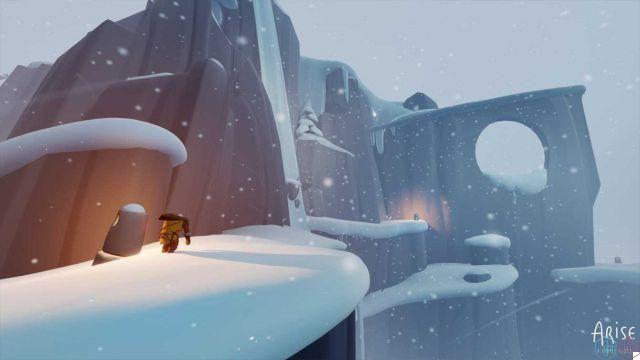 La plot by Arise: A Simple Story is not clear from the first cinematic, but it intensifies over the course of the 10 chapters that make it up. The title comes to life in a snowy mantle in which only our protagonist is present: an elderly Norse. This scenario represents a sort of menu that allows us to continue with the chapters. The selection of levels is very interesting since, through a button (square in the case of PS4), the main character will raise a snow sculpture from nothing, which represents the most characteristic memory on which that chapter will be focused.

Already from the first level we will begin to understand the nature of the journey that the protagonist intends to make and the origin of the scenarios that we will be called to travel. Indeed, everything that surrounds us is derived from the memories of the elderly. Everything becomes clear once we come across the first statues depicting him and a young girl in their childhood and, as we go on in the adventure, we will find many more. All this represents the real narrative of the title that is crowned by memories.


Memories are the "collectable”Of the work and we will find them around the scenarios, often in quite narrow and not easy to find places. The latter are essentially luminous spheres which, once taken, will unlock images that tell moments of the protagonist's life, making us understand the events in a simpler way even if they are already very clear in themselves. 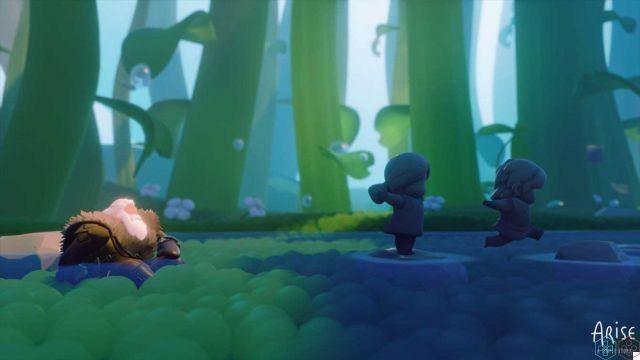 Arise: A Simple Story is basically a platformer that has the control of time as its epicenter. Yes, because through the right analogue we will be able to send the latter forward or backward with consequences on the scenario and beyond. All these changes not only affect a skimpy period of time, but even (in some levels) consist of real changes of seasons.

Seeing walkways rising with the water level thanks to the melting of glaciers in spring or sunflowers changing direction following the sun (as well as making everything more fun and colorful) gives acrazy harmony to the title of Piccolo Studio. All these sections are based on jumps and on guessing the right timing, a very recurring formula but enriched by the aforementioned temporal changes.

Proceeding with the work we will discover new mechanics, such as the use of the grappling hook or the possibility of being able to stop time in order to exploit a certain object in order to overcome the obstacles that appear in front of the protagonist. The mechanics of theClimbing (which reminded us of that of the first Assassin's Creed), as well as further utilities given by the control of the time that we do not list to avoid spoilers.


The gameplay side of Arise: A Simple Story is really very successful and well thought out. Even if the base always remains the control of time, the difference between the scenarios that are linked to the mood of the main character manages to make the mechanics varied and always coherent, adding thickness and color to the platform phases, which are always spot on. and never subdued. 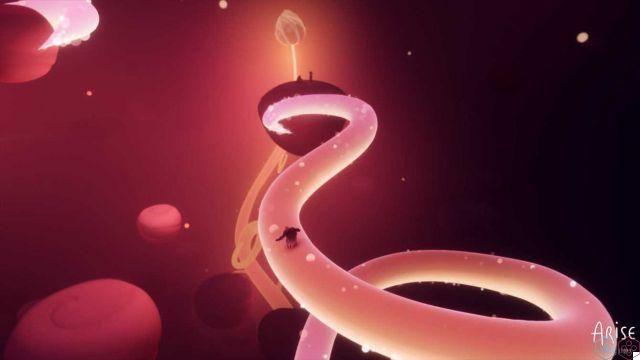 If we only had one adjective to describe Arise: A Simple Story, it would be "exciting". The effort of the Spanish studio has turned into a truly remarkable work of art, which analyzes life in every aspect. This "simple story" represents a journey that is undeniably absorbed by the player himself, who is carried away by what he sees and hears.

Everything that we have the pleasure of observing is clean, essential and each location is beautifully crafted. What we see is (as we said previously) a reason for incredible immersion together with the music. Every place that surrounds us is poetic, harmonious and manages to make us fully understand the morale of the exhausted protagonist through elements, lights and colors. We will pass by places surrounded by nature in the middle of spring, with elements of the scenery much larger than we might expect, which represent the naive memories of the protagonist in childhood. However, we will also travel through rocky and ruined locations, strongly altered by his feelings at the time.


The music that is the background to our journey is magnificent. Based on the piano and violins, they manage to change our mood, tearing us a smile in the yes moments and leaving us open-mouthed or with a sense of emptiness in the most bitter phases. In some sections the melodies gradually increase to make us appreciate (or not) what is about to happen, a goosebumps treat.

The adventure that Arise: A Simple Story allows us to live, lasts a few hours but is incredibly exciting. The keys touched by the developers in the process of creating this work are both sweet and bitter. The title managed to draw us into a truly unique whirlwind of emotions. The life of each of us is characterized by defeats and sufferings which, however, form a solid basis for all the happy moments and victories in which we always hope.

Arise managed to make our story made up of memories of the old Norse, made up of dark moments and revenge. Piccolo Studio was able to get us excited several times during its first adventure, leaving us with a smile and a sense of emptiness at the end of the latter. At the same time, however, it made us think (and a lot) about how the circle of life ends by giving us back everything that has stolen from us.

add a comment of Arise Review: A Simple Story, in a whirlwind of emotions