Ankh: Gods of Egypt, the gameplay of the next CMON hit

The wait for this title has been mounting since August 2019, when CMON first announced that it was working on this project.

Since then, the information gathered between conventions and speculations have allowed us to begin to outline the physiognomy of this title which, we hope, will be able to confirm and improve the sensational success of its brothers.

Ankh: Gods of Egypt and the game's setting

It seems almost trivial to make it explicit, however the game is set in Ancient Egypt; it must be said that this setting is experiencing a period of great revival, since even Matagot has recently decided to launch the 2.0 version of the famous Kemet!
Unlike the latter, in which we impersonate mere mortals, in Ankh: Gods of Egypt we will be the same gods! But not all that glitters is gold, because we will experience their decline (apparently, the theme "Twilight of the Gods", or Ragnarok for friends, really likes the good Lang); our goal will be to grab the wreath of the only divinity of Egypt, in a world less and less devoted to the cult of the gods.

Gameplay: how does it evolve compared to its predecessors?

In fact, it changes quite a bit. It is a game for 2-5 players / trici, competitive (with a due asterisk, as we will see later) and classic "dudes on a map", like its brothers Blood Rage and Rising Sun. In short: warriors and monsters, with the usual CMON quality, guarantee their appearance also in this title.

The similarities with respect to Blood Rage and Rising Sun

The three games have obvious common threads, starting with the author of course, the famous Eric M. Lang; but also in the artistic sector the hand of Adrian Smith is confirmed, who gave life to ferocious Vikings and honorable Daimyo, as well as the design of the miniatures is again entrusted to Mike McVey. In addition to the triptych of authors, the trilogy is generally characterized by:

The differences from Blood Rage and Rising Sun

What Ankh: Gods of Egypt differs in is, in Lang's own words, in one "sandbox" structure; the turn of each player is much less structured than in the two previous games, and the map is less rigid, which can be divided and split. Remember Settlers of Catan, where on the hex map you build along the sides? The mechanism is the same, having a hexagonal map on which we redraw the Nile Valley to our liking… We are still gods, after all!

Another difference is the victory point mechanism (simple cumulative), replaced by a Devotion track that can increase or decrease, and in which victory arrives by reaching the top: to use another playful comparison, it is like the military track system of 7. Wonders Duel.

Finally, the deities we impersonate have powers that drastically change our style of play; although this element was already present in Rising Sun (while it is absent in Blood Rage), Lang has made it known that in this case the asymmetry will be extreme… To which the undersigned, trying to continue to understand where the author got his inspiration from, immediately thought of Root!

Ankh: Gods of Egypt and the combat system

Looking for information about this game, I often happened to associate the gameplay parts of Ankh: Gods of Egypt with those other games; nothing bad, basically little is invented and a lot of rework is done, but when I learned about the combat system I felt mixed feelings. It is basically identical to that of Kemet, ie each player has a hand of combat cards that are the same for everyone, about ten; when fighting, one is chosen, which is played simultaneously with the other players and is later discarded. To recover the cards used previously, we have one with the specific effect "shuffle your hand of combat cards".

Will the “Kemet system” work?

The reference to a combat system is clear which, beyond all, is exceptional, being one of the least dependent on alea ever, while leaving room for twists and turns. It characterized Kemet, or what we can now define as the "competitor" of Ankh: Gods of Egypt.
Side note, also Kemet: Blood and Sand, 2.0 reissue of Kemet, is preparing to land on Kickstarter in the next period and we will follow the developments with great interest!
However, it should be noted that Ankh: Gods of Egypt retains Lang's trademark, or "pick your battle". While in Kemet you can reasonably aim to win every battle, in Lang's games you have to choose carefully where to win and where to lose, which adds an exciting tactical complexity.

What will make Ankh: Gods of Egypt a unique game?

So far we have talked about the gameplay of Ankh: Gods of Egypt in a comparative way, trying to understand how it was born and what kind of game it will be; however we have not yet mentioned the two features that will make this title unique and inimitable.

The gameplay of Ankh: Gods of Egypt at risk of satisfaction

First, a mechanic that creates annoyance and skepticism in many, and with good reason: player elimination.
Moreover, in this case the elimination will be inexorable, condemning the player from time to time in the lower parts on the Devotion track; the game hasn't even launched e I already feel the adrenaline rush in trying to do just that little bit that is enough to survive another shift the merciless indifference of mortals, which condemns us divinities to oblivion.

This will certainly turn up their noses for many, initially including myself; yet Lang, aware of how this perverse and evening-splitting mechanic is seen, wanted to clarify a few things: player elimination occurs only in the last three game turns, which run very quickly, and only interests those who do not satisfy from time to time of the minimum Devotion requirements. I deduce that the game could already end in the third to last round, if only one player were to remain "afloat", but it is too early to be sure.

On the other hand, games that have known a colossal success both on Kickstarter and in stores, have incorporated this mechanic in a much more natural and drastic way, such as for example Nemesis.
Also to decrease the risk of becoming passive spectators, it seems we can team up, which brings us to the second mechanic.

A mechanic never seen before: the "merge"

Indeed, "team" is not the exact term, because it refers to cooperative games or mechanics already seen in Rising Sun: the term used by Lang is "merge", unite, merge two divinities. He deliberately glossed over the details, but ensured that a mechanism of this type is so original and innovative, who with his playtest group had the impulse to apply it to other great classics during their evenings. It is not known if two “united” deities win together, if their powers are shared or in general how this gem will be integrated into the gameplay of Ankh: Gods of Egypt; however, we know that the possibility of "merge" will be detailed and not a free choice of the players. Finally, it seems that this mechanic exponentially increases the replayability of the title. 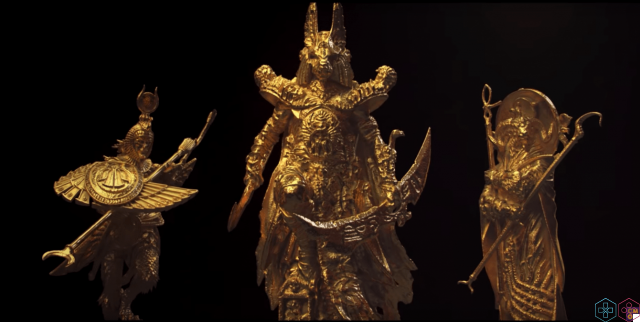 The premises seem to be those of a global success. It is true, CMON currently has been coming from a fluctuating year, in which it has attracted the discontent of the community for how it has managed some Kickstarter campaigns (exorbitant shipping costs, exclusive rewards of previous campaigns made available again, trend of Trudvang Legends even negative) and also we already know that it will not publish in any language other than English (except for sensational twists, definitely to be excluded).

However, looking at the success Blood Rage had in 2015 on Kickstarter, just under 10000 backers, and what Rising Sun had a couple of years later, with over 30000 backers, demonstrates how much the games of this mythological trilogy are appreciated and sought after by the general public; or rather, how the general public has learned to love them over time.
Recall that Rising Sun is currently none other than the tenth most funded game in history on Kickstarter; if Ankh: Gods of Egypt could even confirm such numbers, would probably be heralded as one of the most successful games ever!

Finally a little gem: CMON has released a teaser trailer of the game, enjoy!

add a comment of Ankh: Gods of Egypt, the gameplay of the next CMON hit