All-Star Fruit Racing, the Spanish kart game, currently in Early Access, is thrilling many PC gamers: let's see why in this review

As in any racing game, users will be able to face different types of races. In fact, in the offline, they will be able to gain fame and popularity in the career mode where they will have to fight to get the best score at the end of a racing season. For record lovers, All-Star Fruit Racing offers the opportunity to compete in the "Timed race " where you will compete to get the best time on the circuit. If, on the other hand, you want to improve on a track or become familiar with the controls, you can play in customize mode by setting a game freely. Furthermore, as confirmed by the developers, it will be possible to play in LAN up to 4 players in shared screen. In the online mode, not yet available in the Early Access version, it will be possible to play against 7 other players in casual or ranked races.

However, what is immediately striking about this game is the theme around which it was created: fruit. In fact, the creators have created every single element of the game world taking a cue from it. Chief among them is the world itself; five islands, each with different paths, characterized by different climates and by the fruits that grow there. Everything is very fluid and well defined thanks to the engine Unreal Engine which is not affected, even in moments of maximum stress due to the colorful animations, of frame drops. This world, characterized by bright colors and with a very successful audio sector, makes very enjoyable and addicting game without ever tiring the player's eye.


As for yours map, you can choose three different assets, in terms of technical characteristics, and it will be possible to customize them aesthetically in infinite ways. The choice of inserting curiosities about the world of fruit in the upload screen is very apt and fun. The gameplay is very simple and immediate both on the keyboard and on the controller. However, if you need any clarification, the developers have integrated some rich and detailed tutorials that will be able to clarify all your doubts. 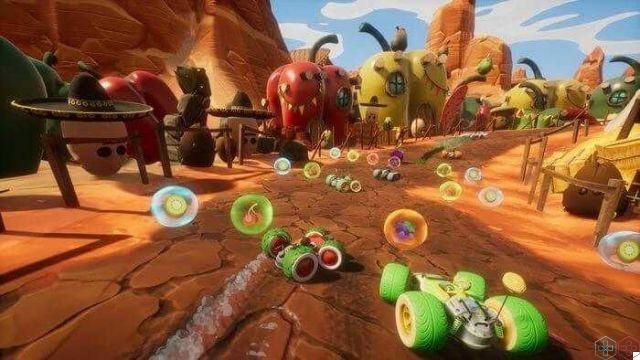 If at first you can breathe an air of already lived for the resemblance with the great titles of this genre, such as Mario Kart o Crash Bandicoot Team Racing, just after playing a dozen games you feel a deeper level of play.

In All-Star Fruit Racing at the start of the race you will be asked to choose one character, among 21 at your disposal. Each character will be equipped with a super that, depending on the skill of the user, will be able to overturn the results of a race. During the race you will also collect fruits, four types to be exact, which will fill four tanks of the Juicer. As soon as you have loaded one of the tanks you can use a skill, attack or defense, connected to it. Loading more than one you can combine skills of two or three tanks, giving life to very powerful power ups. With all four tanks full you can use your super ability. This enriches the game with a strategic side of considerable impact. It will therefore not be enough to have a “little push” from luck but a strategy matured by experience will have to be developed.

We are at "Frutta"

Ultimately, All-Star Fruit Racing is a game that makes its way through kart games with its own innovations and its playfulness. A game that easily engages the user and that entertains with its originality. A game that, however, must be played carefully to learn the large number of combinations of attacks and strategies available. It is currently available in Early Access a 14,99€ su Steam. The final version will be available soon and news for the console versions are awaited.