Agents of Mayhem review: the heir of Saints Row

Let's discover this new Volition title together. On Agents of Mayhem, Saints Row's spiritual heir, we have many expectations. Will he be able to satisfy them?

Not all cakes come with a hole

Put your Saints Row they are characterized by bizarre plots bordering on the impossible, with unlikely events and stories. And once again the idea is to propose an extravagant plot that borders on unrealism: aanti crime agency who has to fight against an association of "madmen", ready to do anything to alter reality as they please.

It all sounds very good for the music of the series, but the idea isn't all that engaging. This is mainly due to the fact that there is no real protagonist.

In Agents of Mayhemin fact, the player impersonates the whole agency and has at his disposal a large number of agents. Certainly this offers one great variety in gameplay (more on that later), but at what price? None of the “good” characters are particularly charismatic and we don't identify with any of them, especially since each time we will play a team of 3 agents and not a single one. In short, we will no longer be the cool boss on duty.

Those who have charisma are the bad guys. Too bad that often, however, they make completely nonsense decisions, which contribute in large part to their final failure and therefore to the foregone victory of the player. 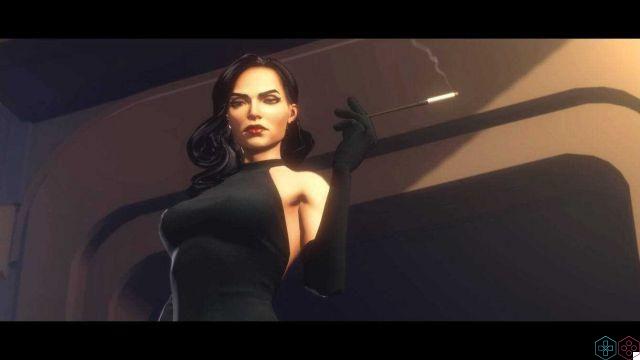 Too bad, impersonating the Mayhem in a grueling fight against the Legions, it seemed extremely engaging. An entire agency in our hand and many characters, all very captivating. But let's face it, without a charismatic leader the Saints formula does not work.

The bad guys have the leader (and the name alone sparkles charisma from everywhere), why can't the good guys have it? We fight against the perfect embodiment of evil, against a ruthless leader who does not hesitate to beat up his subordinates. And U.S? We are nothing more than a hodgepodge of people with various mismatched deviations. 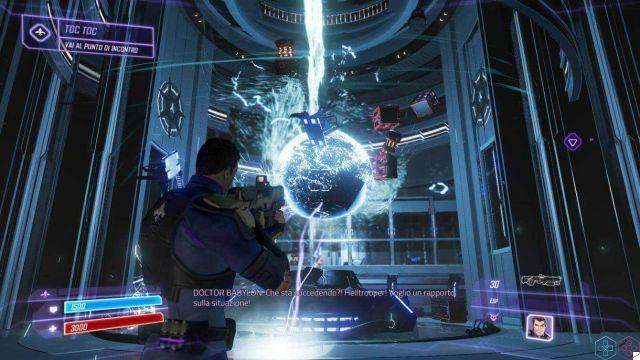 The are interesting micro plots on the life and history of the various agents, it's a pity that none of them are in-depth and some lead to banality. It's okay to play on stereotypes (typical of the Saints formula), but it's bad to do it repetitively as in this case.

The game world then offers nothing particularly intriguing: a discreetly constructed common open word, this is what transpires. A little disappointing for a title whose universe derives from one of the endings of Gat out of Hell. In short, we expected a lot and, at least on the plot and setting (funny point of the various Volition titles), we were very disappointed.

The settings of Agents of Mayhem are well done, but they are an end in themselves

In Saints Row the maps were always very large and well constructed; the player was able to move and feel totally free. The game world therefore appeared extremely engaging and well constructed and, in each title of the series, there were very interesting peculiarities and secrets.

In Agents of Mayhem everything revolves too much aroundgame hub and the city of Seoul, although well built, appears as a mere outline, a "container" of main and secondary quests. Sure, the futuristic setting makes a good impression, but an end in itself. The world is really well done but the player tends to spend little time in it: he travels it not to explore but to carry out the various missions. Therefore, all the work done on the setting gets lost and takes a back seat. 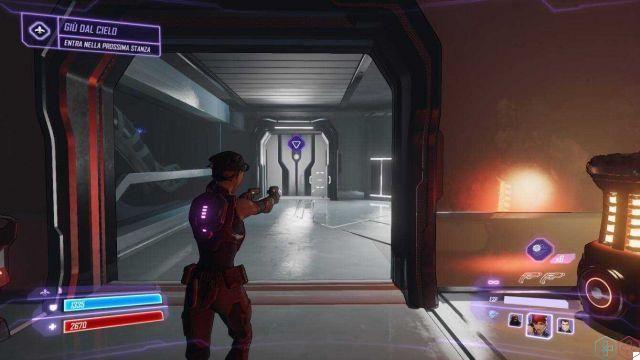 The quality of the graphics engine is good, but it doesn't scale well on all configurations

Il graphic engine of the game instead has fluctuating performance. It returns, in the utmost detail, an incredible quality. There is nothing that doesn't seem to come off the screen, but it turns out to be woody. The frame-rate with top configurations remains constant but, lowering the details (even to a minimum), the FPS gain is not so evident, even at the cost of losing all the beauty of the game.

There is also, but it is not the only title lacking in this, an option to modify the FOV and therefore minimize the problems for players suffering from motion sickness. It would have been an excellent added value for a title that in itself is very hectic and therefore potentially the cause of this disturbance. 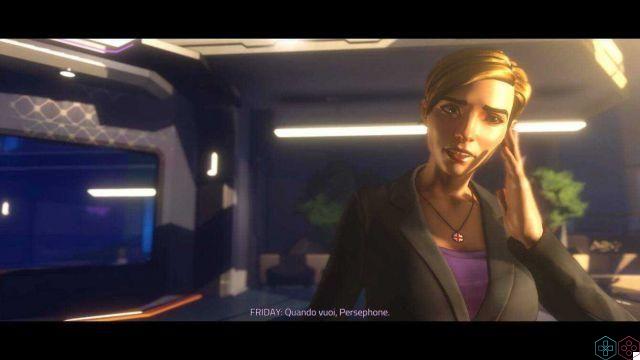 Discreet sound compartment. Agents of Mayhem does not shine, but neither does it disappoint on this point of view. In any case, we would like to point out that the game it is stable on every configuration (able to run it, of course) and from the beginning it does not have crashes or other annoying problems; so no mega patches or anything else. In a world of day one updates, this is a commendable fact: the product already works well out of the box.

Agents of Mayhem focuses on gameplay to differentiate themselves from the previous chapters of the saga. Up until now we had been used to having as charismatic protagonist as we could customize and make ours, thanks to the various weapons that can be equipped and the various outfits / upgrades.

This is totally different in Agents of Mayhem. We have various agents available, which we can upgrade as we progress through the game at the main hub. However, each agent will have a own set of weapons and skills, then it is up to the player to choose the group of agents to suit their style of play. The weapons of each agent are varied, and are often linked to his peculiarities and character. 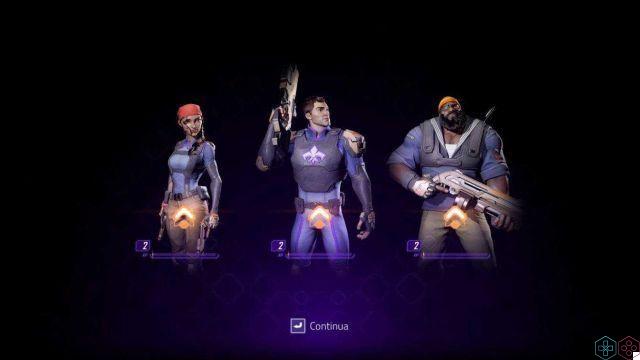 Agents, as they are used, level up by unlocking additional damage, skin skill e upgrades / skills. These can be used to customize the individual agent.

During the missions we will always have a team of 3 agents, each with a vitality bar, a shield and the “Mayhem“ bar. The first two work as in any fps: lo shield it discharges if hit and recharges while you repair. There vitality drops if we are hit while the shield is unloaded. If the vitality drops to zero the character is no longer playable in that mission, unless a symbol of Mayhem which reloads its stats. When a character has low vitality we can change it to one of the other two and, while not in use, the damaged character's vitality is restored. Finally, the Mayhem purple bar allows, once loaded, to use a character ability. 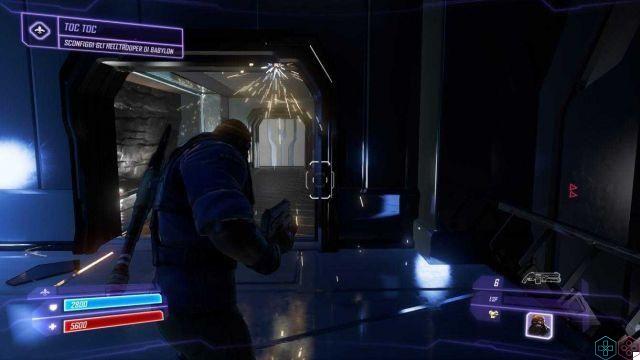 The gameplay is the strong point of Agents of Mayhem, but the gaming experience is still ruined by some flaws

The bar varies from character to character and can be suitable for particular missions / enemies. Right on missions there are two defects to report. The first, and most serious, concerns the fact that once you arrive at the check point, in case of need to stop the game, it will have to be started again. Second deficiency, it is not possible to do only the main quests, but these secondary ones must be completed in order to advance in the game. Also there is the mode of global conquest, where it is possible to fight to control other regions of the world as well. You can too strengthen the agency in classic Saints style. The gameplay it is basically the best part of the game, pity only about the longevity and the repetitiveness of some mechanics and actions: for example, the various bosses are defeated with practically identical dynamics.

Agents of Mayhem, all very interesting but ...

Agents of Mayhem it is certainly an interesting title to play, but it does not shine in anything. It has a lot to offer, but it is often associated with its spiritual predecessors and this juxtaposition makes it lose many points that it really doesn't deserve to lose. The main flaws are the inconsistent plot and consequently the repetitive quests, but the rest is promoted.

Definitely recommended to anyone looking for a Light FPS, to be played without too much effort.

7 Without too much effort

Akuma no Gakko review: at school with spirits and demons ❯

add a comment of Agents of Mayhem review: the heir of Saints Row